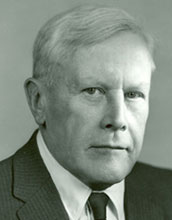 The first director of the National Science Foundation (NSF) served two full terms from April 1951 through June 1963. "A quiet individual, a real scholar and decidedly effective in his quiet way, for everyone likes him and trusts him," was the way Vannevar Bush described Alan Waterman. Detlev Bronk, who chaired the National Science Board during Waterman's years as director, thought he was a "kind and gentle" man, but also someone who could be "firm and exacting ... and persistent in the fulfillment of his duties."

Educated at Princeton University, Waterman received his Ph.D. in Physics in 1916. After graduation, he taught physics at the University of Cincinnati. During World War I, his academic career was interrupted by two years with the Science and Research Division of the Army Signal Corps. He then returned to teaching, at Yale University, until the outbreak of World War II. His career with the government during the war included service with the National Defense Research Committee and the Office of Scientific Research and Development. In August 1946, he became deputy chief and chief scientist of the Office of Naval Research.

Waterman shaped the NSF, starting with the decision to award grants rather than contracts and the use of panels of non-NSF scientists and engineers to provide advice to the staff on the quality of proposals. During his tenure as director, NSF's budget rose from $3.5 million to more than $320 million.