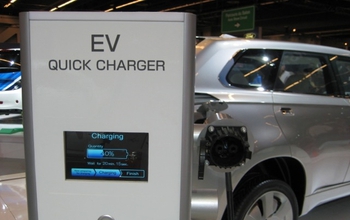 A good network for charging electric cars may reduce problems with limitations in driving range.

When engineers design environmentally-friendly cars, such as all-electric or hybrid vehicles, they often focus primarily on their technological features. Ricardo Daziano believes they also should consider the "human" element.

By this, he means they need to keep in mind the kinds of things consumers actually want from a "green car," and how these preferences will influence their buying decisions. While technology is important, he believes that engineers no longer can focus on it in isolation. It's not enough to create technically sound solutions if society isn't willing to adopt them.

While many consumers support the concept of sustainable energy cars, this doesn't always mean they will buy them. "This technology often is more expensive, so one question becomes whether consumers are willing to spend a lot of money now for cost-saving benefits that will come later?" he says.

"It's an energy paradox," he adds. "You do have the savings, but they come later. People like to have money now, rather than in savings. It's human nature. It may be difficult to sell the idea that this vehicle costs more now, but will save money in the future."

Daziano, assistant professor in the school of civil and environmental engineering at Cornell University, who teaches economics, has a social science background and believes that technical solutions for society's problems, such as the need for sustainable transportation, must reach beyond the technology into the psyche.

He already has learned, for example, that one of the reasons the Toyota Prius has become so successful is because it is instantly recognizable as a hybrid, unlike those made by other manufacturers which fail to stand out, "Other car makers have hybrids, but they look like their other models," Daziano says. "People want a car that will tell the world: ‘I'm green."'

In other preliminary results, he has found that women appear likely to spend up to $2,000 more than men for an energy efficient car.

Daziano is conducting his research under a National Science Foundation Faculty Early Career Development (CAREER) award, which he received earlier this year. The award supports junior faculty who exemplify the role of teacher-scholars through outstanding research, excellent education and the integration of education and research within the context of the mission of their organization. He is receiving $410,000 over five years.

The project is studying data already collected by research centers in Germany, Italy, Canada, and California where scientists conducted consumer surveys asking people about their car buying choices, and how they arrived at them. Daziano is using a special computer algorithm to analyze them.

"I'm trying to determine the tradeoffs people make," he says. "How they process this information. Each car has different characteristics, and I want to see how they combine them to decide on the car they want." Ultimately, "we will be able to forecast how people will react if we make changes in the cars," he adds.

For example, "people may like the idea of a 100 percent electric car, but they still may hesitate to buy one because of its limitations," he says. "All-electric cars have a limited driving range, which is the maximum you can drive in the car, and there is this concept we call ‘range anxiety,' when you are concerned that the battery will die and you will not reach your destination. Also, we do not yet have a lot of charging stations available, certainly not like gas stations, which increases the anxiety."

He hopes the information he gathers will influence both auto makers and policy makers. "If I can determine from the point of view of the consumer the optimal driving range that will make them comfortable with an all-electric car, then hopefully the engineers will be able to come up with a battery that offers more," he says.

One research challenge is to find a way to incorporate consumers' wide-ranging and different tastes. "Consumers are heterogeneous," he says. "There are people who prefer luxury cars, others prefer power and space, while others care about color. That's why every car maker has a range of vehicles they offer. They need to address many things in their models.

"If everyone behaved the same, these would be easy problems to solve," he adds.

He already has begun to introduce these ideas into the engineering curriculum, where students "need to understand that we are doing these technologies for people," he says.

"They need to consider people in the design process," he adds. "We are splicing this into discussions in the classroom, for both graduates and undergraduates. They were not aware of this social component of engineering. Modeling consumer preferences is something completely new for engineering students."