Pollinators such as bees play an important role in agriculture, but are under threat 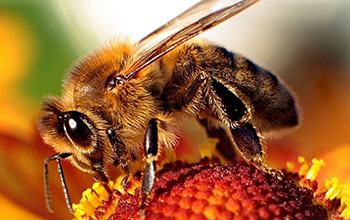 But some of those busy bees are headed for crisis. One-third of managed honeybee colonies die each winter in the U.S., and populations of many wild pollinator species are showing declines as well.

Using publicly available price and production data and existing pollination field studies, the team determined the economic dependence of U.S. crops on insect pollination services at the county level; the researchers also determined areas where the habitat for wild pollinators has been reduced.

One key finding is that the economic value of insect pollination totaled $34 billion in 2012. The U.S. National Science Foundation-funded team looked at 2012 because it was the most recent year for which data were available. The results of the research are published in the journal ES&T.

"The value of insects as part of our economy is apparent when you look at the well-established connection between farming and beekeeping," said Khanna. "We've found that some of the areas that are economically most reliant on insect pollinators are the same areas where pollinator habitat and forage quality are poor."

The researchers found that 20% of U.S. counties produce 80% of total economic value that can be attributed to wild and managed pollinators. Their findings will inform conservation efforts and ensure sustainable production of key crops.

"This research underscores the critical role pollinators play in the economy and welfare of the nation," said Bruce Hamilton, a program director in NSF's Directorate for Engineering.