Researchers placed nanosensors in microfibers to create a 'smart bandage' 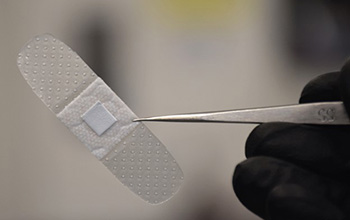 Researchers have placed nanosensors in microfibers to create a 'smart bandage.'

Bandages are great for covering wounds, but they would be much more useful if they could also detect infections.

By embedding nanosensors in the fibers of a bandage, U.S. National Science Foundation-funded researchers Daniel Roxbury and Mohammad Moein Safaee of the University of Rhode Island have created a continuous, non-invasive way of detecting and monitoring an infection in a wound.

"Single-walled carbon nanotubes in the bandage will be able to identify an infection in the wound by detecting concentrations of hydrogen peroxide," said Roxbury.

Until now, the challenge with using nanotubes for this purpose has been immobilizing them in a biocompatible manner such that they stay sensitive to their surroundings, according to Roxbury.

"The microfibers that encapsulate the carbon nanotubes accomplish both these tasks," Roxbury said. "The nanotubes do not leach from the material yet stay sensitive to hydrogen peroxide in the wounds."

The "smart bandage" will be monitored by a miniaturized wearable device that will wirelessly detect the signal from the carbon nanotubes in the bandage. The signal can then be transmitted to a smartphone-type device that would automatically alert the patient or a health care provider.

"This device will be solely used for diagnostic purposes," said Roxbury. "The hope is that it will diagnose an infection at an early stage, resulting in fewer antibiotics and preventing drastic measures, such as limb amputation. We envision this being particularly useful in those with diabetes, where the management of chronic wounds is routine."

The technology behind the smart bandage is described in an article in Advanced Functional Materials.

The next stage of the project involves verification that the bandage functions properly in a petri dish with live cultured cells found in wounds.

"This technology will improve the quality of life for the general public, especially those in remote or rural areas," says Nora Savage, a program director in NSF's Directorate for Engineering.