Molecular Robots On the Rise 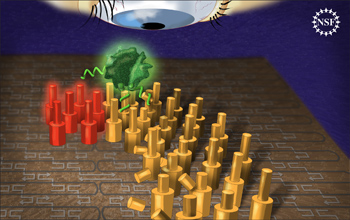 Researchers have created and observed a molecular robot capable of many steps, and of making decisions where to step and how long to stay. As the robot walks on the substrate, it changes each piece by cleaving off a part. If it touches a spot that has been cleaved already, it does not linger as long. The end of the track glows red and captures the robot, letting the researchers know when it has completed its walk. The robot glows green, allowing for the researchers to see it better.

Download the high-resolution JPG version of the image. (712 KB)

In recent years, scientists have been working to create robots that consist of a single molecule. Until recently, these robots have been able of only brief, directed motion on a one-dimensional track. Now a team of researchers have successfully created molecular robots capable of simple robotic actions within a defined environment autonomously, including the ability to start moving, turn, and stop. The researchers believe the process they have developed to achieve these tentative first steps may allow for more complex robotic behavior from these tiny robots. Milan Stojanovich, representing team of researchers from four institutions, discusses the team's work and its potential for future progress in this new field.