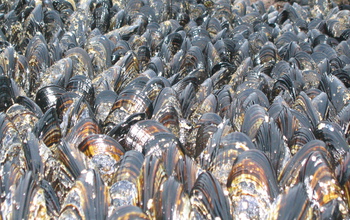 A dense bed of mussels, the dominant competitor in intertidal ecosystem along the West Coast.

A team of researchers from Northeastern University and Oregon State University published results in Nature today investigating the effects of climate change on coastal ocean upwelling, the process by which deep, cold waters rise toward the surface, bringing nutrients.

The results indicate that by the end of the 21st century, periods of annual upwelling in particular coastal areas will lengthen and intensify, while the differences in upwelling across latitudes will diminish.

The findings are the product of a unique comparison of 22 state-of-the-art climate models from research groups all over the globe, and represent one of the first studies in coastal upwelling to use multi-model or ensemble modeling. Instead of running a single model or averaging the results of several models, the researchers carefully compared the output of 22 climate models charting changes over 150 years (from the mid-20th to the end of the 21st century) to find places of agreement and disagreement. The places of agreement, like the changes in ocean upwelling, represent high-confidence projections shared independently by most climate models.

The study, led by Daiwei Wang, a postdoctoral researcher at Northeastern University, predicts an increase in the duration of upwelling periods by as much as one to two months by the end of the 21st century. Tarik C. Gouhier and Auroop R. Ganguly (Northeastern University) and Bruce A. Menge (Oregon State University) co-authored the report. [Nature published a companion commentary highlighting the significance of the results.]

"Our study found consistent changes in the high-latitude regions of those upwelling systems," said Daiwei Wang. "In particular, upwelling will start earlier in the spring and end later in the fall and will also increase in intensity."

Only about 2 percent of the area of the world's oceans, the regions of coastal upwelling contribute to more than 20 percent of global fishery catches.

"Upwelling is the mechanism that brings nutrient-rich waters from the deep ocean to the surface where it can help sustain all kinds of biological activities, from phytoplankton, the smallest creatures in the ocean, all the way to fish, marine mammals and sea-birds," Wang said. "The whole coastal ecosystem is actually fueled by the upwelling."

What the ecological effect of increased upwelling will be is an area of active research, the researchers said. Up to a certain point, increases in upwelling promote the abundance of organisms in the ocean as nutrient-rich deep waters "fertilize" the coastal ecosystem. However, too much upwelling can have adverse effects.

"If it gets beyond a certain level, the system goes into hyperdrive and then it can become what is sometimes called a dead zone," said Auroop Ganguly, associate professor of civil and environmental engineering at Northeastern.

Climate-induced changes in the ocean will also alter the spatial gradient in upwelling, essentially making the conditions at different latitudes more similar to each other than in the past. This could affect biodiversity.

"Marine species are distributed across the globe in different ways based in part on the ocean climate at different parts of the globe," Ganguly said. "If that variability is reduced, that may have an adverse impact on biodiversity."

The research is supported by the National Science Foundation and is part of an Expedition in Computing project titled, "Understanding Climate Change: A Data Driven Approach," led by the University of Minnesota.

In July 2014, Ganguly and Evan Kodra, also of Northeastern, published results in Nature's Scientific Reports predicting a wider range of temperature extremes in the future. The group has also applied their data-driven methods to historical droughts and changes in the Indian monsoon.

The research by Kodra and Ganguly in Scientific Reports is unique in a number of ways. First, the results of the team's study are regionally specific and high-resolution, whereas the outputs of most coupled ocean and atmospheric models are global and lower-resolution. Second, the team uses sophisticated data mining methods to uncover insights from multiple studies, rather than relying on any one model output. This approach, sometimes called "climate informatics" combines climate science with approaches from statistics, machine learning and data mining.

In the case of the ocean upwelling, there has been a historical dearth of data, and whatever data exists is often spotty and equivocal. For this reason, it is important to create projections that take into account the variety of assumptions that climate models use and that assess the uncertainty associated with forward-looking models, as Ganguly's group does.

"It has been a long-standing problem about how coastal upwelling is changing in a global warming scenario," said Wang. "Historical analyses of those systems are sometimes contradictory to each other, so we were surprised to see the consistency of the results among the models."

"The results of Ganguly and his team's Nature study are important for understanding the regional impacts of climate change in the ocean," said Chris Clifton, a program officer at the National Science Foundation. "However, they also help motivate new approaches in the field and inspire researchers with diverse skills to apply their expertise to climate science."

Last September in Boulder, Colo., the National Center for Atmospheric Research hosted the 4th Climate Informatics Workshop, a sign that increases in the amount of data and the ability to mine that data are having an impact in the field.

"The data we collect in a day--from satellites, observations in the ocean and also from model outputs from those different models--may be equal to the data that we collected over a decade ten years ago," Wang said. "There's an opportunity for us to dig deeper into those data sets to find insights that can be complementary to the physically based climate studies, and help tackle some of the problems that are difficult to solve using conventional scientific methods."