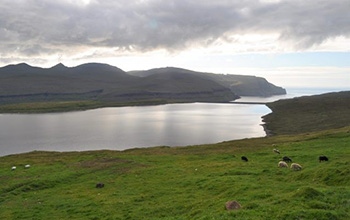 This lakebed on the island of Eysturoy contains sediments that document the first arrival of sheep.

New evidence from the bottom of a lake in the remote North Atlantic Faroe Islands indicates that an unknown band of humans settled there around A.D. 500 -- some 350 years before the Vikings, who until recently were thought to be the first human inhabitants. The settlers may have been Celts who crossed rough, unexplored seas from what is now Scotland or Ireland. The findings appear in the journal Communications Earth & Environment.

The Faroes are a small, rugged archipelago about midway between Norway and Iceland, some 200 miles northwest of Scotland. Towering cliffs dominate the coasts; buffeted by strong winds and cloudy weather, the rocky landscape is mostly tundra. It is one of just a few lands that remained uninhabited by humans until historical times.

Past archaeological excavations have indicated that seafaring Vikings first reached the area around A.D. 850, soon after they developed long-distance sailing technology. The settlement may have been a steppingstone for the Viking settlement of Iceland in 874, and their short-lived colonization of Greenland around 980.

The U.S. National Science Foundation-funded study, led by scientists at Columbia University's Lamont-Doherty Earth Observatory, is based on lake sediment samples containing signs that domestic sheep suddenly appeared around 500, well before the Viking occupation. Previously, the islands did not host mammals, domestic or otherwise; the sheep could only have arrived with people. The study is not the first to assert that someone else got there first, but the researchers say it clinches the case.

The Faroes contain very few sites suitable for settlement, mainly flat areas at the heads of protected bays. "You see the sheep DNA and the biomarkers start all at once; it's like an off-on switch," said Lamont-Doherty paleoclimatologist William D'Andrea, who co-led the study.