Before William Stokoe's groundbreaking research, American Sign Language (ASL) was erroneously viewed as a pantomime, a poor substitute for spoken speech. Now ASL is recognized as a language with its own syntax, morphology, and structure. 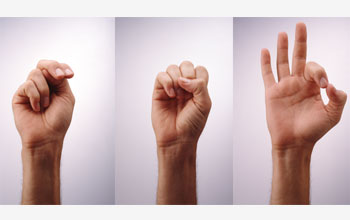 For deaf and hard-of-hearing individuals, sign language provides a clear and effective means of communication. Yet, from the late-1800s until the mid-1900s, signing was viewed as a substandard practice -- one that could hinder a deaf individual's ability to communicate with hearing people.

Beginning in the 1950s, that view began to change. Today, signing is understood to be critical to helping many deaf people communicate with each other and with those who can hear, and ASL is also recognized as a fully formed language with its own syntax, morphology (rules for word creation), and structure. William C. Stokoe, an English professor who joined the faculty of Washington, DC's Gallaudet University (then College) in 1955 deserves much of the credit. While teaching the works of Chaucer at the institution for deaf and hard of hearing individuals, he noticed students using American Sign Language (ASL) in spite of social and educational trends. Although an Old and Middle English scholar by training--not a linguist--Stokoe was convinced ASL was a true language worthy of academic pursuit, not ridicule.

In 1960, Stokoe received his first grant from NSF to study ASL--to determine its structure and form. His was the first linguistic study of that language. With additional NSF grants, Stokoe went on to create, with two Gallaudet colleagues, the Dictionary of American Sign Language on Linguistic Principles in 1965.

Before Stokoe's work, educators favored the "oralist" educational approach advocated by famed inventor Alexander Graham Bell. The approach emphasized teaching students to read lips and pronounce words without the use of signing. During this time, some schools even used physical punishment if deaf students tried to use sign language.

Both NSF and Stokoe were originally criticized for his research efforts, yet ultimately critics were silenced by Stokoe's results. He proved that ASL was a language under definitions set by linguists. The research has revolutionized deaf education in the United States. Educators now know that children who use signing from a young age develop a full range of cognitive skills. Stokoe's dictionary, re-published in 1976, is an established reference and a text for educators. ASL is even an independent research discipline, with graduate courses and doctoral studies in universities in the United States and abroad. NSF continues to support linguistics research through the division of Behavioral and Cognitive Sciences within NSF's directorate for Social, Behavioral and Economic Sciences.