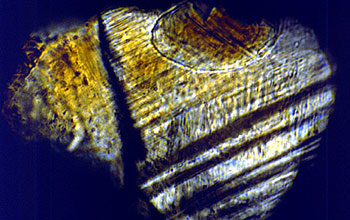 Most Earth scientists now agree that 65 million years ago, an enormous space rock slammed into what is now Chicxulub, Mexico, triggering a mass extinction. The extinction separates the Cretaceous Period of the dinosaurs from the mammal-dominated Paleocene Period; yet, fossils and sediments nearest the crater were mixed by the impact, obscuring clues that could tell researchers if extinctions could be directly linked to the catastrophe.

In 1996 and 1997, two teams of Ocean Drilling Program (ODP) scientists found critical evidence that would conclusively tie the Cretaceous-Paleocene (K/P) impact with the catastrophic extinction.

ODP explores Earth's structure and evolution, primarily through the study of sediment and rock cored from below modern and ancient seafloors using ship-mounted, and some truck-mounted, drill rigs. Funded by NSF and 21 foreign nations, ODP has been critical to Earth science research since its inception in 1968.

In 1996, Rutgers University researchers Kenneth Miller, Richard Olsson, and James Browning, along with Daniel Habib of Queens College and Peter Sugerman of the New Jersey Geological Survey, used a truck-mounted drill rig to core beneath Bass River State Park in New Jersey. About 384 meters (1260 feet) below the surface, the team found an unbroken layer of K/P sediments.

"Mass extinction is clearly at the boundary," says Olsson, "[and] it took up to 4 million years for the oceans to recover from the mass extinction event."

As important, the two plankton groups were separated by a discrete layer of spherical and oval pellets – altered remnants of melt glass known as microtektites that were blasted out of the impact crater. Bass River contains the most distant K/T microtektite layer that researchers have found, lying ~2500 kilometers from the crater.

The evidence countered the other leading hypothesis, based upon previous studies in the Gulf of Mexico, which suggested Cretaceous plankton seemed to live on after the impact. However, the Gulf is close to the impact, and the 3000-foot-high tsunami that many scientists believe was triggered by the catastrophic explosion mixed older and younger fossils.

Because of the unbroken progression of biologic and geologic changes, the Bass River cores show the extinctions occurred precisely at the same time as the impact, "the alternate interpretation that Cretaceous plankton continued to live on after the impact," says Miller, "has basically been debunked."

In 1997, an equally important core was found by Richard Norris of Woods Hole Oceanographic Institution, Dick Kroon of Free University, Amsterdam, Adam Klaus of the Ocean Drilling Program, and Brian Huber of the Smithsonian National Museum of Natural History in Washington, D.C.

Drilling more than 100 meters below the Atlantic seafloor, 300 miles off the coast of Florida, the ODP researchers found another continuous layering of K/P boundary sediments. The scientists were aboard the JOIDES Resolution, the 469-foot long research flagship of ODP.

While the Bass River core shows a gap in sedimentation a few centimeters above the boundary, the Blake Nose core is more complete. In addition, due to the proximity to the impact, the tektite layer was 17 cm thick, nearly nine times as thick as the Bass River core. The Blake Nose core is currently on display at the Smithsonian National Museum of Natural History in Washington, D.C.

Says Norris, "17 cm of impact debris is a lot. Imagine that raining down on North America. That much hot gas would incinerate much of the continental United States and trigger wild fires that have been hypothesized by previous workers."

Subsequent studies by Norris, Klaus, and their colleague at ODP John Firth have shown that the impact triggered massive submarine landslides all along the east coasts of the United States and Canada. The slides created a debris deposit of several million square kilometers that reaches over 1400 km off shore.

"The New Jersey core," says Norris, "shows evidence of this massive event since the interval within and above the impact layer contains chunks of mud ripped up from the continental shelf. Such large-scale submarine slides were probably triggered by the enormous earthquake that was produced by the impact."

Additional studies have provided further evidence for the widespread impact effects, showing that sands from shallow waters were mixed in with sediments from much deeper ocean clays, and confirming that the plankton did not go extinct gradually – the change was sudden.
-- Josh Chamot