Researchers investigating several puzzling plane crashes in the mid-1970s identified 'microbursts'--dangerous gusts of wind--as the probable cause. The discovery led to better warning systems and pilot training, and to safer skies. 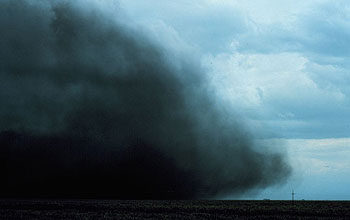 During a storm, powerful downdrafts of air can form, blasting towards the Earth with explosive force. Microbursts--drafts only several hundred yards wide--can gust at speeds approaching 150 miles per hour, and can be particularly dangerous for aircraft that are taking off or landing. Before the introduction of Doppler radar weather-detection systems at airports, scientists estimate that microbursts caused as many as 20 major airline accidents, resulting in over 500 deaths.

One of those accidents was the crash of Eastern Airlines Flight 66 as it attempted to land at New York's JFK International Airport in June 1975. University of Chicago meteorologist Tetsuya "Ted" Fujita suspected that microbursts were behind the deadly accident. Fujita was a pioneer in the field of "mesometeorology"--the study of middle-sized weather phenomena such as tornadoes and hurricanes. Collaborating with his wife, Sumiko, he created the F0-F5 tornado severity scale in 1971. Later, as he flew over an area in the Midwest that had been devastated by an outbreak of tornadoes, Fujita noticed a starburst-like pattern in the uprooted trees and the observation led him to theorize about microbursts. The theory met with skepticism at first. Until the mid-1970s, most researchers believed that downdrafts would substantially weaken before reaching the ground and not pose a threat to aircraft. They blamed tornadoes and gust fronts as the primary causes of storm damage.

In 1977, NSF's Geosciences Directorate provided support for Fujita to conduct the NIMROD (Northern Illinois Meteorological Research on Downburst) project in collaboration with the National Center for Atmospheric Research (NCAR)--a laboratory for which NSF has been the primary sponsor since its inception in 1960. NIMROD field experiments took place in the spring and summer of 1978, using three Doppler radars and other equipment. NCAR researchers had recommended Doppler because they were finding it effective in "seeing" air motions within storms. On May 29, Fujita and NCAR's James W. Wilson recorded the first microburst observed on radar. What they saw confirmed Fujita's hypotheses. By NIMROD's end, about 50 microbursts had been detected.

NIMROD was followed by further NCAR collaborations with the Federal Aviation Administration (FAA), National Oceanic and Atmospheric Administration (NOAA) and researchers at a number of universities. These included the Joint Airport Wind Shear (JAWS) project in Denver, Colorado, in 1982, the Microburst and Severe Thunderstorm (MIST) project near Huntsville, Alabama, in 1986, and the Convective INitiation and Downburst Experiment (CINDE) near Denver in 1987.

The collection and analysis of data developed through these efforts led to widespread agreement that microbursts exist. The findings helped convince the FAA and international aviation authorities to develop radar-warning systems to detect wind shear threats and to institute worldwide training programs. The FAA's Terminal Doppler Weather Radar was installed at major airports throughout the country, and pilots are now required to take microburst and wind-shear training courses and practice maneuvers in flight simulators.