An NSF-funded project that monitors the brightness of stars has given astronomers a potent tool for discovering planets far beyond our part of the galaxy. We can expect to find more "exoplanets" in the decade ahead. 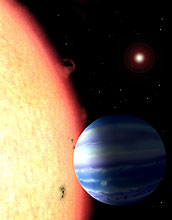 More than 100 planets have been discovered outside of our solar system. These extrasolar planets (or "exoplanets") are so small and far from Earth that we can't see or photograph them. However, astronomers can infer their existence by observing the slight "Doppler shift" in starlight caused when an orbiting planet's gravity tugs at its home star.

In astronomy, the Doppler shift refers to measurable changes in wavelength across the electromagnetic spectrum. For light, the result is a slight shift in color -- similar to the Doppler effect in acoustics, where a shift in the frequency of sound waves results in changes of pitch.

Current telescope technology limits the reach of Doppler searches to the brightest stars within about 100 light years of Earth. But planet-hunters have a new tool that has expanded their search to include thousands of stars up to 5,000 light years away. It's called OGLE -- and it's changing the way astronomers operate.

The Optical Gravitational Lensing Experiment is a long-term, NSF-funded research project that began sky searches for stellar variability in 1997. OGLE (a collaboration between Princeton University astrophysicist Bohdan Paczynski and a team of astronomers from Poland's Warsaw University Observatory) tracks starlight with a 50-inch telescope based at the Carnegie Institution of Washington's Las Campanas Observatory in Chile.

OGLE research is about photometry, the technique in astronomy that deals with measuring the intensity of light. The Las Campanas team is recording the small reductions in brightness that occur when planets and other "dark matter" pass between a distant star and the Earth. Using the photometric transit method, OGLE researchers are monitoring the light from 100,000 stars and sharing datasets for 100 of those stars on the Internet. Astronomers focusing their planet searches on OGLE candidate stars -- the stars most likely to have transiting objects close to them -- have been rewarded.

"Follow-up observations of a number of these candidates by other investigators have detected the first definite case of a planetary companion," says Paczynski, OGLE's team leader and the Lyman Spitzer Jr. Professor of Astrophysics at Princeton University.

After examining 59 candidate stars identified by the OGLE survey, astronomers from the Harvard-Smithsonian Center for Astrophysics (CfA) confirmed that one star OGLE was tracking did indeed have a planetary companion. On January 6, 2003, the CfA team announced the discovery of OGLE-TR-56b -- a Jupiter-sized planet that circles its star every 29 hours. It was the first extrasolar planet discovered by the photometric transit technique and confirmed by spectroscopic follow-up (a detailed analysis of the light's spectrum).

"We are at the leading edge of extrasolar planet research and we are getting closer and closer to finding new habitable worlds like our own," reported Harvard astronomer Dimitar Sasselov in a CfA press release announcing the discovery.

In the summer of 2003, Dr. Paczynski and his OGLE colleagues collaborated with researchers in Japan and New Zealand to score another first: each team simultaneously discovered the same extrasolar planet, OGLE 2003-BLG-235, using a technique called gravitational microlensing.

Microlensing involves the unique alignment of two stars -- a distant "source" star and a "lensing" star located between the source star and the Earth. As light from the source star streams toward Earth, the gravity of the intervening lensing star bends the light rays. This creates a significant increase in brightness during the weeks or months that the two stars are in close proximity. Astronomers who constantly monitor dense star clusters have recorded several hundred microlensing events each year since the early 1990's.

As the search for additional exoplanets intensifies, Princeton's Bohdan Paczynski maintains his wide-angle focus on the stars.

"As an astrophysicist, I'm embarrassed to admit this, but approximately 90 percent of the bright variable stars have not yet been discovered," notes Paczynski. While all stars exhibit some variation in their brightness, however slight, astronomers are especially interested in the spectacular variability of stars that pulsate, shrink, or grow dim when eclipsed by "dark matter" in the galaxy.

In addition to his NSF-funded OGLE research, Paczynski is collaborating with Warsaw University Observatory colleagues on the ambitious All Sky Automated Survey (ASAS), also based at the Las Campanas Observatory. Using a group of telescopes with narrow, wide, and super-wide fields, the ASAS team is collecting data for 20,000 variable stars and posting it to the Web for use by other astronomers. This growing body of data could help generate a variety of scientific results, such as tracking large asteroids as they approach Earth, refining our use of stars to measure distances in space, and discovering unexpected events in the galaxy.

"Broadly aimed searches and monitoring projects, not focused on just one specific type of variability, can be developed at very modest cost," wrote Paczynski in a Spring 2000 Princeton Physics and Astronomy Colloquium abstract. "The single most challenging element is software: real time data processing and recognition of anything unusual yet real, data archiving, and data access over the Internet."

Remarkable advances in computer storage and retrieval capacity are driving our understanding of "the diversity of the sky," says Paczynski. He notes that over the last four years, researchers have used state-of-the-art information technology to make three terabytes of OGLE data available each year to numerous teams of astronomers who use it to analyze the light from distant stars.