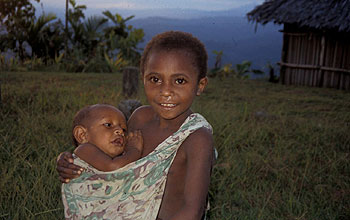 Au children in Papua New Guinea are typically carried by a parent, sibling or neighbor ...

In much of the developed world, popular wisdom holds that crawling is universal. All infants go through a crawling stage to gain the strength and coordination they need to take their first steps, right?

Not necessarily, say a number of researchers including David Tracer, an associate professor of anthropology and health and behavioral sciences at the University of Colorado at Denver. Since 1988, Tracer has been conducting field research among the Au people of Papua New Guinea--a nation of 1,400 islands and 4 million people north of Australia. That's where he observed that Au children do not crawl, but learn to walk anyway.

Infant crawling rarely happens in indigenous cultures, says Tracer, a biocultural anthropologist. He has documented that Au babies are carried by their mothers or siblings 86 percent of the time during the infants' first 12 months. When they are put down, the young children are usually placed in a sitting position, not on their stomachs. Instead of crawling, Au youngsters go through an upright "scooting" phase--pushing themselves along with their hands and scooting on their backsides.

The neuromuscular development of children is strongly conditioned by the cultural context in which they grow up and by the way the children are handled as infants, says Tracer. Au parents discourage crawling for good reason: In doing so they reduce the risk of their babies contracting parasites and diarrheal disease. Nutritional deficiencies also impact the development of Au children, who usually start walking a few months later than youngsters in the United States and Europe.

David Tracer didn't set out to study crawling. He was in New Guinea to explore the relationships between Au mothers and children, and to research child health issues such as nutrition, growth, and development -- with the help of a grant from NSF's Directorate of Social, Behavioral, and Economic Sciences (Division of Behavioral and Cognitive Sciences). But his early observation that Au children don't crawl led him into deeper explorations of culture, biology, and child development.

Tracer, along with graduate student Sara Wyckoff, applied the most widely accepted standard for measuring early childhood neuromuscular development (the Bayley Scales of Motor Development) to a sample of 113 Au children. These tests measure an infant’s ability to sit, stand, and perform in various ways that require the coordination of large muscles. The researchers conducted two series of tests on Au children, one in a horizontal posture and one in a vertical upright posture.

"These deviations from Western standards are conditioned by a cultural milieu in which children are carried more than 75 percent of the time and are discouraged from spending time in horizontal postures," says Tracer.

By contrast, most children in Western societies are encouraged to get plenty of tummy time. This remains true even though infants are often put on their backs to sleep in order to reduce the likelihood of Sudden Infant Death Syndrome (SIDS). Tracer suggests that crawling may have developed as recently as two centuries ago, as wooden floors and rugs replaced dirt floors, and parents began to feel that it was safe for their babies to crawl.

Tracer's work supports the idea that developmental milestones depend on opportunities, and opportunities vary with culture. In other words, babies are not hardwired for crawling: they may also scoot, roll, or slither their way to that universal goal--walking.