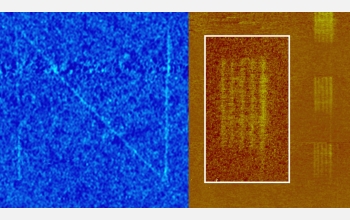 The new nanofountain probe produced these patterns; features are as thin as 40 nanometers.

The miniscule tip on an atomic-force microscope (AFM) helps researchers both "see" and manipulate the nanoscale environment. Now, engineers have created two novel technologies that enable such tips to write features as small as viruses and to withstand abuse with the resilience of diamond. Eventually, they believe, vast arrays of such nanofountain probes could prove useful for crafting such intricate systems as protein arrays or complex semiconductors.

By taking advantage of the same capillary forces that keep fountain pens flowing, researchers from Northwestern University in Evanston, Ill., created a specialized structure that channels inks from a tiny reservoir down to a miniscule AFM tip.

Existing "dip-pen" techniques utilize the same inks, which range from pigments for creating patterns to organic materials for creating sensors, but they suffer from difficulties with maintaining a regular ink supply. The new "nanofountain probe" can paint features as small as 40 nanometers and carries its own ink reservoir.

Horacio Espinosa and colleagues from the NSF Nanoscale Science and Engineering Center for Integrated Nanopatterning and Detection Technologies crafted the probe using standard microfabrication techniques, so device production is scalable.

The center, a collaboration among researchers from Northwestern University, the University of Chicago, the University of Illinois at Urbana-Champaign and Argonne National Laboratory, was also behind the development of another AFM breakthrough: single-piece, ultra-nano-crystalline diamond cantilevers and tips.

In addition to being extremely durable, the new tips are also crafted using standard microfabrication techniques and offer the same manufacturing advantages as the nanofountain probes.