Molecules Are Fossils, Too 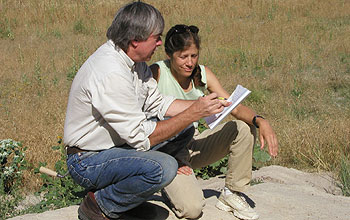 There's more to a fossil than meets the eye. Encased or protected by the minerals inside ancient bones, some proteins survive intact for thousands of years. By studying them, researchers are starting to solve mysteries about the lives and ancestries of long-dead creatures.

Generally, scientists study the relationships between modern and ancient organisms by examining differences in their DNA--the molecules that carry an organism's genetic blueprint from generation to generation. But DNA is fragile, which limits its survival over long periods of time. Getting at a fossil's full genetic profile, Jurassic Park-style, may forever remain a fantasy.

DNA molecules serve as templates for proteins, the molecular workhorses of the body. As a result, proteins too can tell a story about the ancestry of fossilized organisms, says Michigan State University zoologist Peggy Ostrom. Ostrom's work at the nexus of paleontology and chemistry has helped usher in a new field of scientific discovery, called paleoproteomics.

Though rich in information, DNA is made of long, fragile chains of molecules. DNA rarely survives in fossils for tens of thousands of years--let alone hundreds of thousands or millions. So historically, paleontologists have relied on similarities in bone structure to understand the biology of long-dead creatures and their lineages, known as phylogeny.

But there is another route to this ancestral information: In the last half of the 20th century, researchers began to recover protein fragments from bones preserved in permafrost using a technique called Edman sequencing.

"The idea of paleoproteomics is ancient proteins and modern proteins are similar--but not exactly the same," explains Ostrom, whose research is supported by the National Science Foundation's (NSF) Division of Earth Sciences. "In some cases, there are small departures in the sequence of a given protein that can tell you about the relatedness of organisms over time, or about the differences between ancient and modern organisms."

Abelson and others developed a way to identify the source of a fossil even when only a few bones remained. The work presented the alluring possibility of obtaining protein sequences via the Edman technique. But the approach came with limitations.

For one thing, at that time, Edman sequencing required the use (and destruction) of a large sample, and fossils are precious to those who recover and study them. For another thing, it was thought that only fossils recovered from frozen regions would bear useful proteins.

In February 2006, Ostrom showed otherwise. In a paper published in the journal Geochimica et Cosmochimica Acta, Ostrom and colleagues reported the complete sequence of a protein extracted from a 42,000-year-old fossil. The protein, osteocalcin, survived in the leg bone of a small, stout horse, even though the fossil had been recovered from a temperate area--Juniper Cave, Wyo.

The researchers used a newer, more sensitive technique to sequence the protein, and to their surprise, were able not only to describe the order of amino acid building blocks but also to identify clues about the protein's 3-D shape. It was the first time a complete protein had been isolated and sequenced from a fossil found in a temperate region.

"I was pretty astounded that we had something 42,000 years old, from a temperate environment--not from the freezer, aka permafrost--and we sequenced it," says Ostrom. "Biochemists at Michigan State University and University of Michigan were also surprised."

One reason for this success, says Ostrom, is osteocalcin is protected by the minerals in the bone and, therefore, is remarkably hardy. What's more, she adds, osteocalcin doesn't exist in the bacteria or other small organisms that frequently contaminate fossils. All too often, Ostrom says, a researcher extracts and sequences a protein from a fossil only to discover the protein's source is a modern-day contaminant.

Osteocalcin is a small protein, composed of 46 to 49 single amino acids. The larger the protein, the more likely it is to have changed over evolutionary time--and therefore, the more useful it may be to paleontologists. But since the techniques used to isolate and sequence proteins from fossils are so new, Ostrom says it's wise to start small.

"The flip side is that the protein doesn't have as much information because it only has 46 to 49 [amino acids]," says Ostrom, adding "but think of it this way: If no one had invented an airplane or a helicopter, and somebody wanted to fly to the moon, would you fund them to go to the moon? No. First steps first."

This particular first step is exciting to researchers because, like DNA, proteins hold coded information about an organism's ancestry, and its relatedness to other organisms--both living and extinct. Because DNA sequences are essentially scripts for proteins, proteins can be "read" in reverse to obtain DNA sequences.

"Going after proteins is cool because they are the expression of the genome, aren't they?" Ostrom says. "We're a long way from being able to assign functionality to ancient proteins--that might be something one thinks of a hundred years from now--but there's a lot to be learned now."

In addition to identifying individual fossils and understanding phylogenies, Ostrom and her colleagues at University of Michigan and York University are studying how proteins break down over time. Understanding these chemical reactions is essential for understanding what factors limit a protein's ability to survive over time. Ultimately, researchers wish to go back in evolutionary time to study what an organism's life was like. In some cases, a look at the protein makeup of fossilized bones can reveal the habits of the individual that left them behind--its eating habits, for example, or its age at death.

A 42,000-year-old horse unearthed in Wyoming may not be as exciting to some as a T-Rex, Ostrom concedes, but she intends to use the same tools to peer increasingly deeper into the past. "I'm working on fossils in the million-year-old range right now," she says.