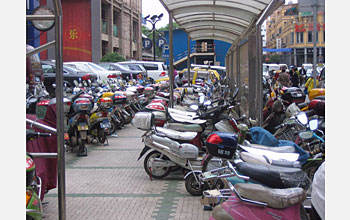 This scene from a parking lot in China drives home the growing popularity of e-bikes.

Grace Zhang is like many other Chinese women. She is a middle-aged business owner, mother of a young daughter and one of more than 40 million new users of the electric bike, or e-bike, in China. Zhang is among China's emerging and rapidly motorizing middle class, riding China's economic growth. She leads a busy life between operating an English school, transporting her child and shopping; her day is full of activity. Her daily activities require high levels of flexibility and mobility, needs met by her new e-bike.

Electric bikes range in style from traditional pedal bicycles powered by an electric motor to larger electric-powered scooters. They are loosely restricted on speed and size, but given the same rights as bicycle users, operate in bicycle lanes and do not require driver's licenses, vehicle registration or helmet use.

Proponents would suggest that the e-bike phenomenon is a positive development; after all, e-bikes are quiet, non-polluting and provide more mobility than any other mode of transportation.

Opponents, however, charge that e-bikes are unsafe, increase congestion and indirectly pollute the environment through increased power plant emissions and lead pollution from the vehicles' heavy batteries. Several cities have attempted to, or successfully, banned electric bikes from roadways, including the mega-cities of Beijing and Guangzhou.

Still, there has been little research on the true impacts of electric bikes in China.

As a doctoral student in civil and environmental engineering at the University of California, Berkeley, I began conducting research, which led to a dissertation, on quantifying the impacts of electric bikes in China. I participated in the National Science Foundation's inaugural East Asia and Pacific Summer Institute (EAPSI) in China during the summer of 2005, and with support from the Volvo Foundation, I used this experience to examine several of the contentious issues surrounding electric bikes, including their seemingly negative impacts on the environment and safety, countered by their mobility benefits that allow access to jobs, shopping and health care opportunities.

Chinese cities are expanding and becoming more congested as new personal automobiles fill the scarce roadway capacity. With a long legacy of bicycle use, Chinese commuters are accustomed to personal mobility and short trips. Trips are getting too long for bicycles and public transit services are often incapable of serving populations in cities with disorganized urban development patterns while competing with cars for road space.

Electric bikes have filled the niche, providing high levels of personal mobility at a fraction of the cost of a car or even public transit.

I found that electric bikes travel about 35 percent faster than bicycles and have a much larger range. In the city of Kunming, an electric bike can provide access to 60 percent more jobs within 20 minutes than a traditional bicycle. Compared to a 30-40 minute bus ride, an electric bike rider can access three to six times the number of jobs.

While this increase in mobility is remarkable, this mobility does come at a cost--namely increased lead pollution from battery use.

Electric bikes use one car-sized lead acid battery per year. Each battery represents 30-40 percent of its lead content emitted to the environment in the production processes, resulting in about 3 kilograms of lead emitted per battery produced. When scaled up the 40 million electric bikes currently on the roads, this is an astonishing amount of lead emitted into the environment.

This negative environmental impact is countered by other environmental benefits compared to most modes, including vastly reduced energy use and greenhouse gas emissions.

Ultimately, the success or failure of electric bikes as a sustainable mode of transportation should be evaluated in the context of the extent to which they displace automobiles. The e-bikes certainly have fewer negative impacts than personal automobiles, but currently displace mostly bus and bicycle users and only a small number of car users.

As China motorizes, will electric bikes displace would-be car users or simply provide a stepping stone to full blown auto ownership? They will likely lead to both outcomes. To the extent that electric bike battery technology and production processes improve, electric bikes provide some of the highest mobility and access to an urban area with some of the lowest negative impacts to the transportation system or the environment.

-- Christopher Cherry, (865) 974-7710 cherry@utk.edu, Assistant Professor of Civil and Environmental Engineering at the University of Tennessee-Knoxville