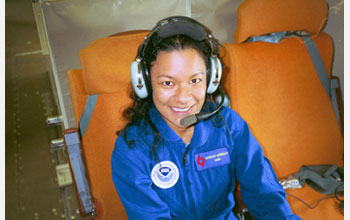 Shirley Murillo is a research meteorologist at the National Oceanic and Atmospheric Administration's (NOAA) Hurricane Research Division in Miami, Fla., and she is an expert on the behavior of hurricanes when they reach landfall. Murillo specializes in examining how hurricane wind fields change as they approach land, and as part of her job, she gets to fly directly into the storms she studies.

She credits internships in the National Science Foundation-supported Significant Opportunities in Atmospheric Research and Science (SOARS) program as important early research experiences. In this interview with SOARS program associate Annaliese Calhoun, Murillo discusses what it's like to fly into the eye of a Category 5 hurricane, and how she first became interested in researching weather.

What is flying into the eye of a hurricane like?

It's a once in a lifetime experience! We fly aboard NOAA WP-3D four engine turbo prop research planes. Flying into a hurricane can be turbulent at times. You feel like you're on a roller-coaster--for 10 hours. I have flown in a variety of storms, from tropical storms that have winds speeds in the range of 34-63 knots (39-73 mph) to powerful category 5 hurricanes with winds speeds that exceed 136 knots (156 mph)!

A lot of people have the misconception that we fly above the storms, but we actually fly into the thick of it, about 10,000-12,000 feet above sea level.

The most turbulence is experienced in the eyewall. The eyewall is a ring or band of strong, deep, convective clouds that surrounds the eye (the center) of a hurricane. The highest wind speeds are found in the eyewall. Once you go through the eyewall to the eye--the storm's center--it can be fairly calm. It's an amazing sight to see; it's almost like being in the center of a football stadium where the seats surrounding you are made out of clouds. At the same time, you look above (and) you can see the bluest color of sky, and if you look below, you see the ocean roiling with huge waves crashing.

While I've flown into numerous storms, usually a few each year, I always have a sense of excitement and curiosity about how the storm is changing and evolving while we're in there collecting data.

Why do you fly into hurricanes when radars and satellites already give us images of the storm?

There's nothing that can replace the type of data that we gather straight from the storm!

During our 8-hour-long flights, we have several flight patterns that we follow to collect various data sets. We're also dropping an instrument called the GPS Dropwindsonde throughout the storm, and even in the eye. This instrument essentially gives us a 3-D vertical profile of the storm, including its temperature, wind speed, wind direction, humidity, pressure and location every half second. The data is transmitted instantaneously from the GPS Dropwindsonde to the aircraft where I process the data and quality control it.

This information shows us what's going on inside the storm, and how it's changing or intensifying. The data is transmitted via satellite to the National Hurricane Center and other NOAA agencies that use the data in their computer forecast models to improve track and intensity predictions for the hurricanes.

The data that we collect during these flights often plays a critical role in helping hurricane forecasters to produce accurate and timely warnings. These warnings can save lives and reduce property losses.

The data we've gathered has certainly improved our understanding of the structure of storms. Over the course of a single flight, we can see how quickly the storm evolves in a matter of hours. As we fly back and forth through the eye we can track the pressure dropping and the storm intensifying. You may think you know what the storm is doing but when you sample it, you discover it's a whole different animal.

How did you first become interested in hurricanes and meteorology?

It all began with hurricane Andrew in 1992. It was the first storm I ever experienced firsthand. I was young and I tracked the storm from my home in Florida.

Fortunately, my family and I didn't experience the strongest winds and rain, so there was not much damage afterwards. Once the electricity came back on and we watched the news, I was really struck by all the images of destruction in southern Florida caused by the category 5 storm. I was intrigued by the strength and power that nature can hold.

You've come a long way since your initial experience with hurricane Andrew. How did you go from observing a hurricane's destruction to flying into its very center?

When I was in high school, I decided that I wanted to be a meteorologist and got an internship at the Hurricane Research Division of NOAA's Atlantic Oceanographic Meteorological Laboratory in Miami, Fla. I thought that since I was a high school student, the scientists would give me busy-work, but they didn't. They gave me actual data that had been collected in a storm, and when I finished my project, they asked for my opinion and conclusions on what the data meant. They even used my findings for some of their research! It struck a chord with me that they valued my work, and since I enjoyed the research atmosphere and community so much, I knew I wanted to pursue a career in this field.

My three summers as an intern with SOARS program at the National Center for Atmospheric Research (NCAR) further solidified this desire. Through SOARS, I had multiple mentors as I conducted my science research, and there was a real sense of community with scientists and fellow interns; in science, you don't work by yourself, you collaborate. In fact, nearly ten years later, I still collaborate with my SOARS science research mentor, Wen-Chau Lee, and we write scientific papers together. It was also during my summer projects at NCAR that I first began working with radars, which is a now becoming a major part of my job.