Supercapacitors Could Be Key to a Green Energy Future 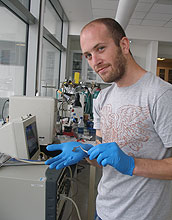 Everything is "green" these days. From buying green to living green, the term has become short-hand for environmentally friendly. Concern for the environment is one thing that's fueling interest in alternative sources of energy. The staggering increases in the cost of oil and everything that depends on oil are other factors.

John Chmiola may have found a way for us to power our devices and still live green. Chmiola is a doctoral student at Drexel University and his advisor is Yury Gogotsi, chair of the university's A.J. Drexel Nanotechnology Institute. Chmiola's groundbreaking work is on high efficiency energy storage devices known as supercapacitors.  "Now that gas costs $4.25, I'd like to think that my work is essential," Chmiola says.

These days, more people may be thinking about buying a hybrid car. If so, remember this word: supercapacitors. Some researchers believe that these energy storage devices will be the best alternative to gas-fueled automobiles. Possible uses extend beyond cars. Supercapacitors have attracted researchers' attention for use in "many applications where batteries are being misused," Chmiola notes.

What's this greener energy alternative all about?

Supercapacitors--most commonly used in backup power applications because of their infinite lifespan--are electronic devices that have an unusually high energy density when compared to common capacitors.

"Unlike batteries and fuel cells that harvest energy stored in chemical bonds, supercapacitors exploit the electrostatic separation between electrolyte ions (an atom or group of atoms with a net electric charge) and high surface area electrodes, typically carbon," Chmiola explains.

Electrochemical capacitors, ultracapacitors, electrical double layer capacitors "were immediately fascinating to me because of their apparent simplicity and properties complimentary to batteries," he notes.

When Chmiola first started research on supercapacitors, work was already ongoing on carbide-derived carbon (CDC), an alternative to the base activated carbons of most electrochemical capacitors. Prior research by Gogotsi and others on the CDC structure gave Chmiola the "confidence to precisely tailor the carbon properties, on a level not easily achievable, using traditional porous carbon synthesis techniques," Chmiola explains.

Historically, the design framework for supercapacitor carbon experiments was to produce carbon with the largest pore size possible. But, contrary to researchers' popular belief that large pores in supercapacitor carbons were superior in functionality, Chmiola "was surprised to find out that pores smaller than one nanometer seemed to have better performance than larger pores. Utilizing this approach produced lighter and more powerful supercapacitor devices," Chmiola says.

But, it wasn't just the size. It was also about the right size. The team of researchers found that the pore size needed to match the ion "precisely," Chmiola emphasizes. By further doing this, a 50-percent improvement in performance was achieved.

Chmiola, whose work on supercapacitors was funded through the National Science Foundation's (NSF) Integrative Graduate Education and Research Traineeship (IGERT) program, started the research that led to his discovery in his senior year of undergraduate study. He also is a recipient of the Graduate Research Fellowship (GRFP).

Nanotechnology is the art of manipulating matter at the atomic or molecular scale. It takes about 3-10 atoms to reach the length of a nanometer. In comparison, the diameter of a human hair is about 20,000 nanometers wide.

Chmiola's objective was to find the optimal pore size for supercapacitor performance, while minimizing the effects of constricting the ions to small pores. The combined knowledge of Gogotsi on carbide-derived carbon (CDC) structures and Chmiola's on electrochemistry led to the steps to develop the electrochemical capacitors experiment. This turned from a one-year undergraduate project into Chmiola's doctorate thesis project. An international collaboration with the group of professor Patrice Simon of the Université Paul Sabatier in France was the needed catalyst "to make the synergy complete," Chmiola says.

Chmiola's discovery was featured in the Aug. 18, 2006, edition of the journal Science. Furthermore, reports about his work have appeared in the journal Nature and other print and online international publications.

How important are supercapacitors to our everyday lives?

Supercapacitors are valued for their infinite energy lifespan. Traditional power sources and batteries, essential to our personal electronic devices and automobiles, don't store that much energy. Due to their high storage energy capacity, supercapacitors are finding increased usage in portable electronic devices like MP3 players, mobile phones and palm pilots. Other benefits, like short charging times and high performance in low temperatures, could lead to new applications.

Supercapacitors, as an energy efficient alternative, have limitations in both cost and performance. "Obviously all the pieces are not in place yet to put electrochemical capacitors (EC) in every future automobile," Chmiola asserts, "but helping to advance the understanding and develop the knowledge base necessary to make this revolution happen is what keeps me going."

His team has some out-of-the-box ideas to make supercapacitors better, and results are promising, "but it's a bit too early for publication," Chmiola adds.