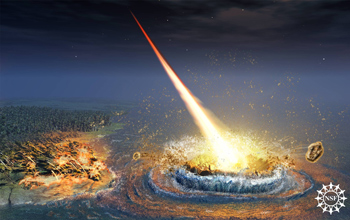 A crater from a long-ago comet impact in the Chesapeake Bay lies under many feet of sediments.

Few summer boaters on the Chesapeake Bay know that a several-miles-wide maw lies directly beneath them.

The scientists discovered surprising news: the crater's crumbling walls have led to a bloom of microorganisms in a place no one expected to find life. The disintegrating perimeter, however, also may allow salt water to intrude into regional water supplies. The findings were released in the June 27, 2008, issue of the journal Science.

Eons ago, a comet or asteroid slammed into the Chesapeake area. The bull's-eye for this ancient crash was directly over today's community of Cape Charles, Va.

"The Chesapeake Bay Impact Structure is among the largest and best preserved impact craters on Earth," said Leonard Johnson, NSF program director for continental dynamics. "The goal of the project was to drill a deep hole near the center of the crater. This successful mission resulted in discoveries no one could have foreseen."

The comet or asteroid vaporized on impact, scientists found, spewing mud and sand grains for miles. When the dust settled, the resulting crater was 12 miles wide and 4 miles deep. "The comet left behind an unusually large impact for something we think was only 1.3 miles wide," said geologist Greg Gohn of the U.S. Geological Survey, one of the lead scientists on the project.

With the Chesapeake's soft mud sediments, however, the crater walls weren't strong enough to support such a massive pit, said Gohn. "The walls began to fall in on themselves, trapping the salt water within the collapsing mass of rocks and sediments."

Gohn, Ken Miller of Rutgers University and colleagues recently completed three months of round-the-clock drilling into the crater. The scientists retrieved rock samples from a mile down in the impact structure.

What they found surprised both geologists and biologists.

"The cave-in of the perimeter stirred up nutrients that eventually allowed microbial life to blossom inside the crater," said Gohn. "This was the first sampling ever conducted of microbes within a crater."

The microbes that reside beneath the Chesapeake Bay may be a hint that life on other planets like Mars could take root the same way.

For human life, however, the finding that the crater's walls had at least partially caved in isn't good news. Salt water that was trapped within the crater now threatens the water supplies of those in the region.

"The water inside the crater is no longer completely fresh," said Miller. "In fact, the water is twice as salty as surrounding seawater."

Many towns and villages in the Chesapeake Bay region rely on underground freshwater aquifers that flow through the crater. Their wells could become "contaminated" with salt water.

In addition to geologists, water managers--and biologists searching for new ways to study extreme environments where life may thrive--are taking a fresh look at the Chesapeake Bay Impact Structure.

For those in the Chesapeake area, including summer boaters, out of sight should not mean out of mind.