How to Make Adhesive as Good as a Gecko 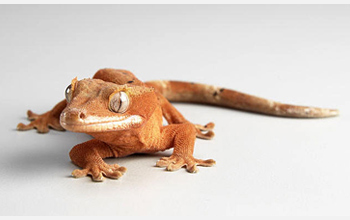 The gecko can scamper across sheer surfaces, even vertical walls.

Materials scientist Ali Dhinojwala came to the U.S. nearly two decades ago to earn a Ph.D., building upon a chemical engineering education in India and leaving behind his own factory and business.

"I grew up in a business family so it was an obvious career choice," he said. "I quickly realized the factory was missing a research component so I came to the United States to acquire that knowledge because graduate training was not as developed in India at that time." And while he still visits his family, as far as his career is concerned, he's never looked back.

In 2002, Dhinojwala first learned about the special toe structure of the gecko lizard when he attended a conference. Now, Dhinojwala and his colleagues are making breakthroughs in the growing field of gecko-inspired engineering.

By the early part of this decade, scientists were already trying to develop a synthetic adhesive inspired by the gecko's foot, and with good reason. Unlike glue and other sticky adhesives, gecko adhesion leaves no residue behind, doesn't degrade over time, and in an odd twist, a gecko's feet are self cleaning (more about that later).

The gecko's ability to adhere to vertical surfaces--even walk upside down on ceilings---is due to the special hierarchical structure of its toes. The toes are covered with microscopic hairs called setae that further split into hundreds of smaller structures called spatulae, each only millionths of a meter across. With its specialized feet, a gecko's traction is so strong, it can hold more than 100 times its weight.

"There is no glue involved," Dhinojwala said. Instead, the traction results from a physical property known as the van der Waals forces, a transient attraction that can occur from atom to atom at the scale of molecules.

When a gecko places its foot on the wall and curls its toes, the tiny spatulae get so close to the nooks and crannies on the wall's surface that their atoms interact with the atoms of the wall, bringing the van der Waals forces into play. To tighten or loosen its grip, the gecko curls and uncurls its toes, repeating the process more than 15 times per second.

A highly magnified photo of the gecko foot structure shown at the 2002 conference reminded Dhinojwala of a photo he'd seen of some carbon nanotube structures that a friend grew in his lab. When Dhinojwala compared the two pictures in his mind, he realized nanotubes might be an ideal material to mimic the footpad of a gymnastically gifted gecko.

Dhinojwala and his team at the University of Akron went to work developing columns of nanotubes that were rooted in flexible polymer pieces. The researchers grew the nanotubes on a glass-like silicon base and then transferred them to a plastic-like polymer to provide the flexibility inherent in a natural gecko foot's soft cushions. The polymer is tacky, so when it dries, it holds the silicon base that holds the nanotubes.

Dhinojwala and his team used the technique to develop an adhesive tape that sticks four times better than a gecko's foot and they are continuing to refine the technology to optimize adhesive strength.

For example, while solid columns or an extended "carpet" of nanotubes yield weaker tapes, the researchers demonstrated that the arrangement of individual nanotubes in distinct columns achieves greatest strength, with "checkerboard" patches proving particularly effective. Such patches can be peeled and used repeatedly without weakening.

The researchers, supported by a grant from the Polymers program of the NSF Division of Materials Research, announced their latest findings in the June 26, 2007, Proceedings of the National Academy of Sciences.

Although the technology is still in its infancy, Dhinojwala sees a number of applications. Current household tapes offer good adhesive properties but their stickiness eventually wears off and the tape comes off. A synthetic gecko tape would provide a permanent attachment. In the military, Dhinojwala sees an obvious place for the technology on the feet of robots that must negotiate rough surfaces or obstacles like walls. Industrial applications could include the field of microelectronics where components on computer boards require soldering to stay together. With synthetic gecko tape, components could be stuck together without heat, which saves energy, and cheaper and lighter plastic materials could replace the metal.

"Once a gecko walks in dirt or dust, it only takes two or three steps for it to regain 50 percent of its sticking ability," Dhinojwala said. "The adhesive materials available today all lose their tackiness once dirt or dust coats the surface. We're trying to understand this characteristic better so we can implement it into the synthetic material."

Related Awards
#0512156 Role of Structure and Dynamics of Molecules at the Interface in Controlling Friction, Adhesion and Adhesion Hysteresis

Related Websites
LiveScience.com: Behind the Scenes: How to Make Adhesive as Good as a Gecko: http://www.livescience.com/2335-adhesive-good-gecko.html
Resume: Professor Ali Dhinojwala: http://www2.uakron.edu/cpspe/dhinojwala/
NSF Press Release: Carbon Nanotubes Made to Stick Like a Gecko's Foot: http://www.nsf.gov/news/news_summ.jsp?cntn_id=104355&org=NSF