Estimating the True Costs Of Invasive Species in the Great Lakes 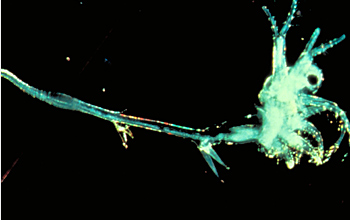 The spiny waterflea (Bythotrephes longimanus) was first discovered in Lake Huron in 1984.

The Great Lakes currently harbor well-established populations of more than 50 non-native species that were dumped into those waters by ocean-going ships.

As a student of ecology, I have long wondered what is the total cost of the introductions of so many species, the impact on the ability of these critical water bodies to support sport and commercial fishing and wildlife viewing.

But when I began to investigate this important question for my doctoral research, I discovered--to my dismay--that no cost estimates were available.

How did I measure the losses? I used a new approach to assess ecological damage called structured expert judgment. This approach synthesizes information from scientists and other experts to estimate the values of variables that, for technical or ethical reasons, cannot be measured directly.

My research eventually found me driving in a pickup truck with an international pioneer in the use of structured expert judgment: Roger Cooke, a research chair at Resources for the Future in Washington, D.C. Roger and I were heading north toward Sault Ste. Marie, Mich., where we interviewed Great Lakes fisheries expert Mark Ebener about what these fisheries would look without ship-borne species.

Our interview with Mark was the first of nine we conducted that month with experts throughout the Great Lakes region--including professors specializing in Great Lakes food webs and the natural resource economics of the region, as well as government fishery biologists.

After the interview, we lunched with Mark, who also happens to be an expert on the best places to eat fish fresh from Lake Superior. At an unassuming diner on the town's outskirts, each of us ordered the whitefish platter (whitefish are native to the Great Lakes).

When the waitress brought our meals, I admired the two huge fillets, nestled in a generous helping of fries, sitting next to a scoop of homemade coleslaw. With the first bite, my admiration grew. Whitefish is mild and delicate; some of the early explorers in the Great Lakes region called lake whitefish the "best fish in the world," saying "one could eat it for days and never grow tired of it." Based on the tastiness of my meal that day, I think they were right.

The whitefish is among the natural treasures of the Great Lakes that have been seriously harmed by non-native zebra and quagga mussels. Why? Because one of the whitefish's favorite foods is Diporeia, a nutritious freshwater shrimp that lives in lake sediments. But since the invasive zebra and quagga mussels were introduced and then began dominating lake-bottom habitats, the Diporeia shrimp have been disappearing.

Forced to eat mussels instead of energy-rich Diporeia shrimp, whitefish have become smaller and less healthy. Thus, their market value has decreased, and the profits of commercial fishermen who harvest them have declined.

After an interview with another expert in Sandusky, Ohio, I sat with my Ph.D. advisor, David Lodge, at a picnic table on a warm evening in early October. Eating a dinner of perch sandwiches, we looked out over Lake Erie, only a stone's throw away.

Yellow perch are delicious, not too fishy, and have a firm, slightly flaky texture that meshed perfectly with the soft freshly baked bun of my sandwich. The combination of the delicious meal, the scenery, and my thoughts and feelings during this simple moment made it among the most memorable of my graduate school experience.

Nevertheless, the fact that non-native species are damaging populations of yellow perch along with other important species of sport and commercial fish in Lake Erie continues to gnaw at me.

I understand that some people may not particularly care about whitefish platters or perch sandwich picnics, or even bird watching at Point Pélée. Nevertheless, in one way or another, everyone in the Great Lakes region benefits from the economic and ecological ecosystem services provided by the natural resources of the Great Lakes.

The results of my interviews with Roger, Mark and many other experts showed that ship-borne invasive species were responsible for more than $200 million in losses to benefits from ecosystem services in 2006.

This figure does not include losses to the Canadian economy, property-value losses in the United States tied to invasive mussel-fueled algae outbreaks, and significant losses to states outside the Great Lakes region, which have been harmed by the spread of zebra and quagga mussels.

I hope that my $200 million estimate of lost benefits will help promote informed decision-making for the control of non-native species already in the Great Lakes, and the prevention of future invasions.

To this end, my research group issued a press release on my estimate last summer, and the story was picked up in many national newspapers. In addition, David Lodge recently gave a talk about our research to an international regulatory body known as The Great Lakes Commission, and we will be presenting this research at the annual meeting of the American Association for the Advancement of Science in Chicago in February 2009.

Please visit this site for my research group's press release and additional information about the impacts of non-native species on the Great Lakes.