Unraveling the Wonders of Spider Silk 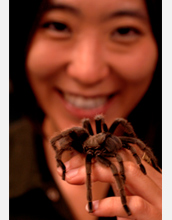 Spiders have fascinated Cheryl Hayashi since her undergraduate days at Yale, where one day a professor offered her an opportunity that changed her life. Hayashi had to hand-feed the professor's laboratory colony of tropical spiders--an assignment that sparked such an interest in arthropods that it led to a career in biology.

Today, Hayashi, a professor of biology at the University of California, Riverside (UCR) and a recipient of a John D. and Catherine T. MacArthur Foundation "genius" grant, returns the Yale professor's favor by mentoring students and postdoctoral researchers in her own lab, where they do extensive genetic characterization and mechanical testing of spider silk fibers.

Comprised of individual protein molecules, spider silk has long fascinated scientists. With the support of the National Science Foundation (NSF) and other institutions, Hayashi's research team collects spider silk strands and painstakingly combs through silk glands, located inside the spiders' abdomens, to find the elusive genetic blueprints for silk making. The goal of the work is to better understand what gives the silk its amazing properties.

"Different proteins are made and mixed in the silk glands of spiders to create the silk," Hayashi says. "It is a combination of the exact sequence of the individual proteins and the way these proteins interact and link with each other that gives silk its remarkable strength. People have tried to mimic its production in the lab--for example, by squeezing these proteins through a narrow syringe--but what they've ended up with was something thick and brittle, not the fine and flexible material that is spider silk."

Nearly all spiders make several kinds of silk to move, trap and store food, and reproduce. Most silks are less than one-tenth the diameter of a human hair, and lighter than cotton, yet ounce for ounce, up to five times tougher than steel. As a result, they are being considered for improving a wide variety of products such as lightweight, super-strong body armor, specialty rope, biodegradable surgical sutures and components of medical devices.

"Whenever you need something strong and lightweight, spider silk can be a good candidate," Hayashi says. "For example, making a thin film or a thin fabric. Or as scaffolds to re-grow tissue. Silk is being seriously explored for use in bullet-proof vests. Down the road, I see silk being used in textiles for high-performance, durable clothing. Spider silk's advantages are its softness and flexibility, qualities you need for making items such as high-tech athletic attire and ultra-tough patches to cover areas around body joints."

Scientists like Hayashi have come up with ingenious ways to increase the production of spider silk. With help from plant genetics engineers at UCR, she has moved silk genes into crop plants like tobacco and tomato. These host plants produce copious amounts of silk that she can extract in her lab for analysis.

"We chose plants as hosts because they are much lower maintenance and easier to cultivate in large numbers than spiders," Hayashi says. "Other silk-producing hosts could be bacteria, yeast or farm animals."

Spider silk has been around for more than 350 million years and has changed radically over time. By combining genetic data with the fossil record, Hayashi and her team can carefully trace the intertwined histories of spiders and their silks.

When Hayashi began working on spider silk more than a decade ago, she expected a system that was intriguing because of its elegant simplicity. Indeed, the first spider silk she characterized fit neatly into her thinking--it was an uncomplicated material, understandable with just five to six core building blocks.

"But as I collected more spider silk data, it became increasingly clear that I was researching a complicated system," Hayashi says.

Over the years, her lab has shown that the remarkable properties of spider silks are created by a combination of the spider's spinning processes and the ancient protein structures handed down genetically over millions of years of evolutionary history. Her lab also uncovered the molecular structure of the genes for a variety of silks, including the protein that female spiders use to make their silken egg cases.

Her research group has been credited with discovering evidence indicating that spiders' wagon-wheel shaped nets are so old that dinosaurs may have seen them. Moreover, her lab determined the complete gene sequences for two key proteins in the "dragline silk" of the black widow spider. More recently, Hayashi expanded her studies to include silks from other arthropods (such as caterpillars) and non-fibrous silk proteins such as glues.

Her research keeps expanding to study more types of silks and more species of spiders. Her lab is also working on characterizing silk proteins that tarantulas produce in their feet.

Besides making discoveries, communicating science keeps Hayashi going. She enjoys speaking to the public about her research and emphasizes to young students, senior citizens and business groups the importance of observing nature in detail.

"It's only by closely studying how spiders make their silk that you appreciate how complicated and extraordinary the process is," she says. "You can't help but wonder how the liquid goo of proteins is dehydrated in the spider and then made to flow out as a dry, flexible fiber. Thousands and thousands of individual molecules bind together in a way that produces a continuous fiber, and, most remarkably, all this happens nearly instantaneously."

Such fascination with nature's intricate workings drew Hayashi to science and made her a national expert on the genetic structure of spider silk.

"I'm always learning something new from spiders," she admits. "Whatever I discover about them today leads to more questions tomorrow. In this young field, where so much is unknown, a new piece of information leads you unexpectedly to a completely new area of spider research. The spiders have a way of keeping my research going."