Respect for Sacred Values is Key to Conflict Resolution 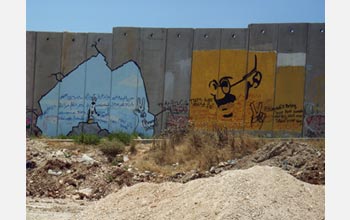 A drawing of Mahatma Gandhi on the wall separating the West Bank from Israel.

A team of researchers funded by the National Science Foundation is investigating the role of ethical and religious beliefs, or "sacred values," in motivating human behavior. The team's most significant finding is that individuals who hold sacred values are rarely willing to barter them for economic gain.

"It's easy to assume that all players approach the world with similar sets of rational choices but ignoring or disregarding the sacred value frameworks across cultures may exacerbate conflict, with grievous loss of national treasure and lives," said Scott Atran, visiting professor of psychology and public policy at the University of Michigan Ann Arbor.

Atran is also a presidential scholar at John Jay University and holds a tenured position as director of research in anthropology for the National Center of Scientific Research in Paris. The Michigan-led research team included members from Northwestern University, the New School, Harvard University and the John Jay College of Criminal Justice.

The team's research results suggest the "rational actor" theory that has dominated strategic thinking since the end of World War II is often of limited value in today's increasingly global world. The theory assumes adversaries model the world on the basis of rational choices that are similar across cultures. Most transnational organizations, such as the World Bank, NGOs and U.S. military and diplomatic services, still set policy based on the assumption of rational actors.

The Michigan research on sacred values demonstrates some limitations of the "rational actor" framework and could transform the way the U.S. handles some geopolitical issues because it provides scientific evidence for the role sacred values often play in decision making and in resolving conflict," said NSF Program Officer Robert O'Connor.

The researchers combined experiments, surveys and interviews of students, refugees, settlers and leaders involved in the Israeli-Palestinian conflict. They asked participants to respond to a series of proposed solutions involving compromises while measuring their emotional response and their propensity for violence. They found that most of the participants responded negatively if the proposed solution was an economic trade-off of some sort, responded extremely negatively if offered a trade-off along with some substantial material incentive, and responded more positively to a trade-off that also involved a symbolic concession.

"Our research tells us when there is a confrontation involving sacred values, then offers to give up or exchange sacred values for material incentives is taken as a deep insult, which only increases disgust and the moral outrage that inspires violence," Atran said.

The researchers' findings appear to hold true for groups outside of the Middle East. Scientists at Northwestern University and the New School recently replicated the study's findings for a conflict involving Hindus and Muslims in India and also Madrassah students in Indonesia.

The research results also appear relevant for sacred values not necessarily tied to an organized religion. In the U.S., many European-American hunters have sacred values concerning gun control while at least one group of Native American hunters did not. The Native Americans, in turn, had sacred values on issues of eminent domain and sovereignty. In another study, the researchers found that Amish and Evangelicals hold similar sacred values but only Evangelicals translate them into political action, and only for a subset of issues. A key finding of all the studies is that sacred values do not correspond to a generalized tendency towards extremism or some set of personality traits, Atran noted.

Their work today suggests government leaders should discard the rational actors' theory in favor of the "devoted actors" when negotiating with groups such as suicide terrorists that live within a rigid framework of sacred values because they are willing to make extreme sacrifices with little or no guarantee their actions will result in success, material or otherwise.

"The utilitarian position of the U.S. may play into the hands of terrorists who turn it around to show that America and its allies try to reduce people to material matter rather than moral beings," Atran said. "A more productive strategy may be to allow moral alternatives that provide non-violent pathways of expression, even if they do not match our own moral values."