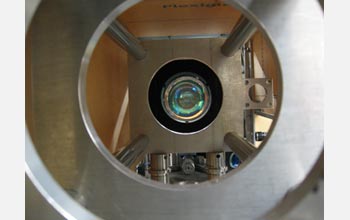 Since Richard Feynman first proposed the idea of a quantum computer in 1982, scientists have dreamed of harnessing the quirky power of quantum mechanics to solve impossibly difficult computation problems. The hope is that someday these "computers on steroids" will be able to simulate the intricate atomic-level behavior of exotic materials, or crack the secret encryption codes that shelter clandestine Internet transactions.

Now one group of researchers, funded by the National Science Foundation, has added an important piece to the puzzle, bringing quantum computing a step closer to reality.

Reporting in the February 2009, issue of the journal Nature Physics, the scientists showed they could use a single atom to control another atom. With their new technique, they hope to create working logic devices, similar to transistors in an electronic circuit, which could eventually be used in a quantum computer.

"Many research groups have been working to build a quantum computer using a variety of approaches," said Mark Saffman, professor of physics at the University of Wisconsin-Madison and principle investigator for the project. "A theoretical proposal published in Physical Review Letters in 2000, suggested using Rydberg blockade for quantum logic gates. We decided to turn that proposal into an experiment."

The Rydberg blockade principle was named for Johannes Rydberg, a Swedish mathematician and physicist in the late 1800s. He developed a formula that predicted the wavelengths of energy emitted when an atom changes energy levels. Later, Niels Bohr based his Nobel Prize-winning atomic model theory in part on Rydberg's formula.

Even though Bohr's model had flaws, it was absorbed into the original quantum theory, named for the Latin term "quantum." Quantum theory tells us that energy actually exists in very small, discrete packets, each of which is called an individual "quantum" of energy.

Quantum theory later became the theory of quantum mechanics, which explains more accurately how the world works on the scale of atoms, electrons and other subatomic particles. Objects this small behave much differently than do objects in our everyday world, often in ways that go against intuition.

To understand the concept of spin, hold your fist out, fingers curled and thumb extended. Think of your fist as an electron spinning on its own axis. The direction of your fingers is the direction of spin, which changes depending on whether your thumb points up or down. According to the "rules" of quantum mechanics, if two electrons are in an entangled spin state, and one of the pair has an "up" spin, the other must have a "down" spin.

Entanglement--and another elusive concept called quantum superposition--explain why quantum computers should be capable of processing so much more information than the most powerful digital computer.

Today's digital computers store and manipulate information using a system of bits, which can have a value of either 0 or 1 (off or on). But quantum bits (called qubits) can be 0 or 1, or both 0 and 1 at the same time. This "superposition" of qubits should make it possible to process several bits of information at once, resulting in a much faster, more efficient computer.

The Gates of Logic

Most of us learned to use logic gates in 8th grade algebra. For example, an AND gate means that both of two digital inputs must be equal to 1 for a signal to pass through. If either one or both of the inputs are 0, the result, or output, will also be 0. A NOT gate takes a single input and "inverts" it, so that an input of 0 would be converted to a 1 or vice versa.

In their quest for a way to build a CNOT gate that would work with qubits, Saffman and his colleague Thad Walker chose neutral atoms of rubidium, a highly reactive alkali metal similar to sodium. Using a method called "optical tweezers," a pair of tightly focused laser beams cooled and trapped the atoms 10 micrometers apart--about one-fifth the width of a human hair.

In quantum mechanics, the lowest energy state of an atom is its ground state. Sometimes atoms may have more than one stable ground state. "In our approach, we trapped two different electronic hyperfine ground states of rubidium atoms to use as qubits," Saffman said.

Once they had two rubidium atoms trapped in their ground states, the researchers hit them with pulses from a laser beam. The energy from the lasers "transitioned" electrons in the atoms to high energy states.

Atoms that have electrons in highly excited states are known as Rydberg atoms. According to quantum mechanical theory, electrons in a Rydberg atom are so energized that they can interact with each other over a long distance--in this case 10 micrometers, or about one-tenth the diameter of a human hair.

Only one at a time

"When two nearby Rydberg atoms get close enough, they affect each other," said Saffman. "This strong interaction changes their energy levels, preventing more than one atom at a time from being in a Rydberg state. So if one atom gets there first, no other atoms can join it." This effect is called Rydberg blockade.

"We have demonstrated that one Rydberg atom can indeed block the excitation of a second Rydberg atom," Saffman said. "This is the central element of a two-atom CNOT quantum logic gate.

According to Saffman, it took six years to learn to control and detect single atoms, build extremely stable lasers and optical systems, and get everything working together to prove their concept. "We were able to make a detailed comparison and show that the experiment worked just as theory predicted it should," he said.

The researchers' next step will be to demonstrate an actual CNOT gate using the Rydberg blockade principle, and then scale up the system to work with a larger number of qubits.

"Scaling the system is not straightforward and will involve new ideas (some of which we have already been working on) and some new experimental techniques," Saffman said.

"The long-term goals are to create and study the properties of quantum mechanical entangled states of many qubits," he said. "These states may be used for simulating other quantum systems and for quantum computing tasks such as factoring and search."