More and More Scientists Serve Up Science for Mass Consumption

Scientists use innovative, barrier-busting methods to educate the public and decision-makers about cutting-edge science 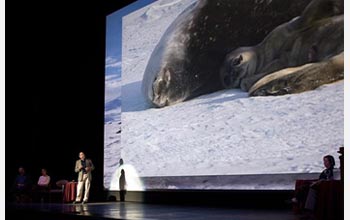 Randy Davis of the University of Texas discusses his research on Weddell seals at Polar Paloooza.

But now, many scientists are rejecting the stigma that has traditionally been associated with popularizing science and are taking science to the streets ... the Internet ... the airwaves ... the halls of Congress ... schools ... and other venues for educating students, the public and decision-makers about their research.

Various factors are currently driving the growing appeal of public outreach among scientists, including:

A recent Science article quoted Peter Agre, President of the American Association for the Advancement of Science (AAAS) as stating, "[I]t seems to me that every tenured faculty in America owes something, and my idea would be tithing 10% of your time for the public good ... I think being part of the public debate is very important--and that's where we're overdue."

In response to these factors, various scientific organizations are currently promoting public outreach by:

In addition, the Aldo Leopold Leadership Program annually trains 20 academic environmental scientists how to communicate effectively with the public and policy-makers. This training includes working with members of the media to improve their interviewing skills, participating in mock Congressional hearings and interacting with policy makers in Washington, D.C. Click here for more information.

A case in point: ESA's 2008 annual meeting featured a symposium entitled "Linking Scientists with Non-Traditional Public Audiences to Enhance Ecological Thought," which was organized by Nalini Nadkarni of Evergreen State College. Nadkarni says that her symposium--which included presentations on ecological outreach targeting prisoners, artists, preachers, non-literate African animal trackers and others--would probably not have been given a place at a scientific meeting even five years ago.

Nevertheless, Lymn says that because of the popularity of ESA's outreach sessions, "they are here to stay.  Even our evening sessions on public outreach are very well-attended."