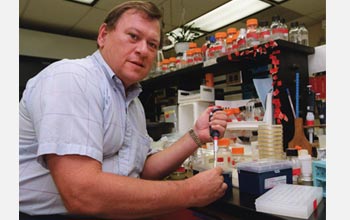 In the poorest nations of the tropics and subtropics--areas that are home to nearly half of the human population--rising temperatures from global climate change promise to devastate staple crops, such as rice and maize, by the end of the century.

"There is a chance that we might be able to stem the effects on plant yield from this climate change," said L. Curtis Hannah, a plant molecular biology researcher at the University of Florida. "But a betting man knows that our best chance is to learn to adapt--to develop crops that will feed people in a hotter climate."

Of course, food production isn't the only part of the problem. Fuel ethanol derived from corn is becoming an ever larger component of an international effort to find fossil fuel alternatives. If corn yields drop from rising global temperatures, the cost of this staple food could skyrocket even more than it already has, while an increasingly significant alternative to fossil fuels disappears.

Certain gene variants code for enzymes called AGPases, which control how much starch a plant stores within seeds that people can harvest for food. The AGPases can be undercut by heat stress, resulting in plants that produce dramatically lower nutritional yields.

Field tests conducted in Florida showed that the Sh2 variant increased the yield of commercially produced corn by 42 percent. This is a dramatic increase, especially given that traditional breeding programs typically only produce a one percent increase in yield per year.

The mechanism behind these increases, however, is still somewhat of a mystery. For example, the plants produce more seeds, rather than larger seeds packed with more starch.

Data from the Hannah group show that only half of the ovaries on maize ears eventually become viable kernels. So, the gene variants are simply blocking some mechanism that would normally abort some seeds before they can develop.

However, there is still a possibility that there is another effect somewhere within the plant's growth cycle. The gene variants are strongest when they are derived maternally, not when they are introduced via pollination. Also, not all kernels on the higher-yield plants carried the gene variant, so the reason for the increase is likely found somewhere within the plant's mechanism for channeling resources to the seeds, rather than in the seeds themselves.

"Man has been growing these crops for thousands of years, but we've only had the tools to try to understand what really makes them grow for a relatively short amount of time," Hannah said. "There's a long way to go before we have a truly comprehensive picture of why they do what they do."

As part of ongoing research funded by the National Science Foundation (NSF) and the U.S. Department of Agriculture (USDA), Hannah is now investigating an AGPase potato/maize gene variant that, thus far, has produced a greater than three-fold output in corn.

"We're going to keep looking at different combinations that will give us better and better yields," Hannah said. "Meanwhile, by watching what happens when we make these changes, we learn more and more about what makes these plants tick."

This type of research is essential to counteracting a future where climate change may lead to as much as a 40 percent reduction in crop yield in tropical and subtropical areas by the end of the century, said Rosamond Naylor, director of Food Security and the Environment at Stanford University.

Naylor recently coauthored a study published in January in the journal Science predicting the toll from greenhouse heat stress.

"Some people are really concerned about genetically modified crops, but the truth is that the climate is changing faster than plants can adapt," she said. "If our technology helped lead us into this, why can't it help lead us out?"