Some Trees and Insects Are Made for Each Other

Christopher Irwin Smith describes research on Joshua trees, yucca moths and the question of whether coevolution between plants and their insect pollinators produced the spectacular diversity of plants and insects 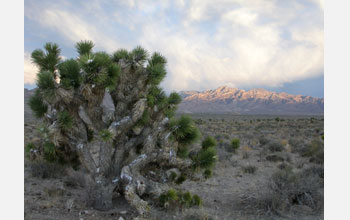 Coevolution--mutual adaptation of two or more species to one another--shapes much of the natural world and produces some of the most remarkable biological phenomena, from the exceptional speed of cheetahs and gazelles, to the virulence of the HIV and swine flu viruses.

The interaction between plants and insects is another prime example. These range from pollination relationships where both species benefit to insect outbreaks that kill entire forests. Plants and insects are also amazingly diverse, with more than 300,000 described species of insects and at least 200,000 species of flowering plants. Many scientists, starting with Charles Darwin, have suggested that coevolution might be responsible for the enormous diversity of these two groups of organisms. However, why mutual adaptation would lead to species diversity is not clear. New research is shedding light on this century-old question.

"The most repulsive tree"

Joshua trees are probably some of the strangest plants in the world. Relatives of agaves, they look like an aloe on steroids, with short, spiny leaves, and long spindly branches that form twisted candelabra.

Their bizarre appearance inspires the imagination of anyone who sees them. Early American explorer John C. Fremont described them as, "The most repulsive tree in the Vegetable Kingdom." Mormon settlers saw in their silhouette the figure of the prophet Joshua. More recent visitors to Joshua Tree National Park have called Joshua trees, "The Dr. Seuss Tree."

"The most remarkable fertilization system"

The strangest thing about Joshua trees may be the way that they are pollinated. These desert plants produce no nectar. So, in order to reproduce, the Joshua tree relies on small, inconspicuous grey moths. The moths have tentacle-like appendages that grow out of their jaws, which they use to collect pollen from Joshua tree flowers. The moths then crawl from flower to flower, deliberately spreading pollen onto the female part of each flower.

Why would a simple moth go to so much trouble to help a tree? The answer is that the moth needs the Joshua tree for her own reproduction. Before she pollinates each flower, the moth lays her eggs on the immature seeds of the Joshua tree, cutting into the flower with a thin, blade-like organ called an ovipositor. Her eggs will eventually hatch into caterpillars that will eat some of the seeds before crawling to the ground to form a cocoon. So, for her babies to eat, the moth needs to ensure that there will be Joshua tree seeds, and for there to be seeds, the moth must pollinate the flower.

Needless to say, the relationship between the Joshua tree and its pollinators is fascinating. In fact, Charles Darwin considered it "the most remarkable fertilization system ever described."

Seven years in the desert

In 2003, much of what we thought we knew about Joshua trees and their pollination changed. That year, biologist Olle Pellmyr of the University of Idaho discovered that Joshua trees were actually pollinated by two similar-looking-but-genetically-distinct species of moth.

Olle, his graduate students and I have spent the last seven springs living in the Mojave Desert seeking to understand how this difference affects the relationship between the Joshua tree and its pollinators. The results show that coevolution between plants and insects may indeed be the reason both groups are so startlingly diverse.

One of the first discoveries that we made was that the two moth species occur in different parts of the desert. The slightly larger of the two species exists in California and central Nevada. The second, smaller species is distributed throughout southern Nevada and Arizona.

Second, it seems that the trees pollinated by each moth species are not exactly the same. When we looked at the flowers of different trees, we found the covering that protects the immature seeds was much thicker on plants that were pollinated by the larger moth.

Finally, we noticed that the ovipositors--the organ that they use to lay their eggs on the seeds--of the two moth species matched the thickness of the wall surrounding the seeds. Each moth has an ovipositor that is just the right length to reach the seeds of the flower it pollinates, almost as if the moth and the tree were made for each other.

This view of life

The implications of these findings were tantalizing. First, the match between the Joshua tree flowers and the moths' ovipositors suggested that coevolution might have molded the relationship between the plant and the pollinator. Second, because the plants are completely dependent on the moths for reproduction, the differences in the flowers might have caused Joshua trees to split into two different species.

This might provide an explanation for how interactions between species have generated the diversity of plants and insects. I am working to further test that hypothesis by measuring natural selection acting on the moths and the trees.

Though the two moth species occur mostly in different parts of the desert, they live side-by-side in a small stretch of desert in Nevada. At that site, both moths visit trees with both flower types, but when moths lay eggs on a tree that is normally pollinated by the other species, the moths produce fewer caterpillars. That is, moths that lay eggs on the 'wrong' tree have lower fitness.

I'm currently conducting experiments that will address why this happens, and whether the trees also pay a cost when pollinated by the wrong species of moth.

The most exciting part of this research is the prospect that a single natural process--natural selection--has produced both the spectacular diversity of plants and insects and the remarkable fit between insects and the flowers they pollinate.

Related Websites
LiveScience.com: Some Trees and Insects Are Made for Each Other: http://www.livescience.com/environment/091113-bts-joshua-tree-coevoluation.html