The First Women in Antarctica

Forty years ago, a pioneering research team from Ohio State made history as the first U.S. women in Antarctica 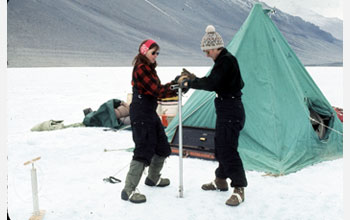 In the spring of 1969, Terry Tickhill Terrell was 19 and an undergraduate chemistry major at Ohio State University, bored with her lab work and restless. She had never traveled more than 250 miles from the Barnesville, Ohio, farm where she grew up.

One day, after reading an article in the school newspaper about a graduate student who had just returned from Antarctica, Terrell decided that that was where she wanted to go.

"I couldn't understand why all this awful lab work was important," Terrell said. "So I walked into the Polar Studies office and said: 'I want a job in Antarctica.' The room fell dead silent. The secretary took pity on me and said: 'There's a group of women going this year. Dr. Lois Jones is in her office right now, and I'll call her."'

The secretary was referring to geochemist Lois Jones, the leader of the four-woman Ohio State team scheduled to leave in October for four months in Antarctica. Terrell wanted to be a part of it.

"Dr. Jones said, 'We have everyone we need, but tell me about yourself,"' Terrell recalled. "I said, 'I'm a chemistry major. I grew up on a farm. I am a hard worker.' She asked if I'd done any camping. I said, 'I'm an outdoor person, and took outdoor cookery at 4H.' The next day she called me up and said: 'One of the ladies is unable to go. I need a cook and field assistant."'

In addition to Terrell and Jones--who passed away in 2000--the team also included Kay Lindsay and geologist Eileen McSaveney. McSaveney, the other surviving member of the group, had graduated from the University of Buffalo and came to Ohio State for graduate work in landscape changes and glacial geology.

"One day, Lois asked me if I would be interested in going to Antarctica as one of her field assistants," McSaveney said. "I said yes without any hesitation--many fellow geology grad students were involved in polar work. Also, my fiancé, Mauri, had already been to Antarctica that year. Going to the Antarctic didn't seem an unusual thing to do."

At the time, neither woman thought much about the fact that their forthcoming journey would mark the triumphant end to a decade-long struggle. Until then, no one could convince the U.S. Navy to rescind its long-standing policy against transporting women onto the Antarctic continent.

The Navy, which had established McMurdo Station, the main American base in Antarctica, as a military outpost in 1956, had been adamant in its refusal to allow women there. Moreover, the National Science Foundation (NSF), which funded the program, did not challenge the Navy's position.

"The U.S. Navy was in charge of field operations and they regarded Antarctica as a male-only bastion," McSaveney said. "Eventually they agreed to allow women to go, but specified an all-female field team."

Now, as we celebrate the 40th anniversary of that pioneering expedition, about a third of Antarctic scientists are women. Hundreds of women have worked in the program, some of them leading research stations and heading major expeditions. More than 50 are working at the South Pole during the 2009-2010 summer season.

Yet in 1969, the pole was unexplored territory for American women. "When I told my parents where I was going, my father was ecstatic," Terrell said. "My mother was convinced I would kill myself. But to me, everything was a wonderful adventure."

The team soon left for snow school, where the women, "learned how not to fall into a bottomless crevasse, and how to make snow caves and use an ice axe," Terrell recalled. "I wasn't scared, I was excited. Besides, we were going to the Dry Valleys. There were no crevasses there."

The McMurdo Dry Valleys region is one of the few areas of Antarctica not covered by thousands of meters of ice.

"An elementary school had sent us some curtains to use in Antarctica," remembered McSaveney. "They weren't terribly useful, but we did string them on the outside our tents, and photograph them. We sent the photos back to the class. Years later, I did several talks, which I called: 'The Only Tent with Curtains in the Antarctic."'

"We spent our days breaking rocks and hauling heavy backpacks full of rocks to send back for chemical analysis," Terrell said. "The wind blew all the time, and there was sand in our boots, sand in our clothes and sand in our food. There was sand in everything. We had oatmeal for breakfast every morning--not because we liked it, but because it was the only thing that was edible with sand in it." Terrell, a tall, strong broad-shouldered woman, never considered the physical differences between genders as she did work at the research sites. "On a farm, milking cows is not men's work or women's work, it's the work of whoever can do it," she said.

When a helicopter eventually came to pick up the women and their rock specimens and bring them back to the Dry Valleys, stereotypes once again were shattered. "One closed box was loaded with rocks," recalled McSaveney. "Terry picked it up and started lugging it toward the helicopter. One of the crew members immediately rushed up and said, 'Let me take that,' and grabbed it. He sank to his knees. I don't think his fellow crew members ever let him forget that." For the most part, the project went on as planned, and everyone got along. As Terrell pointed out, "Do you know many women who have fist fights?"

There were a few frightening experiences, however, including a helicopter crash that occurred after a bolt holding one of the propeller blades blew off, causing the blades to separate from the aircraft. The craft had just taken off.

"All of a sudden we heard what sounded like a rifle shot and the helicopter started falling out of the sky," Terrell said. "You know how young people feel immortal? In that one moment, I ceased being immortal."

Everyone survived, and interestingly, "we, the ladies, knew how to set up the survival equipment and the guys did not," Terrell said. "They did not pay attention in snow school. We'd started melting ice and making a meal by the time the rescue helicopter came."

Despite initial resistance to the idea of women in Antarctica, the Navy later sponsored a media event at the South Pole station, a location where women had never been. A ski-equipped LC-130 flew six women researchers there on Nov. 12, 1969. They included the four members of Jones' team; Pam Young, a biologist doing research with the New Zealand Antarctic program; and Jean Pearson, a science writer for the Detroit Free Press.

All six linked arms and stepped off the airplane's cargo ramp onto the ice together--so they all would be first. "Getting to the South Pole by climbing on and off an airplane hardly rivals the daring of the early explorers who walked there," McSaveney said. "Nevertheless, it was, of course, a great honor."

Ultimately, Terrell earned a doctorate in ecology and enjoyed a long career as an aquatic ecologist with the U.S. Fish and Wildlife Service. Retired in 2006, she now plans to earn a Masters degree in fine arts and quilting history. "It's time to stimulate the other half of my brain," she said. She has never been back to Antarctica, although it was "the most exciting, interesting place I'd ever been in my entire life."

Two years after her first trip, McSaveney returned to Antarctica for three months as a field assistant for her husband, Mauri, who was studying glacier movement. McSaveney, an American, lives in Christchurch with her husband, who is from New Zealand. She has worked as a writer and editor, specializing in geology and geological history, landscapes, glaciers, and natural hazards such as earthquakes, volcanic eruptions, floods and tsunamis. She also has taught geology, evolution and climate change at the University of Canterbury, and at local high schools.

For more about the 40th anniversary of women conducting research in Antarctica, see: Forty Years of Women Researchers in Antarctica.

Related Websites
LiveScience.com: Behind the Scenes:The First Women in Antarctica: http://www.livescience.com/history/091224-bts-women-antarctica.html
"Breaking the Ice," from the Antarctic Sun: http://antarcticsun.usap.gov/features/contenthandler.cfm?id=1946