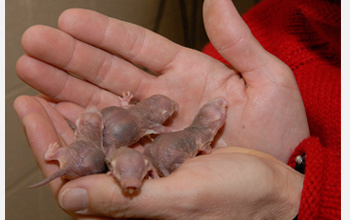 Naked mole-rats in the hands of biologist Thomas Park.

It was the scientist equivalent of love at first sight.

"They had huge teeth, they ran backwards as much as forwards, and they chatted among themselves constantly," Thomas Park said of the first time he saw a mole-rat during a post-doctoral year in Munich.

After starting his own lab in Chicago, he took his students on a field trip to the zoo and saw the critters again. "I thought they were great, and I knew right then and there that I had to get some of these guys into the lab," he said.

Park, professor of biological sciences at the University of Illinois (UI) at Chicago, began his scientific career studying how birds localized sounds, then switched to bats, examining the effects of sounds on their brain cells. After discovering naked mole-rats, however, he became fascinated with their unique social structure and decided to study them instead.

African naked mole-rats live underground and never come out. They are tiny, toothy, and blind; they look like little pink sausages; and they smell bad. These creatures, the only mammals that are cold-blooded, typically live in big colonies, of 300 members, about six feet underground. Their narrow tunnels are extremely close, and their air supply is limited. The air they breathe is so toxic that it would kill or lead to irreversible brain damage in any other mammal.

Theirs is a cooperative organization where one female and several males are reproductively active, while the rest of the colony members divide up the chores, which include searching for food.

Naked mole-rats have one queen, who mates with up to three males--none of the others participates in reproduction. "They are very, very strange animals," Park said. "They are the only mammals with this bizarre social arrangement."

His research focus is on evolution, specifically how species adapt to challenges in their environment. Nevertheless, his work with these unusual mammals has produced new insights into pain response and oxygen deprivation that ultimately could lead to new approaches for treating these conditions, as well as brain injuries caused by heart attack, stroke or trauma.

Park and his colleague, John Larson, associate professor of physiology in psychiatry at UI-Chicago, have discovered that the brains of naked mole-rats can withstand oxygen deprivation--a condition known as hypoxia--for periods far greater than any other mammal. They also found that the rats are immune to certain types of pain, specifically the burning pain of acid, like lemon juice, and capsaicin, the spicy ingredient in chili peppers. The creatures naturally lack a neurotransmitter, Substance P, which communicates information about pain.

"Our working hypothesis is that insensitivity to acid is an adaptation to living in an acidic environment," Park said. "In their home tunnels, carbon dioxide builds up to unusually acidic levels. This is because naked mole-rats live in unusually large numbers for a subterranean species."

The pain findings arose from the researchers' attempt to figure out how mole-rats used the whisker-like hairs on their bodies, which are arranged in a grid-like pattern--ten rows with about ten hairs in each row. "This type of strict organization suggested that the hairs were patterned for a reason," Park said.

Touching the hairs, he realized that "the mole-rats can use these hairs to very accurately localize touch," he said. "Deflecting any one of the hairs triggers the mole-rat to bring its snout, and teeth, to the point of contact. This made sense to us, that an animal which is essentially blind and naturally lives in the dark would benefit from a superb sense of touch and special array of touch detectors arranged over the body."

Further study of the nerve cells and the different chemicals associated with these cells led the researchers to the missing Substance P.

In the lab environment, Park's mole-rats live in PVC piping that mimics the underground tunnels of their natural habitat. The pipes are connected to clear plastic boxes which the animals use to store food, gather, and go to the bathroom. They designate one spot as a toilet. The boxes are kept in sealed, climate controlled storage rooms where the humidity is high and the temperatures are in the 90s. A caretaker checks the humidity levels twice a day. The mole-rats seem to do well in this environment--they are even reproducing.

"I think they're happy," Park said. "We give them food in one chamber--they get a sweet potato every day--so if they want to take pieces back to their 'nest', they can. We give them treats as well; they really love squash. They also really love apple, because they don't drink anything, so they go nuts over anything that's sweet and juicy."

Speaking of apples, several years ago, during a study of mole-rat foraging behavior, the researchers set up large tubs with an inch or so of sand on the floor of each tub. They then cut up apples into tiny bits and buried them in the sand. They wanted to find out whether the mole-rats would communicate information to other mole-rats about the food, or keep the information to themselves.

"Some of the tubs would get a lot of apple bits, while other tubs would only get a few," he said. "Then we'd open a pipe to the mole-rat cage system and let them forage. At the end of each day, we counted how many bits of apple were left in each tub. To retrieve the apple bits, we poured the sand through a screen."

The problem was that the room was dim, lit only by red light, making it difficult for the researchers to tell the difference between the apple bits and mole-rat poop, which was the same size and shape.

"There was one occasion when a student was certain he had an apple bit," Park said. "It looked like apple, it felt like apple, but just to be sure--yes, he tasted it. It wasn't apple. From then on, we carried the sand out of the dimly lit room and counted apple bits in the well-lit hallway."

While the mole-rats in the lab are not pets, the researchers have grown to appreciate their individual characteristics. "I don't name them, but it's easy for me to distinguish one from another," Park said. "They all look like sausages, but some are chubby, others skinny, some have more wrinkles, some are pinker. In general, they are very gentle creatures, but they most definitely have different personalities. Some are more curious, some more timid, some more bossy to their peers."

Park, 50, grew up in Baltimore, where his father is an associate professor of psychiatry at Johns Hopkins University. "We have one published journal article together, which was a lot of fun," he added. His mother, now retired, was a registered nurse at Johns Hopkins Hospital.

Park's interest in science began with a fascination for animals. "From my earliest memories, I loved having pets and going to the zoo. My parents were very understanding about this, and, at various times, we had guinea pigs, rats, dogs, cats, parakeets, many turtles, lizards, snakes, hermit crabs, a duck--and probably some that I forgot," he said.

He received a set of guinea pigs when he was in first grade. "Their names were Mr. Peep and Mrs. Peep," he said. "One day I decided to see if I could get Mrs. Peep to come up the stairs in our house, which meant jumping from stair to stair. I began by holding up a treat--a sunflower seed--so that she had to stretch to reach it. With each treat, I held it farther up, until the only way she could reach was to jump up to the next step. Not until many years later did I learn that what I was doing was called 'shaping' her behavior, a time-honored practice in animal laboratories."

Park is dyslexic, which made his early school years both challenging and frustrating. "I failed first grade and for years, I feared that I was dumb," he said. "Thankfully, my parents gave me support and encouragement, telling me things would get better, and they did. The real turning point for me was when I found college courses that I loved. Studying what I loved--animal behavior, learning, evolution--became very easy, and I never looked back."