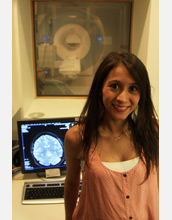 Stress can be compared with the pressure that a sculptor places on a piece of marble: the right pressure and it becomes a masterpiece, but too much pressure and the marble breaks into pieces.

The right amount of stress helps us to meet our goals and do good work. Too much stress can produce serious damage to the heart, the vascular system and the immune system, and it also causes changes in some areas of the brain.

With support from the National Science Foundation (NSF), Adriana Galván, a neuroscientist at the University of California, Los Angeles (UCLA), is studying the effect of stress on brain function in adolescents and adults.

"Studies on stress and cognition across development have mostly focused on chronic, severe and, often, traumatic stress, such as child abuse or neglect," Galván said.

"In our new research, we will determine what normative, daily stress, and associated stress hormones, do to decision making during adolescence."

When we are exposed to stress, the brain interprets the event as a threatening situation. The hypothalamus secrets adrenocorticotrophic releasing hormone (ARH), which stimulates the pituitary gland to produce adrenocorticotrophic hormone (ACTH). ACTH stimulates the adrenal gland, located on top of the kidneys, to produce adrenaline and cortisol, increasing blood pressure and heart rate. When the stressful situation is over, the hippocampus (in the brain) stops the production of these hormones so the body can return to its normal state.

Studies in animals show that chronic stress produces a decrease in the size of the neurons in some parts of the brain, such as the hippocampus and the prefrontal cortex, which are involved in memory and attention.

Chronic stress also produces an increase in the size of the neurons in the amygdala, the part of the brain involved in aggression, fear and anxiety. These changes in the brain can influence one's ability to make decisions.

Other studies have shown that the decision-making process, in situations that involve choosing between a risky versus a safe response, produces high activation of the insula (in the brain) and that chronic stress can decrease the activity of the hippocampus and prefrontal cortex, weakening memory and attention.

Galván monitors the level of stress in her study participants four times per day. When an individual records high or low levels of stress, he or she immediately comes to the lab for evaluation.

Data suggest that the greatest sources of stress for teens are parents, while for adults stress tends to come from work or schoolwork.

Once the individuals come to the lab, their levels of cortisol are evaluated. Galván explained, "We expect diurnal patterns of cortisol release to differ between adults and adolescents and that this distinction will correlate with levels of stress. Previous work has shown that, under identical stress conditions, teens show greater cortisol release than adults."

Participants also get a functional magnetic resonance imaging (fMRI) scan that allows the researchers to see which parts of the brain are working during a specific task.

According to Galván, "We anticipate greater ventral striatal and ventral prefrontal cortex activation during risky choices in the adolescent group, compared to adults. In adults, we expect greater insular cortex activity during non-risky (safe) choices. These effects will be exacerbated during times of high stress. In addition, we expect that adolescents will show greater recruitment of the amgydala during high versus low stress conditions."

The researchers predict that these findings will have a broad social impact. They will provide information to a broad range of specialists, including those in public policy, psychiatry, psychology, human development and education.

The study also provides evidence about how an individual's own stress influences his/her cognition and brain function versus previous studies that had induced stress in a laboratory setting. And it will show if adolescents are more susceptible to environmental stressors, potentially leading to new interventions and preventions that aim to reduce stress in clinically disordered populations.