How Do Bar-Headed Geese Manage to Migrate Over the Himalaya? 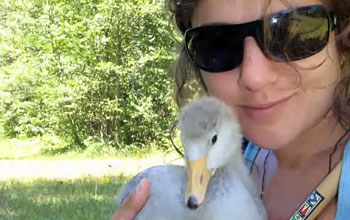 Imagine a woman riding a motor scooter down the street while flanked by a large bird flying almost cheek to beak with her. Could this be a harrowing scene from that famous Hitchcock horror movie, "The Birds?"

No: it's a carefully planned scene from an ongoing research project on a species of bird, the bar-headed goose, that is led by Jessica Meir of the University of British Columbia (UBC) in Vancouver, Canada. Meir is studying bar-headed geese for their special abilities: they manage to migrate over the Himalaya--conquering the cold, wind and low oxygen conditions of the mountains--while travelling between their winter feeding grounds in southern Asia and their summer breeding grounds in the Central Asian Highlands. Among the world's highest flying migrants, bar-headed geese have even been observed flying over Mt. Everest.

Meir's highest priority is to help determine how bar-headed geese tolerate the low oxygen conditions of the Himalaya. Meir would like to know, for example, how bar-headed geese obtain enough oxygen while flying over the Himalaya. Their high-flying feat is particularly amazing because flying increases the oxygen demand of the birds by 10 to 20 fold over resting levels, even though the air above the highest Himalayan mountains offers only about 30 percent of the oxygen offered at sea level.

Meir began her research by imprinting the birds on her. Here's how imprinting works: Birds consider the first thing they see and interact with after hatching to be their parent. So wanting the birds in her flock to imprint on her, Meir traveled to the Sylvan Heights Waterfowl Park in North Carolina--the home of the actual parent geese of her flock--in time for hatching. After three weeks of intense bonding and solidifying the imprinting process, Meir flew back to Vancouver with her gaggle in tow.

Now that the birds are imprinted on Meir, they follow her just as other birds follow their real mothers. To reinforce the birds' bond to her, Meir takes the birds on regular outings around UBC, where she is currently conducting her bar-headed geese research as part of an international research fellowship from the National Science Foundation's Office of International Science and Engineering.

The strong bond between Meir and her gaggle of bar-headed geese enables Meir to maintain close contact with the birds and to prepare them to take direction from her during experiments; these experiments will begin as soon as the construction of all of the experimental equipment is completed--much of which Meir is assembling herself.  These experiments will involve monitoring the birds while they fly in a wind tunnel under controlled conditions.

Each wind tunnel experiment will begin with Meir attaching electrodes to one bird's body, fitting the bird with a small backpack-like device that powers and records input from the electrodes, and equipping the bird with a custom-formed mask--made of dental plastic used for mouth guards--that fits on its beak. This mask has both an outlet to collect air exhaled by the bird and an inlet that directs controlled amounts of oxygen to the bird's mouth.

While the bird remains in flight, wind strength within the tunnel will be increased and oxygen levels flowing through the mask to the bird will be reduced to levels simulating the low oxygen conditions of the Himalaya. Meanwhile, various aspects of the bird's cardiovascular and respiratory systems will be measured.  For example, the bird's heart rate, oxygen levels and temperature will be monitored by the electrodes attached to the bird, and the bird's oxygen consumption will be measured by collecting exhaled air from its mask.

By identifying differences in the bird's physiology while flying in the wind tunnel under various levels of oxygen and comparing them to other birds, Meir hopes to better define how the bar-headed geese's respiratory and cardiovascular systems are adapted to high-altitude conditions. Although the physiology of bar-headed geese has previously been studied in the lab, Meir's wind tunnel experiments will represent the first time that these birds will be monitored while flying in the low oxygen conditions of the Himalaya.

The bar-headed geese's weapons against low-oxygen air also include their hemoglobin (a protein contained in red blood cells that binds oxygen molecules), which grabs oxygen particularly effectively at high altitudes, and thereby enables the birds to extract more oxygen from each breath of air than can other birds. Once the bar-headed goose's blood is stoked with oxygen, it rushes through capillaries that are especially densely distributed in these birds' muscles.

Thus fueled with oxygen, bar-headed geese can keep flapping their wings with seemingly inexhaustible gusto, sometimes reaching 50 miles per hour on their own power. Perhaps also capitalizing on winds, these high-fliers may even cover the one-way trip between India and Tibet--more than 1,000 miles--in a single day.

How do bar-headed geese stay warm during their cold flight through the Himalaya? The ceaseless exertion required of Himalayan crossings produces prodigious amounts of body heat. Helping the bar-headed goose to retain this body heat is an inner layer of highly insulating down feathers, and an outer layer of tightly woven waterproofing feathers that prevents body ice from accumulating, weighing the bird down and plunging it to its death.

Nevertheless, Meir says the "bar-headed goose's ability to tolerate extreme cold still remains a largely unexplored area." In addition to her focus on low oxygen levels, she hopes that her research, which will also involve monitoring the temperature of bar-headed geese while they are flying in the wind tunnel, will provide some insight into the bar-headed geese's adaptations to cold.

Meir is fascinated by bar-headed geese--a kind of super bird supremely adapted for life at the extreme--because "animals that live in extreme environments often push the limits of their physiological capabilities and may reveal unique adaptations." Also, she believes that learning about the secrets to the bar-headed goose's aerobic success may help scientists develop new therapies for human problems that may lead to oxygen deprivation, such as strokes, heart attacks, circulatory collapse and other traumatic conditions.