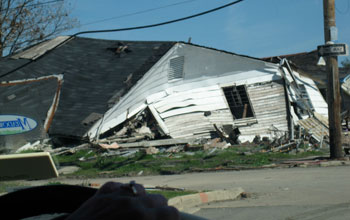 The PIIH can help prevent future hurricane devastation, such as the damage from Hurricane Katrina.

Each year, hurricanes cause tremendous destruction across the globe. It is not a coincidence that the word "hurricane" derives from Huracán, Hunraken or Jurakan, the evil god of winds and destruction in Mayan civilizations of Central America and the Tainos of the Caribbean.

But what makes them so menacing and powerful to deserve such mythos?

Yet, predicting the intensity of hurricanes is a difficult challenge.

"Accurately predicting intensity means vastly improving hurricane readiness and reducing the risk to property and human life," said Michael Hahsler, visiting assistant professor for computer science and engineering at SMU. "With more accurate predicting of intensity, governments and the communities they serve will be able to make better decisions on the extent of an evacuation and when to evacuate. This will result in real dollar savings as well as saving lives."

The PIIH algorithm is based on an aggregate hurricane model that uses previous data, including current maximum intensity, potential for increase in intensity, time of year, various temperature measurements, direction of storm movement and wind shear--the difference in wind speed and direction over a relatively short distance in the atmosphere. PIIH applies this model of past hurricane behavior to predict the intensity of current hurricanes up to five days from any given time point.

"When a future intensity is to be predicted for a current storm, similar states in the life cycle model are found," said Margaret Dunham, computer science and engineering professor at SMU. "A forecast is created by constructing a weighted average of forecasts from similar storm states found in previous storms. Confidence bands are constructed based upon observing the frequency distributions of intensity values found in previous storms. Based on these and the current intensity value, confidence intervals for future predictions are created."

By analyzing 2011 storms, through Hurricane Nate, which struck in September 2011, researchers observed that just over 96 percent of the PIIH observations fell within the 95 percent confidence band, which is a very high probability that the PIIH prediction confidence bands were accurate.

"It is important to note that a single predicted value is not as informative as ranges of expected values," said Hahsler. "The addition of these confidence bands to the actual prediction itself provides more input for local emergency personnel to make informed decisions and preparations."

At the end of the hurricane season, on Nov. 30, 2011, the PIIH research team, with assistance from the National Oceanic and Atmospheric Administration, will perform a detailed evaluation of PIIH's performance. Based on this analysis, the team will identify changes to PIIH to improve its accuracy.

"We will begin making changes to improve our PIIH forecasts for next year," said Dunham. "We also anticipate beginning more collaboration with meteorologists at the Cooperative Institute for Research in the Atmosphere at Colorado State University. The next step for the project is to hone in on the changes in hurricane intensity when a hurricane reaches land. We will be back next year to run an improved version of PIIH forecasting online."