Dashing Through the Snow, in a One-truck Radar Dish 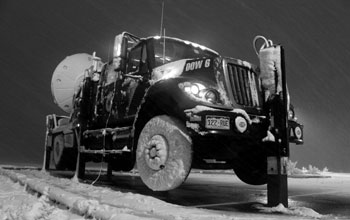 Snow, sleet, hail or blizzard: The Doppler-on-Wheels braves the elements.

SCHUSS. The term for a straight, downhill ski run. In the land of the "Greatest Snow on Earth"--Utah--SCHUSS is also the moniker for storm-chasing, Old Man Winter-style.

He and colleagues are "looking at the guts," Steenburgh says, "of winter storms in the Salt Lake Valley and surrounding Wasatch and Oquirrh Mountains."

The researchers peer through ice pellets and into the eye of a snowstorm, taking meteorological CAT scans to see a storm's inner workings.

The CAT scanner, in this case, is a truck-mounted radar dish called the Doppler-on-Wheels, or DOW. It's operated for NSF by the Center for Severe Weather Research (CSWR) in Boulder, Colo.

"Usually the DOW is squarely in the path of a tornado," says Josh Wurman, director of CSWR.  "But braving the winds that funnel down the Wasatch and howl into the Salt Lake Valley is just as hair-raising for the crew that sits inside."

The DOW, with a control room that rivals that of any airport tower, took up residence in Salt Lake City and environs from Oct. 21-Nov. 21, 2011.

More than a dozen University of Utah graduate students were trained to drive the truck and use the 6-foot-diameter radar dish transmitter and receiver.

The DOW can tell the sizes and shapes of snowflakes and raindrops; collect data on lower-elevation valley precipitation, and park very close to storms, getting an up-close-and-personal view of snow that sometimes falls literally sideways.

"Winter storms in Utah are a challenge to predict," says Steenburgh. "That's where the DOW comes in. It can be placed anywhere, allowing us to get a grip on lake-effect and mountain-driven storms, and to improve our weather prediction computer models."

The difference between snowstorm-chasing and tornado-chasing, he says, is that when the DOW is used on funnel clouds, "you're constantly driving to keep up. Tornadoes move really fast. But in a long-lived, multi-day snowstorm, we let the storm come to us."

During its Utah stint, the DOW shivered in the icy air of a dry cold front that snaked across the Great Salt Lake, withstood winds blowing off the lake and into Rush Valley, and caught a heavy snowfall in Little Cottonwood Canyon, home of the famed Alta ski area.

There it obtained images of the transition zone where snowflakes turn to raindrops.

The elevation of this transition zone is critical to forecasting whether a city like Salt Lake will see weather that's 32 degrees Fahrenheit with heavy snow--or 35 degrees with rain.

"The DOW helps us identify where precipitation is turning from rain to snow," says Steenburgh. "That's a big piece of figuring out how much snow is likely to fall at any particular location."

Sometimes it takes an all-nighter to find the answer.

Steenburgh and students--and the DOW--were sleepless in Salt Lake on November 4th and 5th, when a big snowstorm enhanced by the Great Salt Lake dumped several inches of snow on the Wasatch Front.

"Lake-effect snow is an important weather phenomenon in places like the Great Salt Lake Basin, and in many eastern regions of the Great Lakes," says Chungu Lu, program director in NSF's Division of Atmospheric and Geospace Sciences, which funds SCHUSS. "These snows can cause extremely hazardous conditions."

The scientists obtained never-before-gathered data on lake-effect snows from this early November storm. "It was phenomenal," says Steenburgh.

It was also the precursor to a wallop of a winter in the Wasatch.

"Compared with last winter's snowpack," says Steenburgh, "we're dealing with a far more insidious beast this year.  We've already had one avalanche fatality and natural and human-triggered avalanches continue to be reported in the backcountry."

Early season snows are to blame.

"What happened," says Steenburgh, "is that the mid-October snow sat for a few weeks on high-altitude northerly aspects [slopes], was fairly thin in depth, and developed faceted [loosely-fitted] snow crystals due to the presence of a large temperature gradient."

Mother Nature, he says, then dropped a load of snow on top of the earlier, weaker snow, "so we're dealing with a 'cranky' snowpack.  We need even more of that 'Greatest Snow on Earth.'"

Once the region receives enough snow to deepen the snowpack and reduce the temperature gradient, cooling things down, the snowpack will strengthen.

"But it will still have some places where it remains thin and may continue to be weak," says Steenburgh. "I call this a 'Russian roulette snowpack' because it can be strong in some areas, but be weak and loaded for an avalanche in others."

Who ya gonna call to schuss through such conditions?

The DOW has moved on to chase its next storms, but the data it retrieved will help skiers find safe snow--and meteorologists discern the next winter weather forecast.

Steenburgh writes a meteorological blog called "Wasatch Weather Weenies: Musings About the Weather, Climate and Powder of the Wasatch Front and Beyond."

Who ya gonna call when snowflakes turn to whiteout? Salt Lake City residents say Jim Steenburgh and the Weather Weenies.

But Steenburgh says there's something far better: It travels on the back of an ice-encrusted truck, dashing through snow, sleet, hail or whatever nature can dish out.

When the going gets tough, the tough call the Doppler-on-Wheels. Or the mountain of data its face-off with winter left behind.