Out of Africa and Into the American Midwest 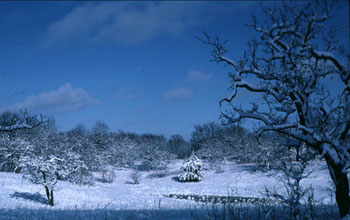 Grasses bend in the wind, their golden tips tracing arcs across fields that stretch toward the horizon. Sunwashed by a fading evening light, these reedy ballet dancers are central figures in savanna, an ecosystem that covers some 20 percent of Earth's land area.

The largest savanna--or grassland with widely spaced trees--is in Africa.

But the American Midwest is half a planet away from the equatorial grasslands of Cameroon's East Province or Kenya's Masai Mara.

Savannas are found throughout the world, but their dominant trees differ. In this lightly forested Midwestern savanna, bur oaks and northern pin oaks take the place of Africa's acacias.

Scientists at the National Science Foundation's (NSF) Cedar Creek Long-Term Ecological Research (LTER) site in Minnesota, one of 26 such NSF LTER sites across the globe, study a mixture of trees and grasses called oak savanna.

Oak savannas were once widespread across the U.S. Midwest, according to Peter Reich, an ecologist at the University of Minnesota who conducts research at Cedar Creek.

Early travelers across the northern tier states remarked about the "park-like" character of the region's vegetation. "They may have been the last to see unbroken miles and miles of oak savanna," says Reich.

"Conversion of oak savanna to agricultural land, changing deer and bison numbers, and frequency of fires and rainfall and fluctuating nitrogen deposition and atmospheric carbon dioxide levels are all threatening this important ecosystem," says ecologist Elizabeth Borer of the University of Minnesota. Borer is also affiliated with the Cedar Creek LTER site.

Today oak savannas are among the rarest plant communities on Earth. Cedar Creek is home to one of the last of these, savannas.

By their definition, oak savannas foster open-growing oak trees. When a single tree grows away from other trees, it doesn't face competition for light from its woody neighbors. Its branches are able to spread out and become very large. An oak savanna sprouts up in an already open area, which in the north-central U.S. is usually part of a prairie.

"Oak savannas here are found in a zone that's at the dividing line between forest and prairie," says Reich.

In Earth's warming climate, that prairie/forest line may march toward the northeast. "It's one of the reasons we're working to understand how the parts of this ecosystem fit together," Reich says.

In any story of the oak savanna, the primary characters are oak trees and prairie grasses.

Or so biologists thought.

Reich, along with researchers Rebecca Montgomery and Brian Pelc of the University of Minnesota, discovered that low-growing and oft-forgotten shrubs also play important roles. They reported their results in a recent issue of the journal Forest Ecology and Management.

"The response of shrubs to disturbance in oak savannas has important implications for management of these endangered ecosystems."

Before European settlement, the oak savanna was part of a larger "fire ecosystem." Fires, set by lightning or by Native Americans, ensured that savannas didn't become forests. Only trees with a high tolerance for fire, such as bur oaks, survived.

Homesteaders eventually cleared much of the oak savanna for agricultural uses. By removing tinder-box grasses, they suppressed the fire cycle. The pockets of savanna that remained became forest or thicket.

Oak savanna conservation and restoration efforts began in earnest in the 1970s. Controlled burns, such as those at Cedar Creek, have become a primary means of maintaining and restoring oak savanna. Woody shrubs that would otherwise overtake grasses and form thickets are weeded out by the scorching heat.

But the absence of fast-burning fires has allowed the plots to brush up with hazel, sumac and blackberry, eliminating most echoes of the true savanna.

One tract of bur oaks is threatened not by loss of fire, but by cattle grazing that took place until the 1970s. The cattle ate everything but unpalatable juniper bushes that grow in the area.

Junipers eventually dominated the understory to the exclusion of all other species. "The 'juniper savanna,' if one could call it that," says Reich, "may be interesting to look at, but all is not well there."

Many shrub species, such as American hazel, have adapted to disturbances like fire by vigorously resprouting afterward, says Montgomery.  "How fast they resprout influences the size and density of individual shrubs, and can alter the structure of the entire plant community."

"Shrub expansion has become problematic for management goals in some disturbance-dependent ecosystems [such as oak savannas] where natural resource values, habitat quality, plant diversity, abundance of economically-desired species and/or ecosystem function have been altered by increases in shrub abundance," the scientists wrote in their paper.

To find answers, Reich, Montgomery and Pelc measured the growth of individual American hazel shrubs in response to the frequency and timing of stem clipping in both open and shaded conditions.

In their experiments, clipping substituted for the effects of fire and was tested because of its use as a management and restoration tool.

In the 12 weeks after a spring clipping, American hazel shrubs in open oak savannas recovered 82 percent of their lost stem biomass, showing why a single fire or clipping treatment may not work to reduce shrubs like the hazel.

It's a management challenge for those working to preserve savannas, says Reich.

"More importantly," he says, "timing had as significant an effect on resprout potential as the number of clipping events." Even small differences were important.

Plants clipped in mid- and late June and in July regrew 57, 17 and 8 percent as much biomass, respectively, as those clipped in early June.

The results have much to say about fires set to maintain oak savannas: Fires that burn later in summer (compared with those in spring) would have a greater effect.

"If peak biomass production in American hazel occurs in June and early July, a typical prescribed burn in late spring may have little inhibitory effect on resprout vigor," says Reich.

The limited resprouting of American hazel later in the year could be of value to oak savanna restoration. "Many degraded sites need both thinning of tree canopy layer and understory [shrub] management," says Montgomery.

The last oak savanna may depend not on oaks or grasses, but on shrubby, on-stage interlopers. Without fires--or clipping that mimics fires--that enter the scene at the right time, oak savannas could be long gone.

Out of the American Midwest and into an English thicket.