By the Light of January's Wolf Moon

On the hunt, is bigger better for predators like wolves? 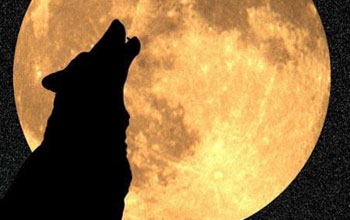 Icons of the wilderness, wolves howl across northern landscapes like Yellowstone National Park.

A cold-eyed moon rises above Lamar Valley in Yellowstone National Park. It is January. For Native Americans, it is the time of the Wolf Moon.

Not so their prey.

It's well past midnight and 10 degrees below zero Fahrenheit. The air itself is frozen in place. In the long dark of January, the stillness is so deep you can almost hear the rotation of the Earth.

Walking along a snow-covered bank is impossible in this colder-than-cold.

But not for a wolf.

A distant howl pierces the glassy air. Soon there's an echo, one wolf communicating with another from ridge to icy ridge. The faint but rising sound is an affirmation: the wolf survives.

The going isn't easy. Once common in much of North America, Europe and parts of Asia, gray wolves now roam a comparatively tiny range.

In the northern Rocky Mountains, natural migration from Canada and reintroduction programs in Yellowstone--which straddles Wyoming, Montana and Idaho--and central Idaho have fostered a wolf stronghold. About 1,200 wolves live in the region today.

Alaska has the largest population of gray wolves in the United States, around 6,000. Kazakhstan in Central Asia has the most of any country, some 90,000.

Hunting once felled countless numbers of the canines. Then in 1973, gray wolves were protected, listed as an endangered species under the U.S. Endangered Species Act. Certain populations of gray wolves, including those in parts of the northern Rockies, have recently been "delisted," once again opening these areas to hunting.

Worldwide, habitat loss and the effects of global warming threaten the long-term future for these icons of the wilderness.

In the short-term, wolves must find enough ungulate prey like elk to weather the winter. The bigger the wolf, the better its ability to hunt and take down such prey. Or so it would seem.

To find out whether larger body size in fact leads to better predator performance, ecologist Dan MacNulty of Utah State University studied whether wolves' size-related ability to handle prey might come at the expense of successfully pursuing that prey.

MacNulty, along with scientists Doug Smith of the Yellowstone Center for Resources, Dave Mech of the U.S. Geological Survey Northern Prairie Wildlife Research Center, and Lynn Eberly of the University of Minnesota, published the results in the Journal of Animal Ecology.

Theirs was the first research to look at the effects of physical development on the predatory ability of a free-living carnivore.

"This study reveals a suite of interacting traits that expand the traditional view of predator-prey interactions," says Saran Twombly, a program director in the National Science Foundation (NSF)'s Division of Environmental Biology, which funded the research.

"While the traits are specific to the Yellowstone wolf population, this evidence for the role of evolution in predator-prey interactions greatly advances our understanding of carnivores in general."

The notion that larger predators are overall better hunters "has been cited to explain why bigger carnivores take bigger prey, and why carnivores have evolved toward larger sizes," the biologists wrote in their paper.

"But apart from broad-scale comparisons demonstrating that bigger species and the bigger sex (males) kill larger prey, the extent to which increasing size improves the overall predatory performance of individual hunters has been largely untested."

Evidence that male lions fare worse than female lions at chasing fleet-footed prey, but are better at grappling larger prey that stand and fight, suggested that increased size might improve handling of prey--at the expense of successful pursuit of that prey.

Such a trade-off might explain why the largest carnivores lack flexible elbow joints and prefer the largest prey.

"Relating growth to hunting performance in wild carnivores is challenging because these animals are difficult to observe in nature, and their size is not easily measured immediately before or after a 'predator-prey interaction,'" says MacNulty.

"We were able to watch wolves hunting elk in Yellowstone because they often did so in daylight hours in open habitats, and we could estimate their size from body mass measurements recorded during concurrent monitoring of the population."

The researchers found that larger size did improve wolves' skill at strength-related tasks, such as subduing elk.  It didn't, however, increase performance in what's called locomotor tasks, like the fast footwork involved in culling an elk from a group.

Selecting prey requires choosing one elk from a group by chasing the entire group, which involves a burst of speed, says MacNulty. Then in a kill, a wolf needs to be able to grab and overpower its prey.

Larger size makes it easier for a predator to hold down its prey, once caught, but a predator can be only so large before body size gets in the way of the very act of catching.

A brawny predator may be better able to wrestle its prey to the ground, but in the quick movements of a chase, its slightly smaller kin may reign supreme.

To reach their conclusions, the scientists made repeated observations of 94 wolves in Yellowstone.

Biologists watched as the wolves hunted elk in the grasslands of the northeastern quarter of Yellowstone, referred to as the northern range. Lamar Valley, and other open valleys and ridges, are in this area.

"Low elevations there create the warmest and driest conditions in the park during winter," says MacNulty, "providing critical cold-weather forage for elk." A road that's maintained on a year-round basis runs the length of the northern range, giving researchers access to this snowbound plateau.

The scientists' evidence that predator performance (but not fleet-of-foot movement) increases with size in a wild carnivore "is notable because it provides the first direct support for the hypothesis that improved predatory ability favors the evolution of large size in carnivores," state MacNulty and colleagues in their paper.

"An important consequence of larger size, however, is that it increases energetic requirements and necessitates feeding on larger prey, which tend to be more difficult to kill than smaller prey."

The demise of the American cave lion and other large, North American carnivores at the end of the Pleistocene Epoch some 11,000 years ago, the researchers believe, may be linked to these species' inability to switch to smaller, faster prey.

At the end of today's Holocene Epoch, will the howls of Yellowstone nights be silenced?

Will January's moon no longer be marked by the sign of the wolf?