It's Wildflower Season on Mountain Peaks, But Alpine Plants May Soon Miss the Date 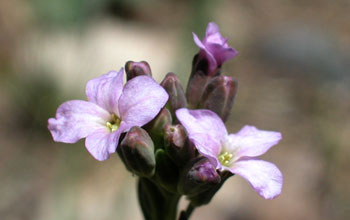 Flowers and buds on rockcress in the Colorado Rocky Mountains: earlier each year.

July brings a riot of color--a rainbow-hued carpet of wildflowers--to the high peaks of the Rocky Mountains.

In these mountain environments, however, plants have a narrow window of opportunity to set their buds.

Now, in a changing climate, that hurry-up-and-flower date is moving ever earlier on the calendar. How quickly can plants respond?

The alpine growing season in places like the Rockies doesn't begin until snows melt, sometimes as late as June. Snows may fall again by October.

In such habitats, snow covers the ground for eight to nine months of the year--or used to. In recent decades, climate change has warmed the planet and caused snows to melt earlier.

In response, plants and animals at high altitudes become active much sooner. In the case of plants, is it because their populations are evolving or because their flowering time is flexible?

A paper published this week in the journal Proceedings of the Royal Society of London - Biological Series reports that climate change has significantly affected Drummond's rockcress (Boechera stricta), an alpine plant native to the Rocky Mountains.

Using a unique combination of long-term data on the timing of flowering and snowmelt, and an experimental genetics approach, ecologists Jill Anderson of Duke University, David Inouye and Amy McKinney of the University of Maryland and Colorado's Rocky Mountain Biological Laboratory and colleagues found that Drummond's rockcress flowered 13 days earlier in 2011 than in 1973.

Other co-authors of the paper are Robert Colautti of the University of British Columbia and Thomas Mitchell-Olds of Duke University.

The change results from a combination of earlier flowering by individual plants and gradual genetic changes in the population of wildflowers.

"More than 38 years of data on flowering time gives us important insights into how this wildflower is responding to climate change," said Inouye.

If climate change continues at the same rate, Drummond's rockcress should bloom a month sooner by 2100 than it does now. Do the plants have the flexibility to change flowering time that much?

Faced with a new but uncertain threat, remaining flexible makes the most sense, said Saran Twombly, a program director in NSF's Division of Environmental Biology, which funded the research. "So it is with the plant species studied here. Flexibility in response to rising temperatures will contribute directly to its success."

Plants have evolved to bloom in response to certain climate conditions. Those conditions--timing of snowmelt, growing season temperature and light levels--have always signaled the beginning of the growing season.

Temperatures may increase into the foreseeable future, scientists believe, but climate change is unlikely to affect environmental variables such as light.

That results in a decoupling of previously reliable--and linked--cues, potentially disrupting the reproductive biology of many species that rely on multiple signals to bloom.

At the end of each summer, the seeds of Drummond's rockcress fall just beneath the mother plant. So the species has a limited ability to migrate to higher elevations to escape increasing temperatures.

Drummond's rockcress will need to adjust to climate change not by moving to cooler environs, but by finding a way to thrive right where it lives.

How will it succeed? Inouye says it will happen through a long-term combination of changing responses by individual plants and evolutionary changes by the population of wildflowers.

The only hope--at least for the Drummond's rockcress--may be as an earlier and earlier early bloomer.