Into the Matorral: Scientists Track Avifauna in Coastal Chile's Thorn-Scrub 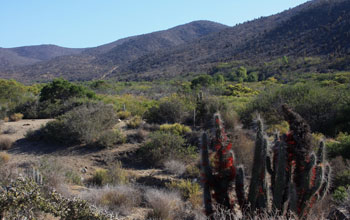 Camanchaca, or coastal fog, drapes the mountains of coastal north-central Chile, supporting remnants of a Valdivian temperate rainforest. The forest is a legacy of the last glacial period.

Surrounding the rainforest is coastal matorral habitat. In this thorn-scrub zone, shrubs brandish spines to protect themselves from being eaten by herbivores.

The Chilean matorral is part of a biome known as "Mediterranean forests, woodlands and scrub." It covers central Chile, with the Pacific Ocean just to its west. To its north lies the dry-as-dust Atacama Desert, which separates the matorral from the tropical forests of northern South America.

Braving the thorn-scrub are scientists Douglas Kelt, Andrew Engilis, Jr., and Robert Walsh of the University of California, Davis; Peter Meserve of Northern Illinois University; Juan Monardez of the Institute of Ecology and Biodiversity in Santiago, Chile; and Julio Gutierrez of the Universidad de La Serena in Chile.

The team works in the coastal matorral, making their way through low, soft scrublands that extend from La Serena in the north to Valparaiso in the south.

The team is studying the seasonal patterns of birds in the matorral of Chile's Bosque de Fray Jorge National Park. The park is perhaps best known for its Valdivian temperate rainforests. The camanchacas that hang on the mountain slopes allow the forests to survive despite their arid surroundings.

Birdlife in the rainforests--and in the matorral--is abundant in this biodiversity hotspot.

The scientists published results of six years of research on the avian fauna of Bosque de Fray Jorge's matorral in a recent issue of the journal The Condor.

In a comparison of summer and winter seasons, the researchers discovered that bird diversity varied greatly in the park. "Eighteen species constituted a core group of residents in almost all our surveys," says Kelt, the paper's lead author, "but at least another 15 species were nomadic or migratory."

The site supported more insect-eating birds in winter, but more seed-eaters and generalist-feeders during the breeding season.

The avifauna of the Fray Jorge thorn-scrub may be largely made up of insectivores and seed-eaters, but it also includes some birds that are carnivorous, among them the aplomado falcon, cinereous harrier and short-eared owl.

Last but certainly not least, says Engilis, a single piscivore, or fish-eater, was spotted: the Peruvian booby. "This marine forager isn't a typical element of the thorn-scrub fauna, however," he says.

Rainfall at the site fluctuated over the study's six years, "but the change was minor compared with that caused by El Niño over the 20-year duration of our research," says Engilis.

"This study relies on long-term observations to reveal key ecological characteristics of bird communities in a biodiversity hotspot in northern Chile," says Saran Twombly, program director in the National Science Foundation's (NSF) Division of Environmental Biology, which funded the research.

"The results provide the foundation needed to evaluate the effects of climate variation, such as El Niño events, and of human-induced climate change, on both local and global biodiversity."

Although the scientists documented many species that are seasonally abundant, says Kelt, "what's not clear is whether these species are nomadic wanderers or truly migratory--or where they go when they leave the park."

Migration isn't as common in South America as in North America, says Meserve, in part because of the smaller area of temperate habitat. But many species in Chile move "latitudinally, altitudinally or across the Andes with the seasons."

Birds at Fray Jorge likely migrate across both altitudes and latitudes. Some species, such as the white-crested elania and rufous-tailed plantcutter, move across latitudes. During banding efforts in 2008, both species were found with large fat reserves reminiscent of North American migratory species covering long distances, says Engilis.

Learning more about South American migration patterns should be a priority, say the scientists.

The effects of climate change are on the horizon. New insights are important, the researchers believe, for current and future conservation and management decisions for Bosque de Fray Jorge National Park, and for other such biodiversity hotspots.