From Lake to Land, in a Land of Lakes

Moose act as conduits of nitrogen between water bodies and the edges of lakes, ponds 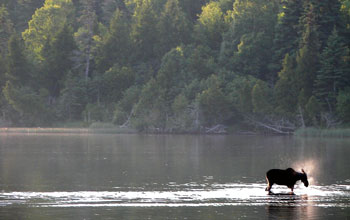 Isle Royale is a perfect place for moose.

What animal can see only a limited distance, has no top front teeth, and prefers shady, wet areas such as bogs and marshes?

If you guessed a moose, Alces alces, you'd be correct.

When summer or autumn travels take you through northern regions dotted with lakes and ponds, you may glimpse this creature, water dripping from its bell--the flap of skin under its throat. It's most often visible in early morning and at dusk, and in low, wet areas.

Like many of us, moose don't like hot weather. They overheat at summer temperatures above 59 degrees Fahrenheit (15 degrees Celsius). So, on hot days they take to the waters--the edges of wet bogs lined with shade trees.

What moose find there is of interest to ecologists Joseph Bump, Rolf Peterson and John Vucetich of Michigan Technological University.

With funding from the National Science Foundation (NSF), the scientists study relationships between moose, wolves and the environment on a remote island in Lake Superior called Isle Royale. The project has been ongoing for five decades.

Isle Royale is a perfect place for moose: Water in every direction; shores lined with pondweed, water lilies and other aquatic vegetation upon which moose feed; and nearby forests laden with other favored moose foods like the buds and twigs of willow, aspen, red dogwood and balsam fir trees.

Moose live in the northern areas of North America, Europe and Eurasia in the cold climates of mixed deciduous-coniferous forests. They're the northern forest's largest herbivores.

Each moose chomps down about 3 million bites of shrubs and trees and eats 3 metric tons of leaves and twigs every year. The Ojibwe people, Native Americans long familiar with the animal, call it "mooz," meaning "twig eater."

A typical moose, which weighs almost 800 pounds, may eat up to 70 pounds of food each day. The average adult moose consumes some 9,770 calories per day to maintain its body weight.

Some of a moose's energy comes from vegetation that grows on land, but many land-based plants are low in sodium. The larger plants of lakes, ponds and wetlands, known as aquatic macrophytes, provide moose with the sodium they need. As much as half a moose's diet consists of aquatic macrophytes.

Where do the remains from all this foraging wind up?

They come ashore, according to research conducted by Bump, Peterson and Vucetich, along with Keren Tischler of Common Coast Research & Conservation in Hancock, Mich., and Amy Schrank of the University of Michigan Biological Station.

When moose forage on aquatic macrophytes, which are also rich in nitrogen, then make their way onto land, they're acting as a conduit for the plants' nitrogen. Spots in which moose excrete waste, and where they die, are direct routes from water-to-land for this element.

The scientists looked at how this process happens by analyzing data on moose densities, foraging parameters, excretion models and moose carcass locations. They published the results in a paper in the Journal of Animal Ecology.

Predators also influence that nutrient transfer. On Isle Royale, when moose are killed by wolves, what's left of their bodies decomposes, transferring nitrogen from the aquatic plants the moose once ate to the land that ultimately lies beneath them.

"It's hard to imagine what species as diverse as moose, salmon and midges, for example, might have in common," says Saran Twombly, a program director in NSF's Division of Environmental Biology, which funded the research.

"Yet all three transfer significant quantities of nutrients from aquatic to terrestrial habitats. On Isle Royale, wolves add to this total amount. They kill moose in specific locations and generate 'hotspots' where nitrogen is transferred from lake to shore."

Moose first arrived on Isle Royale in the early 1900s and increased rapidly in what was once a predator-free environment. Then wolves found their way to the island in the late 1940s; they crossed a winter ice bridge that connected Isle Royale with mainland Ontario. "The lives of Isle Royale moose would never be the same," says Vucetich.

The island's moose population is usually between 700 and 1,200 animals. Wolves there, now down to nine, at times have reached nearly 50.

"It's clear that moose link aquatic macrophytes with terrestrial animal and microbial communities," says Vucetich. "Our analysis of long-term carcass patterns--where moose die--shows exactly where such food web links occur on the landscape.

"Given the circumpolar extent of moose, they and the wolves that prey upon them are an important aquatic-terrestrial resource vector in northern ecosystems."