Science on the Graveyard Shift

Discovering what gets buried and how 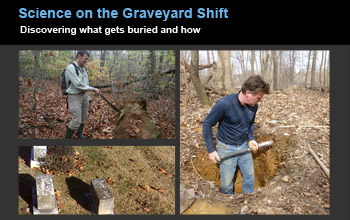 View a photo gallery of scientists in a graveyard.

By dark of night in an old graveyard, things rustle. At least if that cemetery is at London Grove Friends Meeting in Kennett Square, Pa.

Look between the oldest markers, or under a gnarled oak tree that's been guarding the graveyard since the time of William Penn in 1682. You'll find not a ghost, but a scientist, probing the dirt for the secrets it might reveal.

"These soils have been undisturbed for centuries, if at all, and they hold the key to understanding how humans have altered the landscape," says geoscientist Anthony Aufdenkampe of the National Science Foundation's (NSF) Christina River Basin Critical Zone Observatory (CZO) on the border of Delaware and Pennsylvania.

To discover answers, Aufdenkampe, who is also affiliated with Pennsylvania's Stroud Water Research Center, is in graveyards taking samples at noon and at midnight. "We do a lot of storm-chasing to follow erosion," says Aufdenkampe, "so we're often out at the 'witching hour.'"

The Christina River Basin CZO is one of six NSF CZOs in watersheds across the nation.

In addition to the Christina River Basin site, CZOs are located in the Southern Sierra Nevada, Boulder Creek in the Colorado Rockies, Susquehanna Shale Hills in Pennsylvania, Luquillo riparian zone in Puerto Rico, and the Jemez River and Santa Catalina Mountains in New Mexico and Arizona.

They're providing us with a new understanding of the critical zone--the region between the top of the forest canopy and the base of unweathered rock: Our living environment--and its response to climate and land-use changes.

It all starts with bedrock and with rotting soil.

To scientists, this putrid rock, as the Greeks called it, is known as saprolite. It's the first stage of the continuous transformation of rock to fertile soils, says Aufdenkampe, and needs thousands to millions of years of mixing by water, plants, microbes, worms and other organisms.

But its journey doesn't end there.

For centuries, researchers thought that these building blocks of life stayed close to home--that the molecules in a falling leaf didn't travel far before meeting their ultimate fates. They returned to the atmosphere as greenhouse gas, or became incorporated into the soil.

They're testing the idea that erosion and mixing of soil minerals with carbon in fresh plant remains--and subsequent burial downslope or downstream--is the key to what happens to the carbon, and to the greenhouse gases it forms.

Aufdenkampe and colleagues published results of a study comparing carbon transport in watersheds such as the Christina River Basin and others around the world in the February 2011, issue of the journal Frontiers in Ecology and the Environment.

"Society has long recognized the importance of water, soil, vegetation and land forms to human welfare, but only recently have we begun to holistically probe the workings of these coupled systems in projects like the CZOs," says Wendy Harrison, director of NSF's Division of Earth Sciences, which funds the CZO network.

"This new way of doing science will allow us to predict how an entire watershed will respond to land use and climate change."

Scientists once believed that they could understand whether a forest or a field was storing greenhouse gases by studying small research plots alone.

"Now we know that we need to look carefully at all the forms of carbon that leave a plot and flow downhill and downstream," says Aufdenkampe. "We need to follow the carbon and the soil from saprolite to the sea."

Twists and turns of the Christina River

Sippunk, Tasswaijres, Minquess Kill. The Christina River has been known by these names and many others.

It's a tributary of the Delaware River; its 35 miles flow through southeastern Pennsylvania, northeastern Maryland, and into Delaware. From Franklin Township, Pa. to Wilmington, Del., the Christina River and its tributaries drain an area of 565 square miles.

Its streams supply 100 million gallons of water each day for more than half a million people in three states.

The first European settlements in Delaware sprang up near the confluence of the Christina and Delaware rivers. Trees lining the banks of the rivers, and across the land, were felled. In their place came farms and factories.

How has the region's human history affected rivers and streams that now course through forests and farms, suburbs and cities? And how has this centuries-old legacy changed the carbon cycle in the Christina River Basin watershed?

To find out, Aufdenkampe picks up a shovel. As he digs through fallen leaves and several feet of dirt on a streambank flanked by gravestones, stripes of soil begin to emerge.

In their center is something dark and moist. Perfectly preserved, it's a part of the bank buried hundreds of years ago by erosion caused by colonial forefathers.

Scientists at the Christina River CZO hope to discover how this sediment--and that above and below it--was deposited, and where waterways may carry it next, if anywhere.

"How are humans affecting the carbon cycle in a watershed like the Christina River Basin?" asks Aufdenkampe. "How far afield does what happens here go? Does it reach the Delaware, the Atlantic or beyond?"

Research at the CZO takes a "whole watershed" approach to discovering where carbon and other elements end up.

"They usually have one of three fates," Aufdenkampe says, "a return to the skies as a greenhouse gas, incorporation into the tissues of a living organism, or burial in soils and sediments."

From dust to dust

Where do scientists look for clues to those ultimate fates? They dig into soils and scour waterways, with a stop along the way near a local cemetery or two.

"Soils under ancient trees and in old cemeteries provide a geochemical reference that we can use to estimate human-caused erosion elsewhere on the landscape," says Aufdenkampe.

People inevitably leave their mark on the land, he says. But will the carbon buried by 400 years of human activities give up the ghost and move on, or will it rest in peace?

"In the future," Aufdenkampe asks, "will what's in the soil return to haunt us all?"