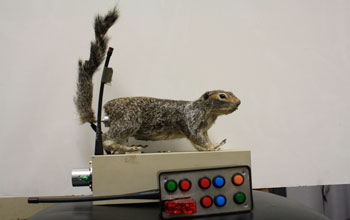 It's alive! Well, not quite. This is a robot that mimics squirrels to test snake responses to them.

If you were to judge from now-clichéd chase scenes in wildlife documentaries, you might think that predator-prey interactions are simple and predictable: A predator sees, chases, kills and then eats its prey. End of story.

But don't let such scenes fool you. Recent research indicates that at least some predator-prey interactions are remarkably intricate, with nuanced interactions sometimes determining their outcomes. This research includes the collection and analysis of video recordings of interactions between rattlesnakes and their prey--including squirrels, chipmunks and lizards--by a research team led by Rulon Clark of San Diego State University.

Snakes: Here, there and everywhere

Why is Clark focusing his research on rattlesnakes? Because rattlesnakes are key members of many food chains. A case in point: Clark's research has pegged the rattlesnake--not a mammal (e.g., the mountain lion, coyote or bobcat)--as the most abundant predator by overall biomass in the Blue Oaks Ranch Reserve, which is located in a mountainous area about 10 miles from San Jose, Calif.

Clark says that the rattlesnake's surprising abundance in the reserve is partly due to its cold-blooded biology, which enables individuals to survive by consuming as few as two or three animals per year. By contrast, warm-blooded predators must eat much more frequently.

Clark's research also indicates that rattlesnake densities in the reserve even exceed those documented elsewhere throughout California, including the remote Mojave Desert. Clark attributes this disparity to the protection afforded by the reserve to populations of rattlesnakes and their prey, which have remained relatively undisturbed by ranchers and hunters for many decades. Therefore, the reserve's high density of rattlesnakes probably represents a natural state that underscores the important influence of these carnivorous reptiles in some types of ecosystems, including those that may be located relatively close to developed areas.

Despite the ecological significance of rattlesnakes, their predatory behavior has been largely understudied. Why? For one thing, rattlesnakes are masters of camouflage, and are furtive and secretive. Therefore, these creatures are difficult to find and follow in the field.

1) Striking and hitting a prey animal, usually from only about 10 inches away.

2) Envenomating the prey animal, which may attempt to escape before succumbing to the snake's venom.

3) Relocating the envenomated prey animal after it succumbs to the venom.

However, rattlesnakes usually complete the first and second steps of each attack in less than 1 second--too fast to be observed in detail with the naked eye. What's more, weeks or even months may pass between a rattlesnake's attacks. Therefore, observing predation by rattlesnakes in the field usually demands more patience and luck than could reasonably be mustered by even the most dedicated researchers.

Rattlers ready for their close-ups

In light of the difficulties of researching rattlesnake predation, how in the world are Clark and other researchers managing to observe rattlesnakes in the field? Largely with the help of various ingenious high-tech methods. For example, with funding from the National Science Foundation, Clark and his team are currently filming natural interactions between rattlesnakes and their prey in the field by using radio tagging and a network of wireless video cameras.

Here is how this research works: The researchers catch and radio tag wild snakes, release them back into the wild, and then track the radio-tagged snakes to find individuals that are poised in ambush coils. When they find coiled snakes, the researchers plant portable mini video cameras just 1 to 3 meters away from them to film their predatory behavior at close range.

According to Clark, these video cameras are advantageous because "unlike people, they are as patient as a snake," so they can be used to stake out a snake as long as necessary to capture its quick pulses of predation.

Once the researchers successfully record snake predation, they simply fast-forward through the inevitably long segments showing inactivity, but replay predatory segments as many times as necessary. What's more, the researchers may view predatory segments on a frame-by-frame basis to identify the exact distances, movements and timing of movements of rattlesnakes and their prey during their interactions. The researchers are thereby deriving more specific and precise information from video recordings than they could from live, non-filmed observations of rattlesnakes and their prey.

Video recordings produced by Clark's team have revealed that about 50 percent of strikes by wild rattlesnakes are unsuccessful. This research has also revealed that rattlesnake attacks are most commonly thwarted by a rapid, evasive dodge maneuver initiated by the prey during the fraction of a second after the rattlesnake starts to strike, but before the rattlesnake reaches its prey.

Nevertheless, the researchers also discovered that rattlesnakes may strike out during any of the three steps required for a successful attack. For example, the researchers have observed rattlesnakes clearly strike their prey, but then fail to seek the struck animal. The researchers suspect that, in such cases, the rattlesnake knew that it had not successfully envenomated its prey, and so chose not to risk devoting energy to a potentially fruitless pursuit.

The researchers have also observed rattlesnakes fatally strike prey, but then fail to relocate their envenomated prey after it succumbed to the venom.

The predator-prey relationship between rattlesnakes and California ground squirrels is ancient; it originated about 10 million years ago between ancestors of these species.

As these two species evolved, they developed "a kind of arms race, where an adaptation by one of them triggered the evolution of an adaptation in the other," says Clark. (This type of arms race is similar to that between increasingly strong antibiotics and the resulting ongoing evolution of super-microbes that are increasingly resistant to antibiotics.)

The rattlesnake's adaptations include toxic venom as well as a specialized infrared-sensitive pit organ on its face that can sense heat, and thereby help the animal find prey.

In addition, California ground squirrels sometimes flag their tail by raising and wagging it back and forth and increasing their tail temperature before entering underground burrows or patches of plants that are particularly likely to conceal rattlesnakes. Such tail flagging had previously been interpreted solely as a warning to other prey about the presence of rattlesnakes that had been seen by the flagging squirrel. But this interpretation has recently been challenged by observations that California ground squirrels may perform the tail signals whether or not they have actually seen a rattlesnake in the area.

In addition, California ground squirrels that have seen coiled rattlesnakes have been observed to approach, inspect and repeatedly tail flag near the snake for several minutes; this type of signaling appears to be directed at the coiled snake.

Such observations inspired Clark and his team to research the possibility that the squirrels may use tail wagging and tail heating (both of which may be seen by rattlesnakes) to communicate with predatory rattlesnakes in addition to other prey.

Specifically, the researchers suspect that squirrels may perform two types of tail signaling:

As increasing numbers of squirrels discover and advertize a rattlesnake's presence at any particular location, the rattlesnake's ability to complete successful surprise attacks on prey at that location decreases. Therefore, after rattlesnakes are discovered and "outted" by tail-flagging squirrels, they frequently abandon their hunting areas for undiscovered hunting areas where they would still have the advantage of surprise--even though flagging squirrels wouldn't usually pose a serious, direct threat to them.

Note that when squirrels flag their tails, they may inadvertently announce their presence to other types of predators besides rattlesnakes, including birds of prey. Because such predators are not as dependent on the element of surprise as rattlesnakes, they would not necessarily be inhibited from attacking by tail flagging. So even though tail flagging may help protect squirrels from rattlesnakes, it may, under some circumstances, increase their risk of being attacked by other predators. Therefore, squirrels probably reserve their tale flagging for certain circumstances that have, as yet, not been specifically identified.

To test Clark's ideas about vigilance advertizing and perception advertizing from squirrels, he and his research team are currently recording controlled encounters between live rattlesnakes and a life-like robotic squirrel, which can be programmed to wag its tail. What's more, its body can be heated by copper coils to anatomically correct temperatures, and its tail temperature can be increased above its body temperature during predator-prey interactions.

The robotic squirrel's body is made from taxidermic skin, and it has a realistic smell because it is stored in squirrel bedding when off-duty.

Because the robotic squirrel's behavior may easily be manipulated in ways that a live squirrel's behavior cannot be, it may be used to help test the responses of rattlesnakes to various squirrel behaviors that would otherwise be impossible to produce and observe. For example, Clark's team is currently conducting experiments that involve introducing live rattlesnakes to the robotic squirrel while its tail is motionless, wagging, and wagging and heated--behaviors that cannot be reproduced by a live squirrel on command under controlled conditions.

Clark will compare rattlesnake responses to the robotic squirrel's various tail behaviors in order to help identify the functions of the tail signals. For example, suppose that--as predicted by the researchers' ideas about the purposes of tail flagging--the experiments show that when the robotic squirrel's tail is wagging and heated, it inhibits attacks from rattlesnakes and compels rattlesnakes to abandon their ambush sites.

Also, suppose that the experiments show that when the robotic squirrel's tail is motionless, it does not elicit any particular response from rattlesnakes. Such results would support the researcher's hypothesis that the tail signaling is designed to inhibit attacks and compel rattlesnakes to abandon their ambush sites.

But suppose, on the other hand, that the experiments show that no matter how the robotic squirrel's tail behaves, it neither inhibits rattlesnake attacks nor compels rattlesnakes to abandon their ambushes. Such results would help refute the researcher's ideas about the functions of perception advertising and vigilance advertising.

Alternatively, the experiments may show that the wagging of squirrel tails alone and/or heated tails alone elicit different responses from rattlesnakes than do these signals together.

The ascent of robots

In addition to creating a robotic squirrel, teams of scientists and engineers have recently created robotic models of bees, fish, lizards, cockroaches, rats, sage grouse, frogs and other organisms. These types of robotic creatures are currently being incorporated into studies addressing diverse topics, including, for example, the design of search-and-rescue robots and the development of methods to save schooling fish from oil spills and other natural disasters. Because of advancements in technology and the decreasing costs of robotics, increasingly sophisticated robotic models will likely soon be incorporated into varied types of scientific studies.