High-peak Creeks, Forest Fires and Landscape Erosion: Could They Be Linked? 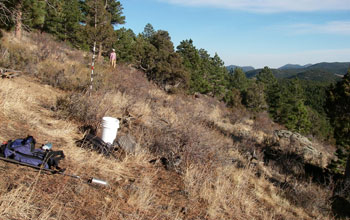 Fire and water. One scorches the other, only to be drowned in return. Could their effects on a watershed be related?

Boulder Creek is a 31-mile-long stream draining the Rocky Mountains to the west of Boulder, Colo., as well as the city itself and surrounding plains.

At the Boulder Creek CZO, scientists see fire and water as being closely tied to the landscape--and to what's below that landscape in the subsurface environment.

"Ultimately, it's the landscape that controls where fires are most likely," says scientist Suzanne Anderson of the University of Colorado Boulder, director of the Boulder Creek CZO.

"It all begins with the presence of the mountains," she says, "with the landscape beneath the forests and streams."

The Colorado Front Range, whose mountains Boulder Creek plummets down, are the stage upon which fire, water and forests are set.

Take the Fourmile Canyon fire of September 2010. It burned 6,400 acres, destroyed 169 homes and caused more than $217 million in damages.

The wildfire raged through the Boulder Creek watershed's rugged terrain. The resulting deforestation, CZO scientists have found, left the area at risk of flooding and erosion, including debris flows from the fire.

The Boulder Creek CZO is one of six NSF CZOs in watersheds across the nation.

In addition to the Boulder Creek site, CZOs are located in the southern Sierra Nevada, the Christina River Basin on the border of Delaware and Pennsylvania, the Susquehanna Shale Hills in Pennsylvania, the Luquillo riparian zone in Puerto Rico, and the Jemez River and Santa Catalina Mountains in New Mexico and Arizona.

They're providing researchers with a new understanding of the critical zone--the region between the top of the forest canopy and the base of unweathered rock.

"The critical zone is our living environment," says Enriqueta Barrera, a program director in NSF's Division of Earth Sciences, which funds the CZO network. "The CZOs offer us new knowledge about the critical zone and its response to climate and land-use change."

They're the first systems-based observatories dedicated to understanding how the Earth's surface processes are coupled, she says. "They will help us predict how the critical zone affects the ecosystem services on which society depends."

The water cycle, the breakdown of rocks and eventual formation of soil, the evolution of rivers and valleys, patterns of plant growth and landforms all result from processes that take place in the critical zone.

"The CZOs," says Barrera, "are fostering a new view of the critical zone as one holistic system."

What are the long-term effects of the Fourmile Canyon fire and other wildfires on watersheds such as Boulder Creek?

Since the Fourmile Canyon fire, scientists at the Boulder Creek CZO and the U.S. Geological Survey have been tracking discharge rates, nutrients, metals and ecosystem characteristics such as numbers and species of invertebrates that live in streams.

Runoff from burned north- and south-facing slopes is being measured to assess how hillslopes respond differently following fire.

Instruments have been placed on the hillslopes, and in soils along Boulder Creek's banks, to record changes. Stream water and soil chemistry are being compared with those of nearby unburned areas.

Monitoring continues during snowmelt when water levels are high, and during "gully washer" summer thunderstorms.

In the summer of 2011, for example, a severe storm led to an 8,100 percent increase in stream discharge in Fourmile Creek, a tributary of Boulder Creek. "That was some three times higher than had ever been measured," says Anderson.

The storm flooded homes and blocked roads with sediment. It also resulted in concentrations of in-stream total suspended solids that were 4,000-fold above baseline.

Some of that sediment remains in the creek channel, then flows downstream when more rain falls in the area.

These studies are but a few of "many taking place at the Boulder Creek CZO on everything from how the 'architecture' of the critical zone affects its hydrology to the role trees play in the critical zone's evolution," says Anderson.

With its high peaks, the Colorado Front Range "harvests" precipitation from the atmosphere. Most of that precipitation falls as snow. The snowpack becomes a reservoir, and the mountains act as a water tower.

"The distribution of water resources in western North America is actually controlled by the geologic history of the region," says Anderson. "It sets the location, height and width of the moisture-trapping and moisture-holding mountain ranges."

Forests near Boulder Creek--and everywhere in the West--are found in mountain ranges. Moisture is high enough there for trees to flourish, and precipitation evaporates more slowly.

But where forests grow, fires often aren't far behind. "With more droughts in recent years," says Anderson, "we're more at risk of fires."

The role of erosion

The Front Range--more than 10,000 feet high at its crest--is eroding, says Anderson, but very slowly.

For the most part, "it's cool and moist there," she says, "and 'soil-mantled'--the soil wasn't scraped away by the glaciers that covered the region in the distant past."

Most of this slowly eroding terrain has been sliced by rivers, which have hollowed out deep canyons such as Boulder Canyon.

"The canyons are giant drains carved into the terrain," says Anderson. "They lower the water table of surrounding slopes. Their erosion history sets up broad regions of well-drained, forested landscape."

That well-drained landscape is the corridor where big fires, such as the one in Fourmile Canyon, have happened.

"The topography of the Front Range is interconnected with water and fire in the landscape," says Anderson.

At Boulder Creek, scientists are looking down into the subsurface, Anderson says, "to understand how the landscape evolved into its present state, and how that controls everything from where forests are found to how fast weathering of subsurface rock takes place to a watershed's ability to collect and store water." And, perhaps, to put a fire out.

Meanwhile, the creek flows onward, cutting into the mountain landscape as it goes--and carrying parts of the Rockies with it.

"Amber and white and black in the arrested spaces," wrote H.H. Jackson in 1878 in "Bits of Travel at Home," "[Boulder Creek] whirls under bridges and round the corners, doubles on itself, leaps over and high above a hundred rocks in a rod, breaks into sheafs and showers of spray, foams and shines and twinkles and glistens; and if there be any other thing which water at its swiftest and sunniest can do, that it does also, even to jumping rope with rainbows."

A perfect description, says Anderson, of the role of fast-flowing streams in the critical zone.