Facing the future: it all depends on sea ice 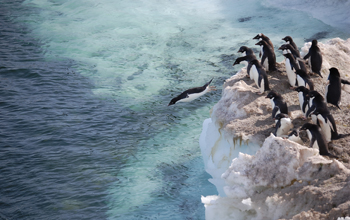 For decades, David Ainley, a National Science Foundation- (NSF) funded researcher with the ecological consulting firm H.T. Harvey and Associates, has studied Adélie penguins in Antarctica. Ainley says the birds appear to be coping in different ways in response to climate change, but there is one question that begs an answer: What are their overall chances of survival?

In 2009, Ainley, a long-term polar researcher, and co-PIs, Grant Ballard of PRBO Conservation Science and Katie Dugger of Oregon State University, received a five-year NSF grant to conduct research how penguin populations cope with climate change and on how individual birds cope. He especially wanted to know why some penguins succeed in coping with climate change while others do not, and what qualities successful birds have.

NSF manages the U.S. Antarctic Program, through which it coordinates all U.S. research on the southernmost continent.

The Adélie is unique because researchers understand how the penguin relates to its land and ocean habitats in the current climate. Using data from the historical record and relating it to present day changes, scientists are able to predict how climate change will affect the penguins, principally through changes in sea ice. Also, researchers say paying close attention to successfully breeding penguins offers clues as to how penguins as a whole will cope in the future.

Every November, David Ainley and his colleagues travel to the Antarctic for months to study Adélie penguins at Cape Royds and Cape Crozier. Ainley has been in the field doing this since 1996.

"We find these birds and use GPS and nest tags to note where they are, with the idea that we'll be coming back repeatedly during the season to keep track of their success or failures.

"In this particular project, which has gone on for 17 seasons now, we are up to 17-year-old penguins. So we are getting some idea of the mechanisms of their population regulation, like how breeding success and mortality affect their population growth rates, and how this changes with age and experience," says Ainley.

Each year, the Adélie penguins of Ross Island return from wintering at sea on ice floes to large bird colonies where they build nests and breed. The transition from ice floes to bird colonies is always a risky undertaking because of the harsh environment and predators.

Success during this transition for especially young penguins depends entirely upon the cooperation of both parents, for feeding and foraging. Adélie penguins must travel repeatedly from the colonies into the adjacent ocean to find food, which can be tricky and dangerous.

The yin and yang of sea ice

Icebergs, glaciers, ice sheets and ice shelves all originate on land, whereas the sea ice upon which Adélies depend is frozen ocean water. Sea ice forms, grows and melts in the ocean depending on the season.

Except when the wind blows sea ice away, these Antarctic seas are covered by ice floes--pack ice--and it is in these ice-covered waters that Adélie penguins find the fish and krill that they eat.

However, in certain instances, there can be too much ice. Penguins are really great at swimming but are slow at walking. Areas of open water allow the penguins to be more efficient at foraging and bringing back food to their chicks. For their size, Adélies can dive deeper and hold their breath longer to reach farther under ice floes than can penguin species that avoid sea ice.

Not surprisingly, the Adélie colonies are highly sensitive to minor changes in the amount of sea ice, which itself is responsive to changing climate.

"When the cover on the ocean reaches around 70 percent ice and there's only 30 percent water, conditions become more difficult for Adélies," says Ainley. "Above that point, penguins begin to have problems with access to the sea and spend too much time walking. Around 20 percent ice cover is ideal for them."

In 2001, a huge iceberg, designated B15, broke from the Ross Ice Shelf and grounded against Ross Island, hampering the summer disintegration of sea ice cover. This prevented Adélie penguins from reaching prey and ultimately from producing offspring. The penguin colony at Cape Royds also suffered significant losses.

"Because of the 50 miles of sea ice, the penguins had to walk across to get to open water. The young adults, returning to look for territories, after a short way decided that the walk wasn't worth the effort and began to visit colonies such as at Cape Bird, closer to seas only partially covered by ice," said Ainley. "Adults who had nested at Royds before undertook the entire trip initially, but then deserted. After failing to breed for a couple of seasons even these adults began to look for nesting territories elsewhere."

The researchers were able to learn this about the penguins because each year at each of Ross Island's three penguin colonies, the researchers band a large number of chicks just before they make their first trip to the sea.

Ainley and his colleagues place on the birds metal rings imprinted with numbers to identify individual penguins. Bands are placed around the penguins' flippers near their "arm pits." The researchers band 400 chicks each year at the small Royds colony and 1,000 at the other, larger colonies.

The bands can be read using binoculars from 20 feet away. Once banded, a penguin will never again need to be caught and handled. Much of the researchers' time is spent hiking and looking for these birds at all the Ross Island colonies.

Prior to the B15 Iceberg there were about 4,000 pairs of Adélie penguins at Cape Royds. By 2005, the last year the iceberg blocked access to the ocean, the population had decreased to 2,000 pairs, roughly equivalent to the numbers that were there from 1909 to 1911, when British explorer Ernest Shackleton stayed at Cape Royds.

"These penguins ignored the rule of thumb that scientists believed for decades--that penguins are faithful to their colony of birth--and began to emigrate to other colonies, not just as young recruits but birds that bred previously in their respective colonies. This totally tore up the book on how penguins should relate to their chosen habitat," says Ainley.

Currently, Ainley and his fellow researchers are trying to determine why some penguins, year after year, are more successful than others. They discovered that only 20 percent of individuals are successful breeders for consecutive years. They dubbed this group of penguins "super breeders" and believe that these penguins will hold clues as to how the species will adapt to a changing ocean.

"We've been studying the foraging behavior of these super breeders, comparing it to other penguins, and we found that the super breeders are kind of the Michael Phelps of the penguin world. Their foraging trips are shorter because they dive deeper, dive more rapidly with shorter rest periods at the surface, and ultimately bring back more food to their chicks," Ainley said.

Ainley was able to learn this about penguins because he had marked all the penguins in one group of nests at each colony using microchips injected under their skin. The chips are called "passively integrated transponders," or PIT tags.

In going from their nests to the sea and back again, the tagged penguins must walk through a hoop-shaped antenna, which reads the chip's electronic numbers--almost like "bar codes" on items at supermarkets. As they pass through the hoop, the penguins also cross an electronic scale that assesses their weight. The information is sent to a computer to be stored.

By knowing when penguin parents come and go from their nests, how much they weighed when they went to sea, and how much they weigh upon their return, researchers are able to determine the amount of food each penguin caught over what time period. In addition, using tape, Ainley applies small instruments to the back of penguins that record their diving behavior, and with the help of a satellite connection, pinpoints where they went to find food.

The ocean-going skills of the penguins are important when it comes to finding prey, and finding it quickly. The fish and krill that Adélie penguins pursue are often in just one school of fish, which they keep revisiting. If the penguins wait too long to catch their breath before diving again, their meal may have swum away or competitors may have eaten it. Then they must search for another school, which takes time and energy. If Adélie penguins are to be successful, efficient swimming and foraging skills are essential.

Ainley and colleagues hope to determine how age, experience and physiology affect the skill set of penguins in their pursuit of prey. Also, Ainley wants to know if experience or inheritance has critical bearing on breeding success for these penguin athletes. The next steps in his research relate to a penguin's breath-holding capabilities.

"We are interested in the capability of their blood to hold oxygen. So we are collecting a little bit of blood from a penguin after it goes on a foraging trip to look at its red blood cell count and hemoglobin levels, as measures of oxygen-storing capabilities," he says.

Ainley hopes that by investigating the foraging capabilities of super breeders, we can understand the much larger picture of how Adélie penguins will cope with climate change.

Ultimately, the amount of sea ice will dictate how the penguins respond. If the sea ice goes away entirely, the penguins will disappear, but more subtle changes before then will be important. With the unstable environment in which they live, Adélie penguins are being tested.

"I'm trying to encourage kids and students to stay in the sciences, technology, engineering and math fields, so they can have jobs like this. My job is very interesting and scientific work is fun; it takes you to extraordinary places around the world," says Pennycook.

Pennycook draws teachers and students from many countries into her living classroom in Antarctica. She chats with students over Skype from her tent about what it is like to be a researcher in the Antarctic, gives them a tour, and answers questions about wildlife.

Pennycook started a penguin postcard project in which students draw a picture of penguins on a self addressed postcard about penguins and give it to her so that they can receive their postcard with an Antarctic postmark. In addition, teachers and students can design a flag that will be flown in front of the PenguinCam that daily takes pictures of the Cape Royds penguin colony. Students can also follow the lives of eight penguin families while they raise their chicks.

Pennycook hopes more teachers and students will visit the Penguin Science website to see the abundance of resources and activities for educators to use in their lesson plans.

Apart from engaging young students, Pennycook has had former students down in Antarctica. She used to run an intern program where students had a work-study experience at a research station. For Pennycook, she knows she's reaching students when they follow in her footsteps.

"It makes me proud. It makes me smile that the information I brought back to my students, just showing them this place, showing them how something they can do widens their horizons... I'm hoping to open doors and inspire them to do something fun with their lives," says Pennycook.

For more information about the research by David Ainley's group and the penguin educational program, please see the Penguin Science website.