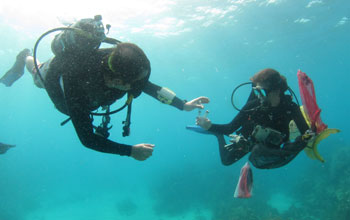 Hot on the underwater trail: scientists Dusty Kemp and Meredith Meyers in the Florida Keys.

Take one wastewater treatment plant and place it anywhere along the Caribbean coast. Then--by a means unknown to science--kill coral reefs near the plant.

"You'd have all the makings of a great mystery novel," says ecologist James Porter of the University of Georgia.

Except that, in this case, the story would be true.

Coral killer on the loose

The greatest decline was in elkhorn coral (Acropora palmata). The species has disappeared from more than 90 percent of its former habitat.

Elkhorn coral was once the most common coral in the Caribbean. It's now protected under the U.S. Endangered Species Act.

"Most elkhorn coral that died in the Keys had signs of a disease known as white pox before its demise," says Porter.

Hot on the trail of where the white pox was coming from, Porter and other scientists ultimately identified human sewage outflows as the source of a pathogen that causes the disease.

Along with colleagues Kathryn Sutherland of Rollins College and Erin Lipp of the University of Georgia, Porter discovered that the bacterium killing the coral is also found in humans.

But where was it coming from? From the land, it turned out, not the sea: in human waste.

"When we first identified the bacterium Serratia marcescens as the cause of white pox," says Sutherland, "we could only speculate that human waste was the source of the pathogen because it's also found in the wastes of other animals."

Serratia marcescens is in the gut of humans and in that of other land-based animals.

To trace the source, the researchers collected and analyzed samples from a wastewater treatment facility in Key West, and samples from animals such as deer and seagulls.

While Serratia marcescens showed up in these non-human animals, genetic analyses demonstrated that only the strain from people matched that found in white pox-diseased corals.

Investigators on the scene

"The final piece of the puzzle," says Porter, "was to determine whether it was pathogenic to corals."

The scientists exposed fragments of elkhorn coral to the strain found in humans to find out if it would cause the disease.

The experiments were carried out in a laboratory in closed seawater tanks to eliminate any risk of infection to wild populations of corals.

"Within five days, the human strain caused the disease in elkhorn coral," says Sutherland. "We then had definitive evidence that people were the source of the pathogen."

Adds Porter, "These bacteria didn't come from the ocean. They came from us."

In humans, Serratia marcescens results in respiratory, wound and urinary tract infections, as well as in meningitis and pneumonia.

Human diseases caused by the bacterium are often linked with hospital-acquired infections in newborn infants and in immune-compromised adults.

"Humans are affecting the rest of the living world in many ways, including sharing our diseases," says Sam Scheiner, National Science Foundation (NSF) director of the joint NSF-National Institutes of Health (NIH) Ecology and Evolution of Infectious Diseases (EEID) Program, which funds the research. "This work demonstrates that such sharing may be happening in ways we would never have predicted."

The five-year NSF-NIH EEID study is supported by NSF's Division of Ocean Sciences. Its focus is on how the coral pathogen is transmitted and the factors that drive the emergence of white pox outbreaks, including water quality, climate variability and human population density.

"We're concerned that disease incidence or severity may increase with rising temperatures," Lipp says, "so it's important to protect near-shore water quality in a changing climate."

To date, the study has revealed a disease pathway--from humans to wildlife--that's the "opposite" of the traditional wildlife-to-human disease transmission model. The results have been published in the journal PLOS ONE.

The movement of pathogens from wildlife to humans is well-documented--in, for example, bird flu--but the transfer of disease-causing microbes from humans to marine invertebrates has never before been proved.

"This is the first time a human disease has been shown to cause deaths of a marine invertebrate," says Porter. "Bacteria from humans kill corals--that's the bad news. But the good news is that we can resolve it with advanced wastewater treatment facilities."

The Florida Keys region is in the process of upgrading its wastewater treatment plants. The measure, the scientists hope, will eliminate this source of the bacterium.

"We need to address the water quality conditions that favored the establishment and survival of this pathogen in the marine environment," says Porter.

For now, who's the only culprit in the "Caribbean Coral Mystery"? Surprisingly, says Scheiner, "it's none other than ourselves."