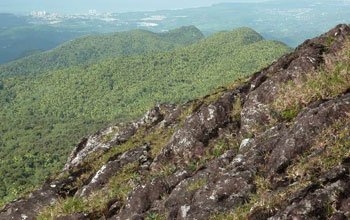 The peak El Yunque presides over the island of Puerto Rico.

El Yunque. It could be the name of an ancient chieftain. On the island of Puerto Rico, in a sense it is.

El Yunque, Spanish for "the anvil," is a majestic, flat-topped promontory. It stands high above rivers and streams below, and has been an icon since pre-Columbian times.

With Puerto Rico's humid tropical climate, El Yunque should be covered with plant life--and should be eroding rapidly, say scientists. But it isn't.

To solve this mystery, researchers from the National Science Foundation's (NSF) Luquillo Critical Zone Observatory (CZO) set out to measure the current rate of the rock's erosion.

El Yunque is usually shrouded by mist from clouds. Swept by the trade winds, it's often buffeted by hurricanes. The barren rock, some 3,412 feet tall, lords over miles of rainforest that surround it on all sides.

It's showered with rain an average of three times a day--in total, more than 14 feet of rain every year. That rain cascades down El Yunque's headland, then flows through the Luquillo watershed in rivers and rivulets.

The Luquillo CZO is one of six NSF CZOs in watersheds across the nation. In addition to the Luquillo site, CZOs are located in the Southern Sierra Nevada, Christina River Basin on the border of Delaware and Pennsylvania, Susquehanna Shale Hills in Pennsylvania, Boulder Creek in the Colorado Rockies, and the Jemez River and Santa Catalina Mountains in New Mexico and Arizona.

NSF-supported scientists are providing a new understanding of the critical zone--the thin veneer of Earth that extends from the top of the forest canopy to the base of weathered bedrock.

The water cycle, the breakdown of rocks and the eventual formation of soil, the evolution of rivers and valleys, and the patterns of plant growth and landforms all result from processes that take place in the critical zone.

"The critical zone is our living environment," says Enriqueta Barrera, a program director in NSF's Division of Earth Sciences, which funds the CZO network. "The CZOs offer us new knowledge about this important zone and its response to climate and land-use change."

The CZOs are the first systems-based observatories dedicated to understanding how the Earth's surface processes are coupled, she says. "They will help us predict how the critical zone affects the ecosystem services on which society depends."

To find an answer to El Yunque's slow erosion rate, scientists Jane Willenbring, Gilles Brocard and the late Frederick Scatena of the University of Pennsylvania used a new approach to calculate how it has changed over time.

The method involved counting isotopes, or variants, of chemical elements that accumulate in rocks when they're hit by cosmic rays from space.

Using these particular isotopes, called cosmogenic nuclides, the researchers confirmed that forest soils that aren't disturbed by human activity erode at rates of 250 to 500 feet per million years.

Undisturbed forested areas in Puerto Rico, for example, have eroded some 1.6 to 3.2 inches since Europeans first landed there in 1498.

The scientists also found that the presence of forests can greatly reduce erosion, even in a steep environment frequently visited by hurricanes.

An ecological view from El Yunque

The Luquillo critical zone is chemically weathering at a wide range of rates. "But its thick weave of matted roots and vegetation holds in the soil and stabilizes the hillslopes such that they erode more slowly than one would expect," says Willenbring.

On the other hand, Puerto Rico waterfalls such as the well-known La Coca Falls are eroding comparatively quickly. Water rushes in torrents through steep canyons and gullies there, carrying gravel and boulders with it.

"A wave of erosion--whether fast or slow--affects all parts of the critical zone," says Willenbring. "It sets the tempo for how quickly minerals and nutrients are ferried to the surface, which in turn feed the forest above.

"We were surprised by how connected the landscape is. It seems as though even the trees understand geomorphology."

How passive are soil microbes and trees? Do they position themselves where it's best to live, or do they actively change the environment they're already in?

To answer these questions as they apply to El Yunque, cosmogenic nuclides allowed researchers to make the first measurements of the erosion rate of the peak.

El Yunque's surface is eroding about 13 feet every million years; it has lost only 0.08 inches since the Europeans first arrived.

Its relatively slow rate of erosion explains why El Yunque juts above the forest.

"The texture and composition of the rocks that form El Yunque are more erosion-resistant than those of the surrounding landscape," says Willenbring.

Why? El Yunque is a remnant of an ancient supervolcano named Hato Puerco. The volcano was one of the region's largest and most active volcanoes during the Cretaceous period 145-66 million years ago.

"El Yunque's hardness and chemical properties came from being 'cooked' in the chamber of the volcano," says Willenbring. Other rocks weren't subjected to this same heating; they're "softer" and less resistant to chemical breakdown and erosion.

Puerto Rico's icon is a hard-headed cap atop the island, Willenbring says, one that escaped the geologic fate of all other rocks there.

This article is dedicated to the memory of the late Fred Scatena, former principal investigator of the Luquillo CZO.