Blue Mussels "Hang On" Along Rocky Shores: For How Long? 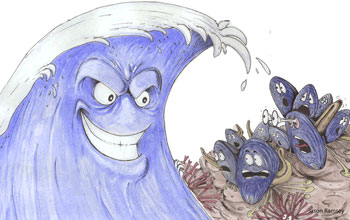 Blue mussels face a threatening wave in this logo for the research team's project.

Imagine trying to pitch a tent in a stiff wind. You just have it secured, when a gale lifts the tent--stakes and all--and carries it away.

That is exactly what's happening to a species that's ubiquitous along the rocky shores of both the U.S. West and East Coasts: the blue mussel.

Mussels make use of what are called byssal threads--strong, silky fibers--to attach to rocks, pilings and other hard substrates. They produce the threads using byssus glands in their feet.

Now, scientists have discovered, the effects of ocean acidification are turning byssal threads into flimsy shadows of their former selves, leaving mussels tossed about by wind and waves.

At high levels of atmospheric carbon dioxide (CO2)--levels in line with expected concentrations over the next century--byssal threads become weaker, less able to stretch and less able to attach to rocks, found scientists Emily Carrington, Michael O'Donnell and Matthew George of the University of Washington.

The researchers recently published their results in the journal Nature Climate Change; O'Donnell is the lead author.

The pH of the seas in which these and other marine species dwell is declining. The waters are turning more acidic (pH dropping) as Earth's oceans change in response to increased CO2 in the atmosphere.

As atmospheric carbon rises as a result of human-caused CO2 emissions, carbon in the ocean goes up in tandem, ultimately resulting in ocean acidification, scientists have found.

To study the effects of ocean acidification on marine organisms, Carrington has been awarded an NSF SEES (Science, Engineering, and Education for Sustainability) Ocean Acidification grant.

"We need to understand the chemistry of ocean acidification and its interplay with other marine processes--while Earth's seas are still hospitable to life as we know it," says David Garrison, program director in NSF's Division of Ocean Sciences. "In the rocky intertidal zone, blue mussels are at the heart of those processes."

Land between the tides

Visit the land between the tides, and you'll see waves crashing on boulders tinged dusky blue by snapped-closed mussels.

"Their shells are a soft color, the misty blue of distant mountain ranges," wrote Rachel Carson more than 50 years ago in her best-selling book "The Edge of the Sea."

For blue mussels trying to survive, the rocky intertidal zone indeed may be akin to scaling a mountain range.

The rocky intertidal is above the waterline at low tide and under water at high tide--the area between tide marks.

It's home to such animals as starfish and sea urchins, and seaweed such as kelp. All make a living from what floats by rocky cliffs and boulders.

It can be a hard go. Rocky intertidal species must adapt to an environment of harsh extremes. Water is available when the tide washes in; otherwise, residents of this no man's land between sea and shore are wide open to the elements.

Waves can dislodge them, and temperatures can run from scalding hot to freezing cold.

Hanging on for dear life

In the rocky intertidal, blue mussels hang on for dear life.

That may not always be the case.

Combining results from laboratory experiments with those from a mathematical model, Carrington and colleagues have shown that at high CO2 concentrations, blue mussels can be dislodged by wind and wave forces 40 percent lower than what they are able to withstand today.

Mussels with this weakened ability, once dislodged from their homes, could cause ecological shifts in the rocky intertidal zone--and huge economic losses in a global blue mussel aquaculture industry valued at U.S. $1.5 billion each year.

"Mussels are among the most important species on rocky shores worldwide," says O'Donnell, "dominating ecosystems wherever they live. The properties in their byssal threads are also of interest to biochemists and have been studied as possible medical adhesives."

"Some species of mussels are experts at gluing onto seagrass, some to other shells, some even adhere to rocks in the harsh conditions of deep-sea hydrothermal vents. Each may have different genes that code for different proteins, so the adhesives vary."

Will their potential be realized? Carrington, O'Donnell and George have found a disturbing answer.

The scientists allowed mussels to secrete byssal threads in a range of ocean water chemistries from present day through predicted near-future conditions, then tested the threads to see how strong they were.

At levels considered reasonable for a near-future coastal ocean (given current rates of acidification), byssal threads were less able to stretch and therefore less able to adhere. Further testing revealed that the problem was caused by weakening of the glue where the threads attach to rocks and other hard surfaces.

Ocean acidification beyond shells and corals

"Much ocean acidification research has focused on the process of calcification," says Carrington, "through which animals and some plants make hard parts such as shells."

In acidifying oceans, marine species that depend on calcium carbonate have a more difficult time forming shells or, in the case of coral reefs, skeletons.

"But there's more to marine communities than calcified parts," says O'Donnell. Other species such as mussels and their byssal threads, he says, are equally important.

"Understanding the broader consequences of ocean acidification requires looking at a variety of biological processes in a range of species."

A need that didn't exist when Rachel Carson wrote "The Edge of the Sea."

"When we go down to the low-tide line, we enter a world that is as old as the Earth itself--the primeval meeting place," mused Carson, "of the elements of earth and water."

And of mussels and rock. Fifty years hence, will the mussels still be here?