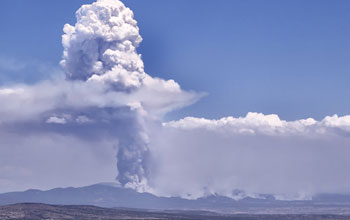 New Mexico's 2011 Las Conchas fire as it races down the flanks of the Jemez Mountains.

If a tree falls in a forest and no one is around to hear it, does it make a sound?

The tipping of one tree as it creaked and fell hinted at a crackle soon to come, a fast-burning wildfire. Ultimately, the fire blazed through a large part of a 1.5 million-acre national forest.

On the day the fire started, strong, unpredictable winds blew through the trees, rustling leaves and creaking dead wood. Perhaps in a gust, a lone tree fell. On the way down, it took out a power line and sparked a fire that, by high noon the next day, had burned 43,000 acres, an acre every two seconds.

At sundown that next day, the Las Conchas fire, as it came to be called, still ran wild. The toll had climbed to more than 61,000 acres of forest. Egged on by north winds, it jumped the trails of the Pajarito Mountain ski area. Then it turned and raged south, threatening the town of Cochiti, N.M.

Within four days, it had singed more than 103,000 acres, making it the largest fire in New Mexico history at the time.

What happened to the forests, rivers and streams the Las Conchas fire left behind?

To find out, scientists at the National Science Foundation (NSF) Jemez River Basin and Santa Catalina Mountains Critical Zone Observatory (CZO), one of six such NSF CZOs in watersheds across the country, lit out for the hills.

In addition to the Jemez River Basin and Santa Catalina Mountains site in New Mexico and Arizona, NSF CZOs are located in the Southern Sierra Nevada, Christina River Basin on the border of Delaware and Pennsylvania, Susquehanna Shale Hills in Pennsylvania, Boulder Creek in the Colorado Rockies, and Luquillo National Forest in Puerto Rico.

CZO scientists provide a new understanding of the critical zone--the thin veneer of Earth that extends from the top of the forest canopy to the base of weathered bedrock.

At the Jemez River and Santa Catalina Mountains CZO, researchers are asking questions such as: How does climate variation affect arid and semiarid ecosystems? And, how do feedbacks between critical zone structure and the cycling of water and carbon alter short-term hydrology and long-term landscape evolution?

The water cycle, the breakdown of rocks and the eventual formation of soil, the evolution of rivers and valleys, and the patterns of plant growth and landforms, all result from processes that take place in the critical zone.

"The critical zone is our living environment," says Enriqueta Barrera, a program director in NSF's Division of Earth Sciences, which funds the CZO network. "The CZOs offer us new knowledge about this important zone and its response to climate and land-use change."

The CZOs are the first systems-based observatories dedicated to understanding how Earth's surface processes are coupled, she says. "They will help us predict how the critical zone affects the ecosystem services on which society depends."

Fire burns long after it's out

Water is at the top of that list of ecosystem services.

The freshwater supplies of the American West rely, for the most part, on snow.

As snow melts into water, it begins a journey that starts in the mountains and ends in faucets. When people turn on the shower or the sprinkler, they're watering themselves, lawns and food crops with melted snow.

The Colorado River, the Rio Grande and other rivers in the intermountain west are the main sources of water for some of the driest parts of the country, say Jemez River Basin and Santa Catalina Mountains CZO scientists Jon Chorover and Paul Brooks of the University of Arizona and Adrian Harpold of the University of Colorado.

"Their flows are predominantly fed by snowmelt from high-elevation forests and meadows," says Brooks.

Snow-covered forests are "a critical source of water in the Western U.S.," agrees Chorover. "Forests' ability to 'hold snow' can be affected by fires, tree diseases, insect-caused die-offs and other factors."

The Las Conchas fire provided a unique opportunity to "evaluate how forest fires interact with a changing climate," says Harpold, first author of a recent paper on the fire's effects on winter snow and spring snowmelt published in the journal Ecohydrology. Brooks and other scientists are co-authors.

"Forest fires have been increasing in size and severity for the last several decades," Harpold says. "Drier and warmer than average conditions in New Mexico in 2011 contributed to fires like Las Conchas.

"When the fire removed the forest canopy, more water vapor was lost from the snow surface to the dry atmosphere, reducing the amount of water stored in the snowpack and released the following spring."

In essence, the scientists found areas not burned in the fire retained more snow--and snowmelt water.

Into the Valles Caldera

The Valles Caldera National Preserve, it's called, a parkland that surrounds the Valles Caldera, a 13.7 mile wide volcanic caldera in the Jemez Mountains of northern New Mexico. The preserve overlaps the Jemez River Basin CZO.

Valles Caldera National Preserve was the site of the scientists' study; their research was conducted on Rabbit Mountain near the park's southern boundary.

In November 2011, the researchers placed instruments in several catchments, or river basins, on Rabbit Mountain. The resulting information is being used to better understand the effects of fire on the water, carbon and energy cycles of the entire Jemez River Basin.

In the winter and spring of 2012, Brooks and Harpold, along with other researchers and students, collected and analyzed thousands of data points on snow depth and density in burned and unburned forests on Rabbit Mountain.

"We obtained one of the most complete datasets to date on snow hydrology and fire," says Brooks.

Whether in spruce-fir or pine-oak, the Las Conchas fire left much of Rabbit Mountain with severe burns. Dead, limbless trees, ghosts of the forest, line the horizon.

In unburned forests, about one-third of the fresh snow that fell in the winter of 2012 was caught in trees before it reached the ground. There, shade and wind protection allowed it to accumulate over the winter.

Where trees were lost to the fire, more fresh snowfall made it to the ground. In the end, however, that was a double-edged sword: Lack of shelter from the forest canopy resulted in more of the snowpack disappearing over the winter.

"Such changes in snowpack depth have important ramifications," says Chorover, "for ecological health and for downstream water resources."

After the Las Conchas fire, if a tree falls in the forest and no one is around to hear it, does it make a sound?

If you're listening for burbling spring brooks or streaming kitchen faucets, you may hear nothing but drip, drip, drip. Or silence.