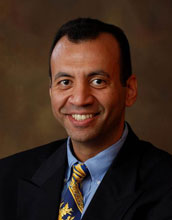 Not everyone likes to make decisions alone. People sometimes need feedback. Now they have a social media site that can give it to them.

"Think of it as 'Facebook for decision-making,'" says Ali Abbas, an associate professor in the Department of Industrial and Enterprise systems engineering at the University of Illinois at Urbana-Champaign, who designed the new system. "The idea was to build a decision support site online through a social network."

Abbas studies the process of decision-making, including its many behavioral and theoretical aspects. He also teaches it, not just to his students, but to the population at large, such as teens in juvenile detention, where understanding how to make the right decisions can have a significant impact on their lives.

"It was really impressive to see these young teens think about how they were making decisions," Abbas says of his experiences teaching decision-making skills to teenagers in the Champaign County Juvenile Detention Center. "The session had some touching moments when residents shared their hopes about changing their lives. The residents in juvenile detention really got it. They began to understand that they make decisions every day, and that they bear the consequences of the decisions they make."

The idea of better understanding the decision-making process could have even broader applications in the future, including within the policymaking arena--global climate change, for example--as well as in health care, design and manufacturing, education and other important fields.

For the individual, the research has translated into a startup website, www.ahoona.com, with a unique software package of decision-making tools and templates. Users can choose to receive feedback privately from "friends," or publicly by using the "public" feature. State-of-the-art web-based decision-making software geared toward the layperson will analyze the information, and offer suggestions.

"The field of decision analysis provides a rigorous framework for effective decision-making, but, until now, it has not made its way to peoples' daily lives," Abbas says. "Now there is a way to analyze the recommendations that people give you. You can have these discussions in public, or privately. The public decisions will be stored, because chances are someone will face a similar decision in the future. That way, people can browse 'historic' decisions."

At its simplest, there are three basic elements that form the basis of any decision, he says. They include its alternatives, that is, the different actions we can take; the information, meaning what we know in order to make informed choices; and the preferences, that is, what we like.

There are additional factors involved, such as the frame, "meaning which decision we are really facing, as well as the logic used to make the decision, and the decision-maker, whose alternatives, information and preferences are incorporated," says Abbas. "When these elements are obtained, we can analyze any complex decision."

For example, someone facing medical surgery might weigh the different outcomes against their respective costs.

"Suppose there were two treatment objectives: One might cost more but be less risky. The second might cost less but be riskier. How do you choose?" Abbas says. "How do we make trade-offs between different objects, such as health state and wealth, when we are uncertain about the outcomes we get? Thinking about the elements of the decision can help us make this trade-off."

It is already known that people are risk-averse when it comes to money, he says. "They would rather have a sure thing than something uncertain with the same expected value," he says. "But sometimes there are other factors besides money."

His research focuses on "capturing peoples' preferences over multiple attributes," says Abbas. "For example, the risk attitude over money changes with your health state. Any investments you might make, in the stock market, for example, would be different if you knew you were going to live for 10 years than if you knew you would only live for two more weeks."

This change in preferences over money as health state changes is called utility dependence. "There are many things in life where a decision will change as another thing changes," he says. "It is important to capture this dependence relation between the two attributes if we wish to provide an accurate representation of our preferences in this decision problem. Otherwise, we may end up making the wrong decision."

Utility dependence is a concept that appears in many decisions, both in peoples' daily lives as well as on a broader policy scale.

"For example, in national security decisions, global warming decisions, hurricane events and earthquake recovery decisions, where the attributes may be money spent, lives saved, comfort level and many other natural resources," Abbas says.

Abbas is conducting his research under a National Science Foundation (NSF) Faculty Early Career Development (CAREER) award, which he received in 2008. The award supports junior faculty who exemplify the role of teacher-scholars through outstanding research, excellent education and the integration of education and research within the context of the mission of their organization. NSF is funding his work with about $400,000 over five years.

Additionally, NSF has funded his new website as part of its new Innovation Corps, a program that takes the most promising U.S. academic research and helps turn it into startup technology enterprises. NSF selects 100 science and engineering research projects annually, and awards each $50,000. Abbas was among the first 25 selected for the inaugural group announced in 2011.

"We can go on doing advanced theory and research, but in order to have an impact on society, we have to reach out and spread this knowledge to help society at large," he says.

The online system will provide "a way to analyze the recommendations that people give you that will be relevant to your daily life," Abbas says. "In medical decisions: Which treatment should I have? In education: Which classes should I take? You will be able to make decisions aided by advanced decision analysis methodology. You will not have to make decisions on your own anymore, unless you want to."