On World Environment Day and Every Day, the Stress of Being Ginseng 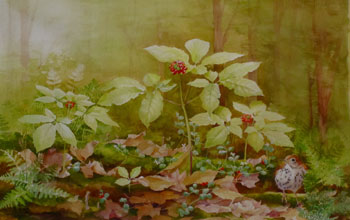 We entered a vale at 5 o'clock, then crossed a run and rode along a rich level for several miles, and under the delightful protection of very tall trees that brought us to a creek...where we lodged surrounded by ginseng.
John Bartram, 1751, "Travels From Pensilvania to Onandaga, Oswego and Lake Ontario in Canada"

Being surrounded by ginseng--a low-growing green-leafed herb of North American forests--may have been common in 1751, but today? Ginseng is under siege.

Biologist James McGraw of West Virginia University should know. Today on World Environment Day, and indeed every day, McGraw says that we can learn much about the environment around us from one small plant.

Funded by a National Science Foundation (NSF) Long Term Research in Environmental Biology (LTREB) grant, McGraw and colleagues peer into the lives of more than 4,000 individual ginseng plants each year to see how they're faring.

"These understory plants are subject to all manner of [environmental] stresses," says McGraw. "After a while, you begin to wonder why there are any left."

Facing a panoply of threats

First, he says, there's harvesting for medicinal uses, "which is widespread and often illegally or at least unethically done. Then we have our four-footed friends--white-tailed deer--which eat a significant number of plants every year."

The plants' next challenge is the growth of invasive species such as multiflora rose and garlic mustard, which compete with ginseng.

The effects of global warming, including summers with heat waves and droughts, add to the burden for these plants of cooler climes. "Ginseng is also affected by ice storms, late frosts and hurricane flooding," says McGraw.

Then these Indiana Joneses of the plant world must survive what McGraw refers to as "natural pests": insect defoliators and fungal pathogens.

"We're just beginning to understand what humans are doing to the forests where ginseng thrives: timbering, suppressing natural fires, mining, clearing land for housing developments, the list goes on and on," says McGraw.

The persistence of a slow-growing and valuable medicinal plant "despite all this," he says, "is a testament to the resilience of nature--and to the stewardship of those land owners who care about protecting biodiversity in their forests."

Species in an extinction vortex

"These dwindling populations face increasing threats that trap them in an extinction vortex," Twombly says.

"McGraw's research relies on long-term data to identify the factors threatening populations of this important forest plant. The results show the knife-edge that separates healthy and unhealthy populations."

The NSF LTREB award "has been critical to our understanding of the 'big picture' of ginseng conservation," says McGraw.

He and colleagues work on one species of ginseng, Panax quinquefolius L., American ginseng.This member of the ginseng family, whose genus name Panax means "all heal" in Greek, hides deep in eastern deciduous woodlands.

The plant was historically found in rich, cool, hardwood forests--from southern Quebec and Ontario south to northern Georgia, and west as far as Minnesota, eastern Oklahoma and northern Louisiana.

"Ginseng populations vary from frequent to uncommon to rare across the landscape," says McGraw, "but they're almost always small, usually fewer than 300 plants."

Medicinal plant for the ages

The species has long been valued for its medicinal qualities, especially by Asian cultures. They've integrated American ginseng into traditional medicinal practices as a complement to native Asian ginseng species.

"In Western medicine, ginseng has exhibited anti-cancer properties in cell cultures," says McGraw. "It's also shown beneficial effects on blood sugar and obesity, as well as on enhancing the immune system for prevention of colds and flu."

"Ginseng shares a part of early American history," says McGraw. "Its roots--the most sought-after part--were first exported to Asia from the United States in the early 1700s."

In one typical year (1841), more than 290,000 kilograms of dry ginseng roots were shipped from North America to the Asian continent.

"Although average root size was larger in the 1800s than it is today," says McGraw, "even a conservative estimate suggests that this represents at least 64 million roots."

Ginseng at the forefront

Harvest of the plant has continued apace, he says, particularly in the Appalachian region, where the sale of ginseng still supplements household incomes.

Ecologists began studying ginseng because of its value as a wild-harvested species, and its decrease in abundance after decades of harvesting.

Now, however, ginseng has become an important model species--a sensitive indicator of the effects of global and regional environmental change on deciduous forests.

"The prominence of American ginseng has led to its use as a 'phytometer' [a gauge] to better understand how change is affecting lesser-known plant species in eastern North America," says McGraw.

The data in his project come from 30 ginseng populations in seven states. "Our study populations are in habitats from suburban woodlots to rich, old-growth forests," McGraw says.

In a paper published this year in the Annals of The New York Academy of Sciences, McGraw and co-authors state that the Asian market has made ginseng North America's most important harvested wild medicinal plant over the past two centuries.

That status prompted a listing on CITES (Convention on International Trade in Endangered Species of Wild Fauna and Flora) Appendix II. All species on Appendix II are susceptible to extinction in the absence of trade controls.

Most states with ginseng populations are converging on a uniform start date for harvesting--Sept. 1. "That allows time after harvest for planting ripe seeds that will lead to recovery of the plants," McGraw says.

Since forests are, for the most part, open to everyone, ginseng will continue to be harvested as long as there is immediate profit to be made, scientists believe.

Successful sustainability in such open access habitats, they say, depends on management of the resource by those who actively harvest it.

McGraw and colleagues' research shows that ginseng harvesters willing to employ a stewardship strategy gain the most benefit by harvesting when seeds are ripe, usually in autumn months, then planting the seeds to ensure high germination rates.

September is a summertime away. But in northeastern forests, ginseng leaves have already unfurled.

"Now they face a gamut of environmental challenges," says McGraw. "They're rooted in place, left with whatever nature--or more likely humans--dish out. If we want ginseng to be part of the future landscape, we had best tread very carefully."

"Ginseng is not everywhere common," wrote Swedish naturalist Peter Kalm in 1749. "Sometimes you may search the woods for several miles without finding a single plant. Round Montreal they formerly grew in abundance, but there is not a single plant to be found, so they have been rooted out."

By three centuries later, northeastern forests may be empty--at least of an unassuming and "all healing" herb named ginseng.