By dark of night, how do bats smell their way to fruit? 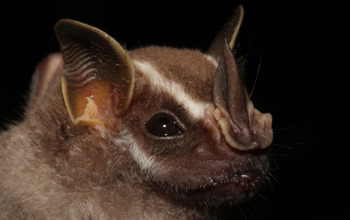 How do we smell? The answer lies in the 1,000 or so genes that encode what's known as olfactory receptors inside our noses.

This gene superfamily constitutes 3 to 6 percent of a mammal's genes.

But scientists don't completely understand what odors bind to which receptors, and how this complex process translates into interpreting a particular smell.

In fact, little is known about how olfactory receptors function in mammals, or how this large gene family has evolved in response to different evolutionary challenges.

The findings offer new insights that link olfactory receptors with the odors they bind.

The research highlights the importance, the biologists say, of exploring diversity in nature to understand genome functions and evolutionary history in mammals.

Evolutionary biologists Liliana Davalos of Stony Brook University, Emma Teeling of University College Dublin and colleagues report their results in a paper published in this month's' issue of the journal Molecular Biology and Evolution.

"This study provides new insights into the mechanisms that have allowed bats to diversify their diets so extensively," says Simon Malcomber, a program director in the National Science Foundation's Division of Environmental Biology, which funded the research.

This research was also supported by the Science Foundation Ireland and the Irish Research Council.

"We knew that animals that live in various ecological environments--whales, bats, cows--have evolved different suites of olfactory receptors," says Davalos. "That suggests that the ability to smell different odors is important for survival."

Since these lifestyles evolved so long ago, she says, it's difficult to tell what forces have shaped the repertoire of olfactory receptors.

Two large groups of bats branched out since diverging about 64 million years ago. These groups separately evolved specialized echolocation and a diet based on fruit.

The patterns have arisen twice, once among New World leaf-nosed bats that feed primarily on figs and another among Old World fruit bats. The bats feed on variety of fruits, including figs, guavas, bananas, mangoes and other tropical fruits.

Could their evolutionary patterns help explain their olfactory receptors?

Finding fruit by dark of night

Although the olfactory receptors are similar, the distinctive repertoires have arisen in different ways in New World and Old World bats.

That suggests, Davalos says, that independent mechanisms have shaped this part of the bat genome in response to the challenge of finding fruit by dark of night.