Study suggests survival may not always be about competition

New research findings contradict one of Darwin's lesser known hypotheses, which encourages prioritizing species for conservation based on evolutionary or genetic uniqueness 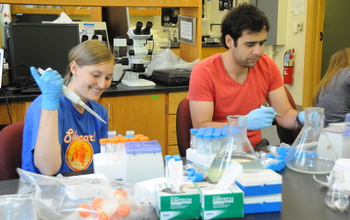 One of Charles Darwin's lesser known hypotheses posits that closely related species will compete for food and other resources more strongly with one another than with distant relatives, because they occupy similar ecological niches. Most biologists have long accepted this to be true.

Thus, three researchers were more than a little shaken to find that their experiments on fresh-water green algae failed to support Darwin's hypothesis--at least in one case.

"It was completely unexpected," says Bradley Cardinale, an associate professor in the University of Michigan's school of natural resources and environment. "We sat there banging our heads against the wall. Darwin's hypothesis has been with us for so long, how can it not be right?"

The researchers--who also included Charles Delwiche, a professor of cell biology and molecular genetics at the University of Maryland, and Todd Oakley, a professor in the department of ecology, evolution and marine biology at the University of California, Santa Barbara--were so uncomfortable with their results that they spent the next several months trying to disprove their own work. But the research held up.

"The hypothesis is so intuitive that it was hard for us to give it up. But we are becoming more and more convinced that he wasn't right about the organisms we've been studying," Cardinale says. "It doesn't mean the hypothesis won't hold for other organisms, but it's enough that we want to get biologists to rethink the generality of Darwin's hypothesis."

The assumptions underlying Darwin's hypothesis are important for conservation policy, since they essentially encourage decision-makers to prioritize species preservation based on how evolutionarily or genetically unique they are. "We don't have enough time, people or resources to save everything," Cardinale says. "A large number of species will go extinct and we have to prioritize which ones we will save.

The scientists did not set out to disprove Darwin, but, in fact, to learn more about the genetic and ecological uniqueness of fresh-water green algae so they could provide conservationists with useful data for decision-making. "We went into it assuming Darwin to be right, and expecting to come up with some real numbers for conservationists," Cardinale says. "When we started coming up with numbers that showed he wasn't right, we were completely baffled."

The National Science Foundation is supporting the work with $2 million over five years, awarded in 2010.

The researchers sequenced 60 species of algae most common in North America and can describe with a high certainty their evolutionary relationships. "We know which ones are ancient and have become genetically unique, and which are new and recently diverged," he says.

They also sent graduate students into natural lakes to gather samples, including one lake with "the most spectacular group of green algae," as well as something else, prompting the nickname "Leech Lake."

When the students stood in the water to collect their samples, "the entire bottom of the lake would start moving toward them," Cardinale says. "They would congregate on their boots, and start crawling up their legs. The challenge was to get the samples before the leeches got into their waders."

Samples obtained, they put species that have different evolutionary histories into bottles and measured how strongly they competed for essential resources such as nitrogen, phosphorus and light.

"If Darwin had been right, the older, more genetically unique species should have unique niches, and should compete less strongly, while the ones closely related should be ecologically similar and compete much more strongly – but that's not what happened," Cardinale says. "We didn't see any evidence of that at all.” They found this to be so in field experiments, lab experiments and surveys in 1,200 lakes in North America.

"If Darwin was right, we should've seen species that are genetically different and ecologically unique, doing unique things and not competing with other species," he adds. "But we didn't."

Traits and the quality of competition

Certain traits determine whether a species is a successful competitor or a poor competitor, he says. "Evolution does not appear to predict which species have good traits and bad traits," he says. "We should be able to look at the Tree of Life, and evolution should make it clear who will win in competition and who will lose. But the traits that regulate competition can't be predicted from the Tree of Life."

The scientists have a few ideas of what may be going on, and why Darwin's hypothesis is incorrect, at least for this group of organisms.

"Organisms like algae can be plastic. Maybe they all have the same genes that do the same things and can turn them off and on at different times," he says. "Maybe they sometimes can flip a switch for nitrogen on or off, or all at the same time. If we are correct, and they are not diverging in the genes that control competition, maybe they are diverging in other genes."

Darwin "was obsessed with competition," Cardinale says. "He assumed the whole world was composed of species competing with each other, but we found that one-third of the species of algae we studied actually like each other. They don't grow as well unless you put them with another species. It may be that nature has a heck of a lot more mutualisms than we ever expected.

"Maybe species are co-evolving," he adds. "Maybe they are evolving together so they are more productive as a team than they are individually. We found that more than one-third of the time, that they like to be together. Maybe Darwin's presumption that the world may be dominated by competition is wrong."

Cardinale's broad research goal is to gain a better understanding of how human alteration of the environment affects the biotic diversity of communities and, in turn, the impact of this loss on fluxes of energy and matter required to sustain life. "I focus on this because I believe that global loss of biodiversity ranks among the most important and dramatic environmental problems in modern history," he says.

Related Awards
#1332342 EFRI-PSBR: Biodiversity & Biofuels: Finding Win-Win Scenarios for Conservation and Energy Production in the Next Century
#1046121 Dimensions: Collaborative Research: Can Evolutionary History Predict How Changes in Biodiversity Impact the Productivity of Ecosystems?