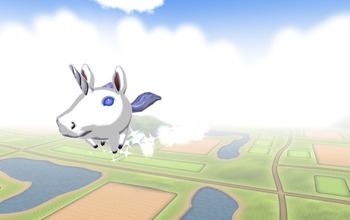 A game player uses Thalia, a wearable interactive system, and then smiles in order to keep a unicorn in flight as it jumps through rainbows.

Can smiling for a video game make us happy? "Unicorb," a video game controlled by facial muscles, aims to do just that.

"Thalia is the muse of joy," said James Wu, a University of Washington graduate student in bioengineering. "Many studies have shown that just the physical act of smiling improves your overall mood and mental health."

Thalia and "Unicorb" were created by Wu and fellow University of Washington students Karl Marrett, Tyler Maxfield and Tiffany Youngquist in their Tech Sandbox course. Undergraduate and graduate students sign up for the class as a team and compete in the annual Tech Sandbox competition.

In 2014, five teams competed to win tablets and a chance to demonstrate their understanding of neural engineering. The winning project was vHAB, a virtual reality game that helps stroke patients regain motor control of their hands.

"They're supposed to create projects that demonstrate the core principles of neural engineering, and they should also be things that can work as educational demos," explained Lise Johnson, the instructor of the course.

Johnson is also the education manager at the Center for Sensorimotor Neural Engineering, a National Science Foundation (NSF) Engineering Research Center. "We want them to be fun and interesting and maybe marketable, commercializable."

What's in a smile?

The competition is a way to encourage students and faculty to try out all the equipment in the research center.

The Thalia team members initially wanted to make use of an electroencephalogram, which measures signaling from the rearmost portion of the brain. They ultimately chose to use an electromyogram (EMG), because the electrical signaling from muscles is more robust.

EMGs have been used extensively to study facial muscles, and the novelty of Thalia is in the implementation of this information in a video game.

The students chose to place electrodes on the muscles around the mouth and also the muscles above the eye  that move in a particular way when a person is happy or surprised. The electrodes capture muscle signaling, which is then amplified and interpreted into controls for flying and speed in "Unicorb."

"The control signals are designed so you have to use your smiling muscles and surprise muscles," said Youngquist, a bioengineering graduate student. "The idea is that through facial feedback, we can kind of enforce a state of happiness or positivity in the user."

Team Thalia members believe that further development of "Unicorb" could lead to its use as a depression therapy, particularly for young children.

An experiment in progress

While there are no prerequisites for Tech Sandbox, the course has mainly attracted bioengineering students, with a few students from other disciplines.

Marrett, whose research background is in neurology, was curious to further his understanding of neural engineering through Tech Sandbox. He said, "One of the greatest things you can learn when trying to build a technology in only ten weeks is what ideas will work and what will not."

The Tech Sandbox Competition was first piloted in 2013 as an extracurricular activity.

"The winning project from last year has been used in tons and tons of educational and outreach demonstrations," said Johnson, referring to WrestleBrainia 3000. "Everyone had a good time doing it, so we thought that it would be a good thing to continue."

WrestleBrania 3000 is an arm wrestling game that uses EMG signals from the arms of two human competitors to control wrestling robot arms.

One of the creators of WrestleBrainia, Dev Sarma, was the teaching assistant for Tech Sandbox and helped the students with their projects throughout the quarter.

"This competition has allowed me to work with graduate students who are quite knowledgeable in their field," said Maxfield, a bioengineering undergraduate student. "It's been quite beneficial to have the group atmosphere of being able to come up with ideas and hash them out logistically."

Along with access to expensive equipment at the Center for Sensorimotor Neural Engineering and guidance from Sarma, students received advice from Johnson. In contrast to 2013's pilot program, Johnson requested progress reports from each team in order to advise them against bad ideas and to keep them on track for finishing their devices.

"It's kind of an experiment in progress," explained Johnson. "There are no lectures and there is no curriculum. One of the good things about offering it as a class is that there's some sort of incentive for people to do a good job."

The CSNE is expanding the Tech Sandbox model to partner institutions MIT, Morehouse College, and San Diego State University to evaluate potential scalability of this unique experience, particularly for institutions that may have fewer resources or graduate students. These activities would help to encourage participation by students traditionally underrepresented in science and engineering.

"The awareness drawn by the Tech Sandbox to cognitive, psychological and wellness aspects of neural engineering is an outgrowth of interdisciplinary activity at the center," said Keith Roper, the NSF program director who oversees the center, "which engages medical and health professionals with engineers to use technology to both advance science and benefit society in important ways."